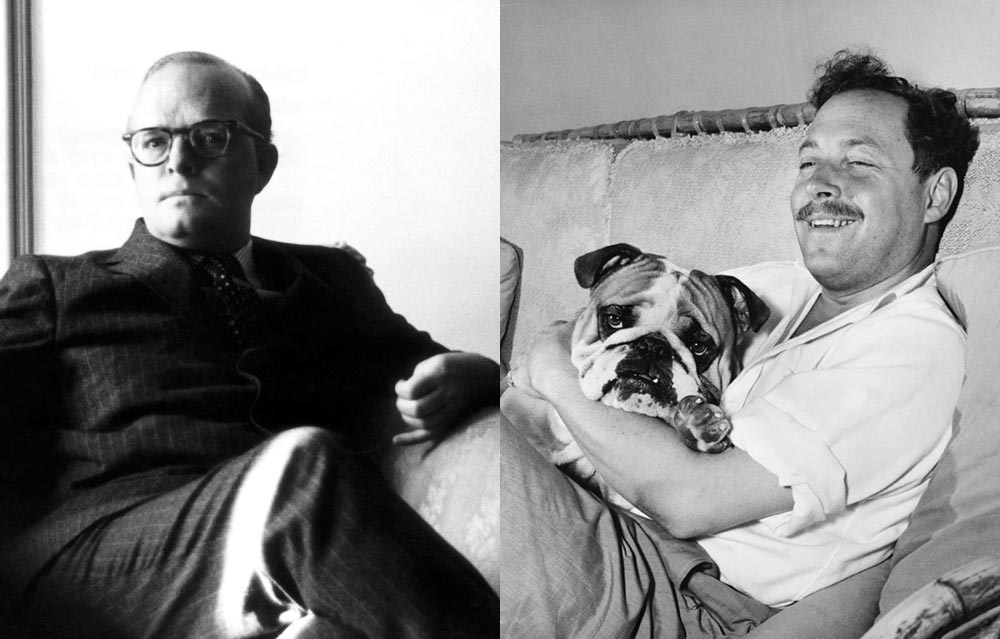 Lisa Immordino Vreeland’s new documentary Truman & Tennessee: An Intimate Conversation is an invaluable time capsule of a lost era, when writers were A-listers and pillheads, glamorous and abject, otherworldly and unpredictable. Her film captures two of the most charismatic and brilliant figures of that era, and their long friendship and its chaotic unraveling.

In a last burst of productivity before his death from alcoholism at 59, Truman Capote developed his so-called “conversational portraits.” Collected in the last section of Music for Chameleons (1980), these were fine-tuned descriptions of days spent with figures like Willa Cather, Marilyn Monroe, Bobby Beausoleil, and a New York day maid.

It was a total reversal of his previous trajectory: with his non-fiction novel about a Kansas murder, In Cold Blood (1965), he’d scrubbed himself out of the facts, trying to “keep [himself] as invisible as possible.” But with the portraits, as he explained in the preface to Chameleons, he “set [himself] center stage.”

Tennessee Williams shared much with Truman Capote—they were both gay, Southern, alcoholic, and short (Capote was 5’3”, Tennessee 5’6”). They both had bulldogs. And most importantly, they both blended almost hysterical bon vivance with a sense of, as Dotson Rader put it about Tennessee, “unadmitting sadness, an arresting loneliness that [was] articulated only in [their] work.” But at their best, Tennessee and Capote alike combined joviality and abjection, mirth and bitterness, a socialite exterior with fathomless, pitch-black interiors. And they produced, for years, characters with similar contradictions, dancing and laughing and blabbing as their worlds fall apart.

All this to say that I went into Truman & Tennessee: An Intimate Conversation expecting just that: an intimate conversation between two artists of the first order, ones who were, as Tennessee put it, united in “bitchery” until it dissolved into bitterness. On that count, I was disappointed: the closest we get to a conversation is when Vreeland presents Capote and Tennessee’s appearances on David Frost’s talk show in split screen, so for a moment we can imagine they’re together. The “conversation,” here, is figurative; actors read from Capote and Tennessee‘s interviews, diaries, and correspondence, often but not always to or about each other (Jim Parsons and Zachary Quinto, respectively). This is really two parallel, and occasionally overlapping, portraits.

And as often occurs in that genre, Vreeland sometimes adulterates her excellent source material—these were, after all, two of the most verbally gifted Americans of the 20th century—with cliché and unreflective aesthetic choices. Much of the film is narration set over mediocre B-roll, sometimes garish graphics, and uninspiring music: beachscapes abound, for no obvious reason. For the four minutes preceding the title card, we indeed dwell on this somewhat maudlin plane. But the film significantly improves with the video footage of both writers; Capote, inexplicably, has a prominent gash on his head, and Tennessee seems to be on a great deal of sedatives. Both are inscrutable and charming, not falling into any recognizable personality type.

And of course, both are from an almost unrecognizable society. It’s hard to imagine that just fifty years ago, writers of a high order were on the covers of national magazines and interviewed on popular talk shows.

While not the most innovative cinematic experiment, Truman & Tennessee is enjoyable and worth watching. Those who are fans of Truman or Tennessee will love the consistently interesting and inventive words of their idols, as well as the highlight reels of these photogenic men; the uninitiated will have a crash course in their lives and work, and hopefully be inspired to continue the conversation.

Truman & Tennessee: An Intimate Conversation is showing at Film Forum