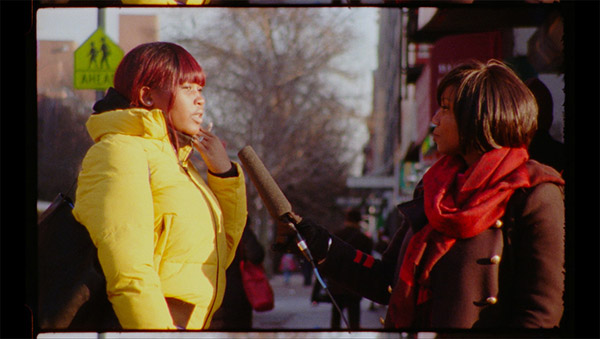 Well, True/False may have been the last US film festival of 2020. Once COVID-19 goes endemic and things settle down maybe we’ll have another festival down the line, but things will be very different. Fashion particle masks and chic black nitrile gloves will be de rigueur and travel-size Purel bottles clipped to backpacks will be as ubiquitous as Air Pods once were. Proper hand-washing technique will no longer be the exclusive provenance of obsessives and hypochondriacs, hawking loogies in public will be a habit associated with only the irremediably antisocial, and, who knows, maybe theater design will undergo radical change to allow for the CDC-recommenced 6-foot interpersonal distance. Prepare for lots of leg room.

In the meantime, it’s up to all of us to make sure that the misanthropic fantasies of the Zack Snyders and Robert Kirkmans of the world don’t come tragically true. As the extreme challenges faced by Italy’s overwhelmed healthcare system and COVID's exponential spreading pattern have shown us, public health crises of this magnitude are no joke, and not to be treated as if only sick, poor, or old people need to worry about them (even if those people have to worry about them disproportionately). A pandemic doesn't mean kick an old lady in the teeth so you can grab the last can of baked beans at Trader Joe's, or drive around the neighborhood in your armored SUV with your Bushmaster, or attend opening galas at elite cultural institutions in ironic disco ball facemasks. It means organize politically to guarantee paid sick leave to all workers, make Medicare for all happen, and think of the public good rather than just your own.

As everyone knows who wasn't already a shut-in one of the immediate effects of worldwide social distancing measures was the abrupt cancellation of all cultural and sporting events. But during the long weekend of March 5–8 in quaint Columbia, MO, hints of impending social disruption were still only dropping gradually. For four days 15,000 festivalgoers—from local mom-and-daughter teams thirsty for Culture to jaded coastal industry insiders—sat together in dark rooms for hours at a time and milled about in the mild spring sun of the Show-Me State. By Saturday night, when SXSW had just announced its cancellation, a vaguely crepuscular mood had crept into the crowd, but there were enough intoxicated UM bros flip-flopping down the main drag and being vocally homophobic to distract from the more abstract threat of Contagion. 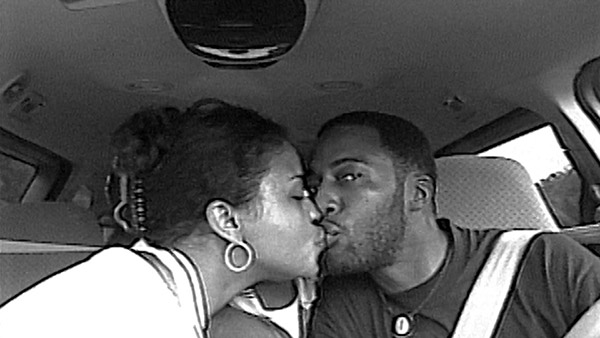 My weekend in Columbia started with Garrett Bradley's Time, which combined narrative catharsis, glossy production, and inspiring ethico-political discourse so effectively that it almost felt too perfect for opening night. It follows Fox Rich, a single black mom raising six boys in New Orleans, as she spearheads a David-and-Goliath campaign to obtain clemency for her incarcerated husband, Robert, and get him out of the notorious Louisiana State Penitentiary at Angola. In 1999, Fox and Robert tried to rob a bank to fund a streetwear store they wanted to open ("Desperate people do desperate things, it's as simple as that"). Robert got 60 years without chance of probation, parole, or suspension, a sentence the family's grandmother describes as a "personal vendetta" on part of the criminal justice system. Fox is a self-described prison abolitionist, and by lending her a platform the filmmakers throw their support behind this growing movement. Fox takes the carceral state to task with well-deserved vitriol, but the film's focus stays squarely with the love and hope that animates her and her sons in their quest to see their father again. I know I wasn't the only audience member with tears streaming down my face.

Bill and Turner Ross's Bloody Nose, Empty Pockets was, by contrast, an exercise in riff-raff sentimentalism. With its warm color palette and its cast of hopeless yet jovial misanthropes, it was a tonal 180 from Time. Its aesthetics are decidedly lo-fi, the lens at times as grimy as the bar counter and the jukebox grinding out tinny A$AP Rocky and Spice Girls in the background. But we get more than just toothless boomers growling incoherently about the jobs they're ignoring to spend the day at the Roaring 20s, a Las Vegas dive bar on the verge of closing its doors for good. It's also a lament for the disappearance of a city that was once as multifarious and vibrant as the bar's patrons. "This whole town is losing its character," the bartender complains. "Fuckin Celine Dion can have it." 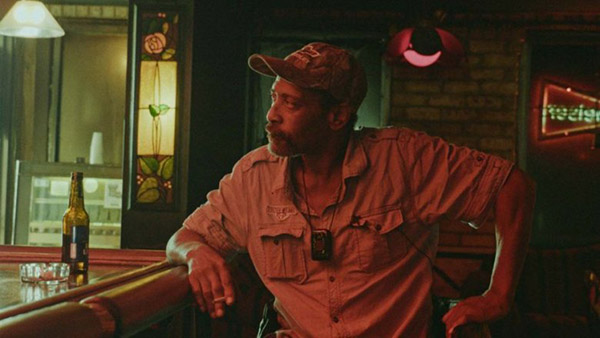 The next morning I caught Kirsten Johnson's new hybrid doc, Dick Johnson Is Dead, in which she helps her elderly and neurologically deteriorating father come to terms with the idea of his own death by staging different ways it could happen. An AC unit falls out a fourth-floor window as he happens to be passing underneath; a careless construction worker whacks him with a beam and punctures his carotid artery; he trips on the stairs and breaks his neck—all these scenarios are realized with stunt doubles, SFX makeup, and jarringly graphic glee, playing jump scares for laughs. Most of Johnson's Netflix production money was sunk into sequences of her dad in heaven, where he is forever young, his wife is still alive, and he hangs out for eternity with Buster Keaton, Farrah Fawcett, and Freud. Besides hybridizing genres she also charts new tonal terrain, alternating rapidly between hilarity and grief, tenderness and near-callousness.

In the afternoon I found myself in Columbia's finest (and only) repertory/arthouse theater, Ragtag Cinema, watching Elegance Bratton's Pier Kids about LGBTQ+ youth who hang out, work, and sometimes sleep in the waterfront parks abutting the Hudson between Chelsea and the West Village. After some stark statistics (there are two million homeless youths in this country, half of them queer, and 40% of that half are youths of color) we're introduced to Krystal, Aniyah, Cheetah, Jada, and other young trans and queer denizens of the piers who discuss the sense of family they've cultivated (gay fathers, gay daughters), the ball culture they're keeping alive (Coldest Winter Ever Ball), and ways they've figured out to keep themselves fed (e.g. "confiscating" items from the supermarket or pharmacy). Besides regular harassment from the NYPD and transphobic johns, many of them have to deal with unsupportive parents or family members, like Krystal whose mother and aunt refuse to recognize her identity: "It's not about respect or disrespect. It's about he's my son." The film rambles a bit and lacks an arc, but as Bratton pointed out in the Q&A, he did this partly in defiance of all the "Joshes, Jeremys, Lukes, and Andrews" he had to talk to when seeking funding. They all wanted an uplifting ending in which some of Bratton's participants get into college or get decent jobs, but Bratton refused them this hopeful note. 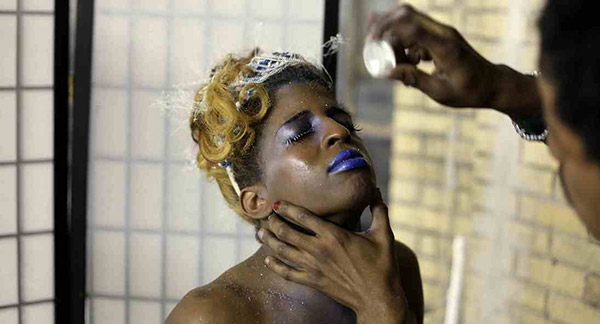 Ja'Tovia Gary's The Giverny Document is an essay film about the continuing colonial oppression of people of color in America. Audio from the livestream of Philando Castile dying in his car after being shot by Saint Anthony police is intercut with archival footage of Fred Hampton, Claude Monet, and Nina Simone as well as contemporary interviews with African American women in Harlem about how safe they feel in the street. Gary herself makes frequent cameos, alternating between striking ironic poses and screaming therapeutically in Monet's garden at Giverny. Gary's piece is at once urgently political, intensely personal, and semantically open, an expression of rage and frustration and disbelief about the contradictions of the "post"-colonial condition.

Ina Luchsperger's Catskin follows a grandmother, father, and adolescent son living together in rural Bavaria as they gradually open up to the camera about their feelings on German history, the meaning of the refugee crisis, and Bavarian identity. The huge Confederate flag adorning the side of their barn points to one of the film's major themes: in some ways the German South thinks of itself as analogous with the American South, a heartland ignored and marginalized by the political elites and with a proud past that official historiography tends to erase. This is certainly the narrative that Markus Söder, the head of the Christian Social Union, promotes at a rally the family attends, an event so tacky and sentimental with its oompah bands, Fraktur-lettered signage, and dirndl-sporting beer wenches that it would be endearing if it wasn't so menacing. When the father laments the erosion of the German Volk's shared spirit and compares the contemporary Green Party to the fanatical Nazis who still believed in total victory in 1945, saying both share a tragic German idealism, we start to see his true colors. Luchsperger avoids easy conclusions, however, and what emerges is a complex portrait of a family caught in the gears of often inscrutable historical processes. 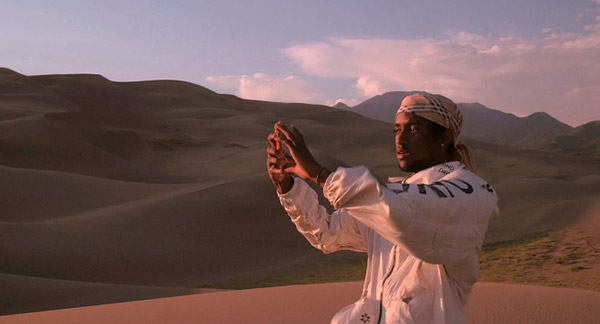 One of the most exciting surprises of the festival lineup was also the most apocalyptic: Crestone, which follows a collective of SoundCloud rappers living on a miserable commune in the desert near Crestone, Colorado, as they grow weed, record music, and forage for food. Champloo Sloppy, SadBoyTrapps999, RyBundy, Benz Rowm, and Huckleberry Israel roll blunts, give each other neck tattoos, microwave Cup Noodles, and let the dishes pile up as they fill in director Marnie Ellen Hertzler (their former high school friend) on their worldviews (e.g. Sloppy is a flat earth agnostic: "I don't see no curvature, and I'm pretty high up on this mountain"). Their project doesn't seem to have much longevity, as they rely mostly on ransacking ruined dwellings for shelf-stable foodstuffs, but what it lacks in scalability it makes up for in sheer earnestness. These young men (yes, it's all dudes) are committed to living outside the crushing confines of conventional society (to some degree) and weren't going to wait until that goal was tenable. (At least they shouldn't have much trouble self-isolating for the next few months.) Hertzler incorporates Cole Bennett-style animation, social media aesthetics, and contemplative voiceover to make Crestone a fascinating hybrid, a short attention span extravaganza for the post-future generation.

Some of the themes I encountered at True/False, themes of mortality, isolation, border security, and incarceration, had a different tenor than they do now. So much seems to have changed in the past week, socially, economically, and philosophically, that the world of ten days ago feels like a distant memory. Still, we're all doing our best to adjust to this new reality, helping each other in every way we can, communicating, and sharing knowledge and resources. It's ironic that a threat that forces us to keep physically apart has brought us spiritually closer together, but I take solace in seeing how rapidly a certain realization is dawning upon us: now, more than ever before in our lifetimes, it's absolutely imperative to think collectively rather than individualistically. Lessons will be learned in the coming months that will not be easily forgotten, and our collective sense of a shared fate as a species on this planet will be stronger for it.

So, dear Screen Slate readers: stay safe, stay healthy, and keep streaming. See you on the other side.