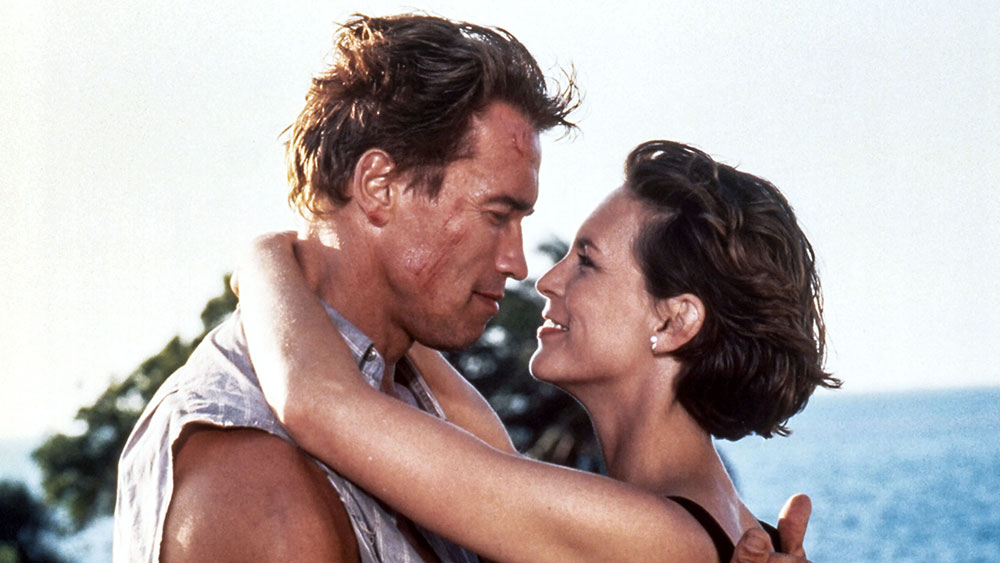 In between melting the minds of moviegoers with Terminator 2: Judgment Day (1991) and setting all-time box-office records with Titanic (1997), James Cameron made one other film: a $115 million, 141-minute, action-fueled rom-com titled True Lies (1994). On paper, it sounds like an odd gamble: pair one of the world’s biggest action stars (Arnold Schwarzenegger, coming off the first two Terminator films with Cameron) with a well-known actress (Jamie Lee Curtis), add a supporting cast of comic relief (Tom Arnold, Bill Paxton), throw them all into a spy narrative that’s also a comedy about the trials and tribulations of marriage and raising a family in the 1990s. If it sounds more European than American, that’s because it is.

Based on a 1991 French comedy titled La Totale! (whose poster art features even more guns than that of its remake), True Lies builds on the rather convoluted premise of its precursor—a married man has been living a double life as a secret agent, finds out his wife is having an affair with a used car salesman (a strangely specific plot point in both versions) who is pretending to be a spy himself, and creates a scheme that turns the wife into an agent in order to keep his marriage afloat—by adding a whopping forty minutes to its runtime and filling almost all of that with operatic action set pieces. Though both films may work in their own regard as successful comedies, only one of them is a great action film.

True Lies, though not as cutting-edge as what Cameron and his team did with Terminator 2, features some of the best Hollywood action scenes of the ’90s. It opens with a sequence involving snowmobiles, explosives, machine guns, and Tom Arnold attempting to drive on ice, and it ends with Schwarzenegger piloting a fighter jet wherein a terrorist ends up attached to one of the plane’s missiles. (Before shooting it he deadpans, “You’re fired.) In between these bookends, there’s a horse chase, a bathroom brawl, a scene where Schwarzenegger escapes captivity and uses surgical instruments and a crowbar to kill his captors, and yes, the most provocative striptease of 1994. Cameron’s successful marriage of action and comedy turned True Lies into a massive success with a nearly $400 million worldwide gross.

In hindsight, True Lies feels like a swan song to the adult blockbuster—at least the type that would be given a robust budget and lead by bonafide movie stars and not titled Fifty Shades of Gray. It feels like meat-and-potatoes genre filmmaking by a filmmaker who did just reinvent the wheel with his prior film, allowing it to feel at once classical and cutting edge. Nevertheless, it’s difficult to actually watch True Lies now. Since its DVD release in 1999, there has been no subsequent home video release of the film, and it’s been pulled from streaming and VOD services. All the more reason to see True Lies on 35mm.

True Lies screens this morning and tomorrow, August 13 and 14, on 35mm at Nitehawk Williamsburg.