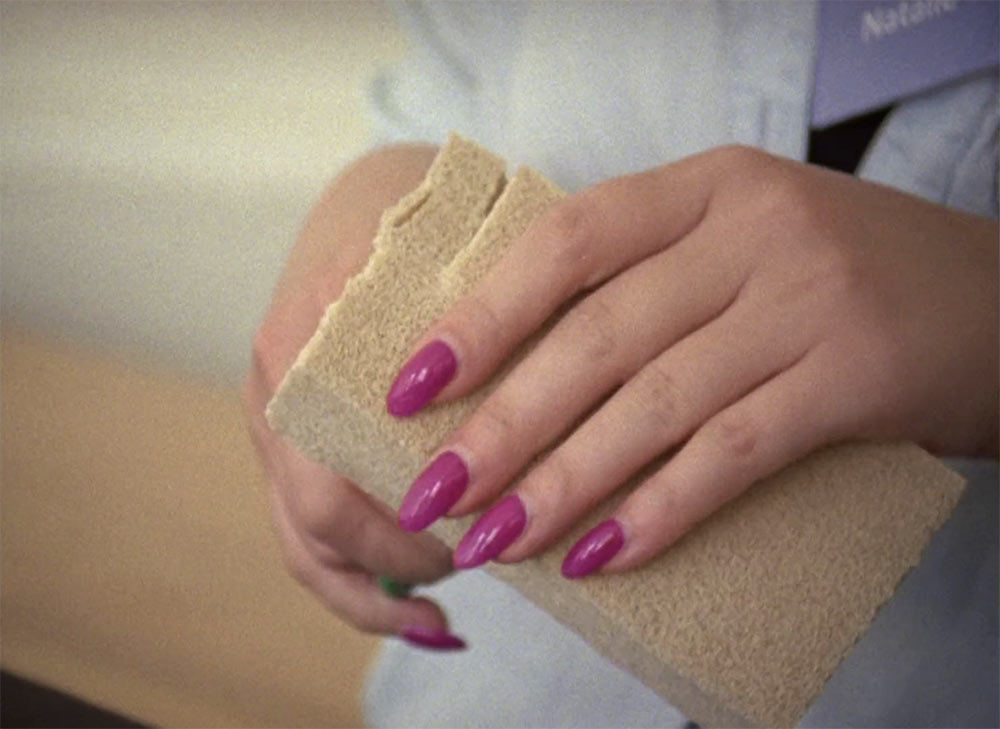 Jessica Sarah Rinland has a way with her hands. And with others’ hands, too. In her 2019 Those That, at a Distance, Resemble Another, she shows hands making molds, scraping dirt, and tracing patterns on urns, sometimes bare but often clad in vibrant nitrile gloves. Her ensemble of hands tells the hidden stories of art and artifact conservation, which is the subject of her tactile meditation on the processes, decisions, and physical labor involved in the preservation and revitalization of totemic objects housed in museums around the world.

She has mentioned that her interest was sparked by learning secondhand of a cabinet filled with ivory in the offices of the Victoria & Albert Museum in London. From this oddity, she departed on a roving study of the fraught history of ivory’s circulation and its present use in museological conservation, going as far as implicating herself in the creation of a replica elephant tusk. The film moves through Rinland’s intricate process working with the replica at a conservation center at Harvard alongside footage from museums and ecological centers in England and Brazil, all shot in textural 16mm.

The labor is both slow and exacting, emphasized by the close-ups on the dutiful hands of conservators, technicians, ceramicists, volunteers, and the filmmaker herself (always identifiable by her flawless pink nail polish) who work with a panoply of instruments and materials with inventive precision. How satisfying is the opportunity to witness, in real time, the replica elephant tusk molded out of clay slip through hands covered in the quick-hardening material, where every movement and twitch forms a wrinkle in the slippery skin, undeniably akin to the ancient appearance of an elephant’s leathery hide.

The cabinet of ivory is introduced near the end of the film, which follows a V&A conservator as he inelegantly rearranges the specimens on its packed shelves. I found it hard to conceal my nervous laughter as the conservator fumbled through his task, watching the confiscated ivory spill out of the cabinet as he sometimes unsuccessfully stacked an arbitrary collection of tusks, carved figures, and miscellaneous shards atop one another. After seeing so many engrossing scenes of hands engaged in careful and deliberate work, this honest image depicting the practicalities of such specialized labor forms a thoughtful parallel. Those That, at a Distance is a convincing enough argument that conservators are magicians, imbuing objects with new life. But, with her visual reverence and insatiable curiosity, Rinland offers that they are also very human, working their way through and with time.

Those That, at a Distance, Resemble Another is streaming on Mubi.