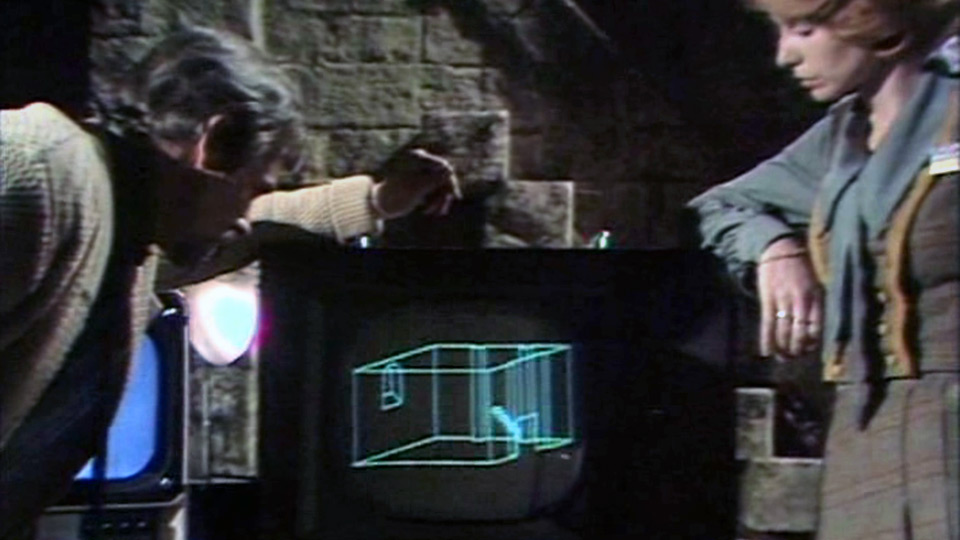 In 1972, BBC Two presented a feature-length teleplay as part of its annual “A Ghost Story for Christmas” series of the ‘70s: The Stone Tape, directed by Peter Sasdy and written by Nigel Kneale. Kneale was already well-established as a television writer, having, amongst others, created science hunk Bernard Quatermass, who first made his appearance in British TV serials but was also the protagonist of several Hammer films, including The Quatermass Xperiment and, my personal favorite, Quatermass and the Pit (a truly haunting film of urban/cosmic horror). These exemplified Kneale’s abiding interest in the clash between modern science and ancient superstition, which similarly provides the eerie tension of The Stone Tape.

A crack team of wily scientists under the aegis of Ryan Electric Products has gathered in Tasker Lands, the abandoned ancestral home of the Tasker clan. Unused since World War II when it served as a temporary bunker for “the Yankees,” the stone fortress is ideally remote, as their project is the top secret search for a better recording medium. Much of the building’s interior has been modernised and filled with sparkling white gadgets, the rat-a-tat of typewriters, and constantly growing piles of printouts. Jill, the star programmer and lone woman of the group (and the — married — lead scientist’s lover), arrives in a typical smart suit, immediately shaken by a brush with death in the building’s buzzing parking lot; her discomfort increases once inside the “laboratory,” and reaches a paralyzing pitch in an un-updated, cavernous room featuring a creepy staircase that goes to nowhere. Apparently the workmen refused to touch the space due to mold, but the real cause for concern quickly makes itself known, as a hair-raising shriek echoes in the dank, stone-walled room. The team (almost) wholeheartedly acknowledges a supernatural presence as the same nightmarish audio “replays” over and over again (with increasingly nerve-wracking effect), and quickly pivots to attempting to measure the process keeping the “ghost” alive. As the lead scientist has it, “Let’s say it’s a mass of data, waiting for a correct interpretation.” Is this the answer to their recording-medium quandary? Or something more sinister, that resists quantification?

This all unfolds within the first 20 minutes of the brisk television film, which proceeds at an edge-of-your-seat clip — and it’s not just this economical pace that marks The Stone Tape as unique to the genre. Rather than, as might be expected, delving into some gruesome mishandling underlying the late underservant Louise’s death (or the perhaps Druidic origins of further “recordings”), the film wrestles with a potential scientific treatment of the haunting and the perils of applying modern technology to the unknowable, with tools-of-another-trade immediately reminiscent of the bizarre equipment trotted out on each episode of Ghost Adventures — the white noise and malleable interpretability of which are perhaps more frightening than the so-called haunting being investigated. Following the film’s original broadcast, the hypothesis of “residual haunting,” that ghosts are recordings of past events made by the natural environment, often preserved via the excess energy of a traumatic incident, came to be known as the “Stone Tape Theory.”

The singularity of Kneale’s obsession with the juxtaposition of science and superstition won’t be lost on those familiar with his connection to Halloween III: Season of the Witch; the film’s original screenwriter, Kneale insisted that his name be removed after killer drones and gory death scenes were added. Beyond these, the film matches his screenplay closely, most recognizably in the “original Halloween” speech given by evil mask-maker Conal Cochran. John Carpenter apparently remained a fan of Kneale’s work, using the pseudonym “Martin Quatermass” for his Prince of Darkness script — a film which echoes The Stone Tape in both content and, in my opinion, eerily creepy and disturbing effect.

The Stone Tape is available to rent on Amazon for $1.99.