Star in the Night 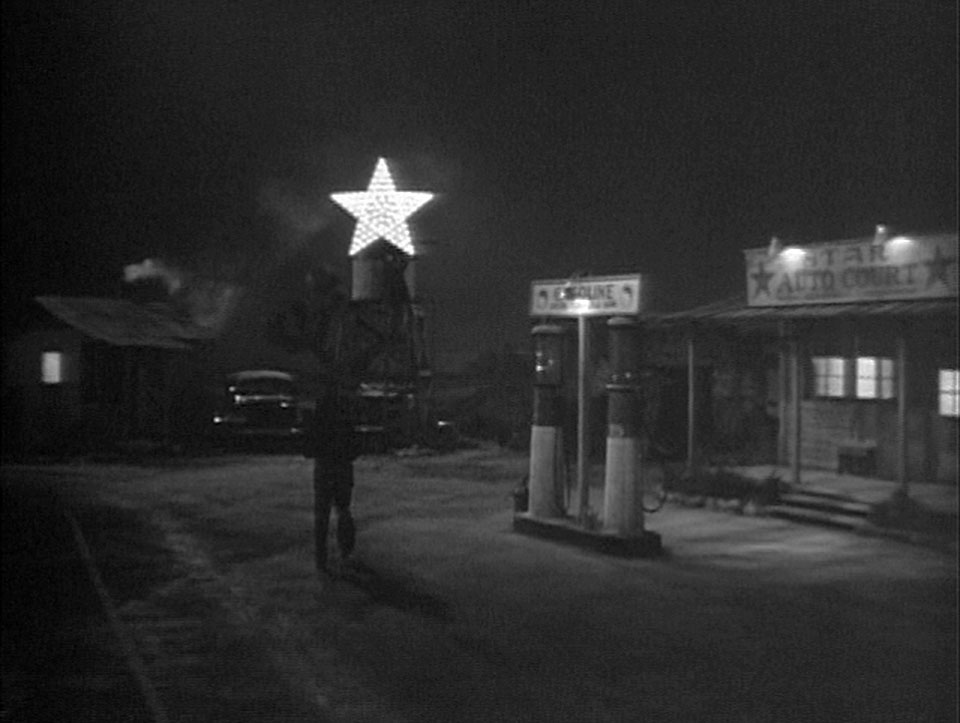 In Don Siegel’s directorial debut, the short film Star in the Night (1945), it is Christmas Eve, and a baby is about to be born in a southwestern roadside motel owned by one Nicky Catapoli (J. Carroll Naisch). A crabby Italian immigrant, he is introduced erecting his very own guiding star, a piercingly bright, neon sign designed to attract customers from miles around.

The act is somewhat contradictory, as he seems to have had his fill of people: “What-a ya talk, good will. Is no such thing… I hate-a Christmas.” He is a bitter and weary soul. Life to him is alienating; it all comes down to money, not love, and people are selfish until they are forced to masquerade all this seasonally sanctioned “good will.” His worldview receives its first knock along with the first blow-in of the evening in the form of an unnamed hitchhiker (Donald Wood), or tumbleweed angel Gabriel, who disagrees with Nicky, saying that there is good and bad in people, and the former is worth far more than the latter. While Nicky seems to have the greater empirical evidence, dealing with a procession of rude and demanding guests, he takes for granted a shining example of the flipside, his enormously generous and fair-minded wife Rosa (Rosina Galli).

It all comes to a head with the sudden arrival of a young Mexican couple (Lynn Baggett & Anthony Caruso). They are in desperate need of bed and board because the woman is pregnant, and sure enough, she goes into labor. Siegel directs this sequence with inventive parsimony. He keeps the birth off-screen, and the action contained within the lobby, as, one by one, everyone rallies to assist with the birth — a fast-flowing communitarian drive that he stages with the structure and mania of a slamming doors slapstick comedy. Nicky is the last to succumb, and the most significant change of heart. Siegel has restrained space not only out of budgetary or runtime concerns, but because the film’s kernel is not a birth, but a rebirth. An immigrant who was once hard and pessimistic because he strives in a society where he is constantly put down, now stands, stunned into silence, because in watching everyone pitch in, he has caught a glimpse of an alternative world where it is all for one and one for all.

Siegel would often reflect on how instrumental this sweet, unassuming film was in establishing his directorial career, as if he were playing the part of Nicky in reverse. In his autobiography A Siegel Life, he describes his entry job in the industry, a film librarian, as a lost loafer’s paradise, easy and responsibility free, to the point that he and his supervisor could just drink and dick around on the clock. His eventual ‘promotion’ to full director, with this short and then another, Hitler Lives (1946), a documentary on the post-war persistence of fascism, was the beginning of the end of those halcyon days. They landed him an academy award apiece, which led to his first assignment as feature film director, which led to a lifetime of long, grueling shooting days and having to contend and compromise with the wasp’s nest of studio and star politics.

Regardless of whether Siegel truly felt his debut was the start of a fall from grace, or it was just a bit, fitting with his sardonic persona — likely there is bit of truth in both — the film is a humble and heartening retelling of the nativity as a people’s utopia Americana.