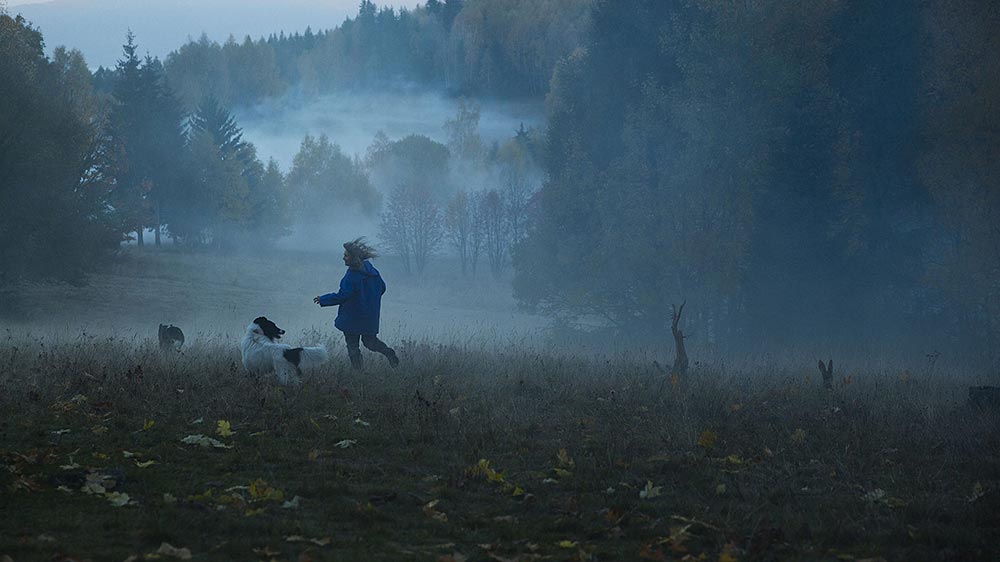 Part eco-feminist fable, part murder mystery, Spoor (2017) presents a poetic and political revenge tale. It plunges us into the fantastical landscape of southwestern Poland, into a village where modern life exists side-by-side with the fairytale-like primeval forest of Kłodzko Valley. The ancient forest is the proverbial damsel in distress, helpless against a group of men, who — deputized by Poland’s right-wing government to exploit its resources — poach animals and cut down trees. Working from Olga Tokarczuk’s novel Drive Your Plow Over the Bones of the Dead, filmmakers Agnieszka Holland and Katarzyna Adamik (Holland’s daughter) leave us with a conundrum as the destroyers of land and fauna get their just desserts: do we actually want their killer to be caught?

Agnieszka Mandat plays Janina, a teacher living in the village. She castigates the poachers, earning a reputation among the villagers — who are economically dependent on hunting — of being a meddlesome kook. (A recurring image is a close-up of the mouth of a sheriff or local priest telling Janina why her interspecies altruism is foolish.) One day Janina’s two dogs go missing and she suspects her neighbor of kidnapping them, but when she later discovers his dead body, surrounded by deer footprints, a bigger mystery begins to unfold. Suddenly, other hunters turn up dead, again with animal tracks circling them, which Janina interprets as nature seeking its revenge. She communicates her theories to the police, even providing some potential astrological explanations, but these only land her at the top of their list of suspects.

Cinematographers Jolanta Dylewska and Rafal Paradowski mix sweeping views of the majestic forest with intimate moments of communion with the animals that dwell in it. The camera embeds the viewer among them, often dropping down to lend us the perspective of a deer or a fox and to force us to spend time with their dead or dying bodies. The reality of hunting is granted all its tawdry particularity and never treated as an abstract concept.

The film is divided into four seasonal acts, each with a title card identifying which animals are legally allowed to be hunted. Janina comments on the absurdity of having permission to kill one day but not the next, solely based on the calendar. It is clear to her — and, hopefully, to us — that this arbitrary societal ritualization of death is both an unforgivable outrage and a means by which men (and in Spoor it is all men) institutionalize their domination over the world around them. It’s enough to make one retreat to the dark unknown woods for good.

Spoor is streaming on the Criterion Channel and Kanopy.