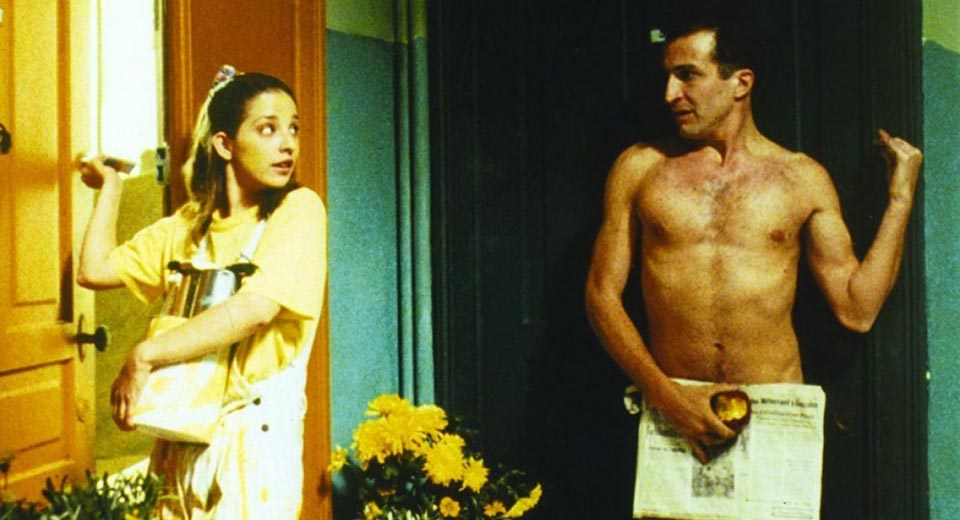 Airplanes, a key aural and visual presence in Mexico City, provide an important lens through which to view the differences between Alfonso Cuarón's most recent awards contender, Roma, and his entertaining feature debut, Sólo con Tu Pareja. Whereas in the former they are ominous, impenetrable images of a world the protagonist will never understand, in the latter they are a fancy phallic symbol full of sexiness, playful freedom, and all the cinematic cleverness that define the director's internationally recognized style. A screwball takedown of machismo with plenty of Lubitschian touches, Cuarón's first feature feels perfectly in line with the chauvinistic jerk-off competitions that the director would make his name off of in Y Tu Mamá También.

The film follows three days in the life of Tomás (Daniel Giménez Cacho, the lead in Zama), an egotistical womanizer, while he ruins weddings, crawls across the window ledge of his four story apartment building as he moves between lovers. When he spies Clarisa through her bedroom window while dangling from said ledge, he starts to learn the error of his sexually adventurous ways as all good movie bachelors should. Unfortunately his new moral clarity gets thrown through a loop when a sore-hearted nurse plays a prank with his HIV test results.

Working with cinematographer Emmanuel Lubezki — who has gone on to shoot almost all Cuarón's subsequent films and break Oscar records — the film breezily mixes playful visual gags with a vibrant color palette that can best be described as Almodovar-lite. The film culminates in an extended screwball chase across Mexico City that manages to involve boisterous Japanese businessmen, a gaggle of international dentists, and a malicious child. The fact Cuarón still finds time in all this turmoil to slow down and admire some of the landmarks that populate the city center proves that you don't need 70mm black and white along with a Netflix deal to make a compelling portrait of Mexican society.