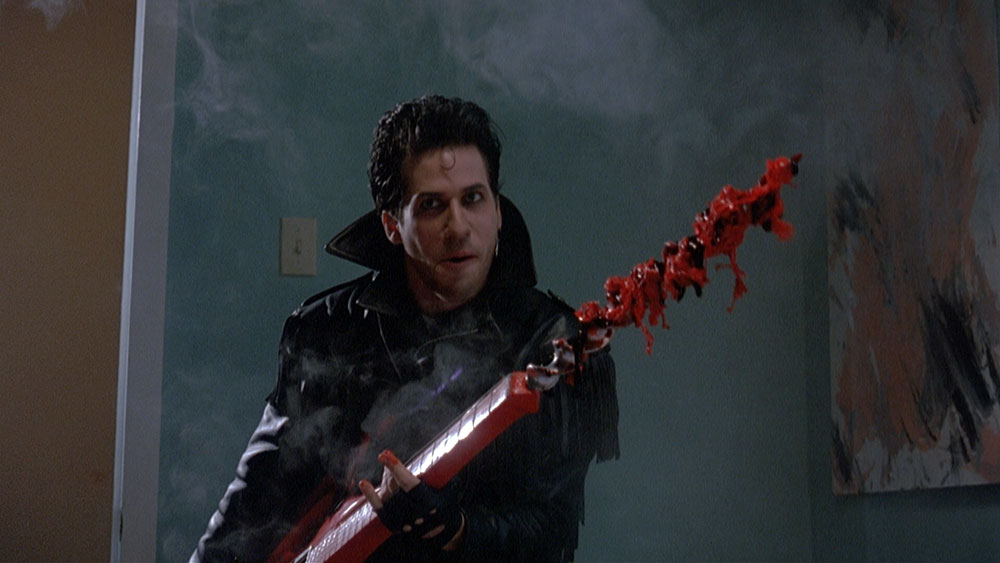 When we meet Courtney Bates in Slumber Party Massacre (1982), she’s a bratty pre-teen examining an issue of Playgirl magazine. Valerie, her older sister, is babysitting her while, across the street, Valerie’s classmates are having a slumber party. After a psycho, drill-wielding killer tears through the party, it’s Valerie who stops him in the end, knifing him while Courtney watches.

When we reunite with Courtney, now a teenager, in Slumber Party Massacre II (1987), she’s still into scantily-clad dudes. She dreams pleasantly about her crush Matt, shirtless and catching a football. But her dream turns into a nightmare, full of images of violence, dark omens, and Valerie writhing in the mental hospital where she is now confined.

Despite Courtney’s efforts to live a normal teen life—practicing with her all-girl band after school, singing along to pop music in the car, and making plans to see Matt—her thoughts are constantly choked by traumatic memories and hallucinations. After she convinces her mother to let her go to her bandmate Sheila's condo in the desert for her birthday, Valerie appears to her from her hospital bed. “Don’t go,” Valerie pleads with her sister. “Don’t go all the way.”

Courtney does go—to the desert for a slumber party of her own and all the way with Matt while she’s there. But her getaway only plunges her further into psychological distress. She envisions a deranged psychobilly killer, brandishing a guitar with a giant drill bit on its headstock. Suddenly the killer becomes physically real (or does he?), hunting and murdering her friends, shredding his guitar, and quipping Freddy Krueger–esque one-liners.

It’s difficult to tell who exactly this greaser driller-killer is, where he comes from, and what laws of horror apply to him. By the film’s last act, when he is relentlessly pursuing Courtney throughout the condo complex, the film has completely departed from any semblance of the rigid, rule-based forms supernatural horror typically takes (dream vs. waking life, the ghostly vs. the substantive).

One way to read SPMII’s gleeful disregard for horror’s patriarchal epistemologies—the binary between fantasy and reality and the strictures that govern where these two might intersect—is as a post-structural, feminist “fuck you” to the tyranny of “logic” that often regulates a largely male-dominated genre.

The Slumber Party Massacre series as a whole hatches from this parentage: SPM was directed by Amy Holden Jones from a script penned by feminist writer Rita Mae Brown. It was intended as a spoof of misogynist slashers, but ended up as a more traditional entry in the genre. Though SPMII—written and directed by Deborah Brock—isn’t quite a spoof either, it’s the film in the all-women-directed series that goes all the way into a sort of feminist horror-anarchy.