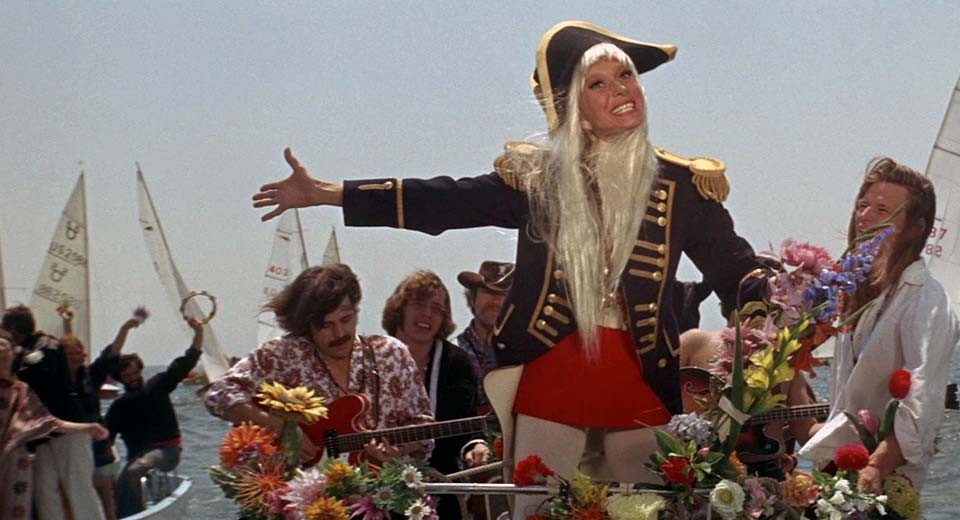 Skidoo is the film in which Otto Preminger’s camera guides a sweaty, prison-striped Jackie Gleason through his first acid trip, Groucho Marx plays a gangster named “God,” and Frankie Avalon’s remote-controlled apartment is on the fritz. It’s a psychedelic farce with teeth, a loony masterpiece. And Harry Nilsson’s on the soundtrack. And there’s naked football. And multiple musical numbers. This list is not exhaustive.

Gleason is Tony Banks, a reformed mobster called out of retirement to “kiss” his former best friend, who’s turned state’s evidence against the outfit. He’s lately annoyed by doubts concerning the paternity of his daughter, who’s fallen in with a band of hippies. (They are dragged before a San Francisco judge with twin portraits of George Washington and Ronald Reagan behind her.) The scheme for the hit gets weird after his draft-dodging cellmate inadvertently turns Gleason on with a tainted envelope. The trip saps his commitment to the job and sends the plot hurtling toward several playful, gonzo setpieces involving mass dosing.

It’s not all sunshine and good times, as too many skeezy jokes target sexually assertive women while exonerating lecherous men. But in general Skidoo’s moral compass points north. As much as it satirizes the vapidity of hippie excess, it’s an artifact of the counterculture, or at least an affectionate ode. Preminger and his film smirk at the the fringed vests and body paint, but can’t deny the ugliness of the alternatives. The dropouts have more fun, better ideas and sex, and don’t spend their evenings arguing over what to watch on TV.