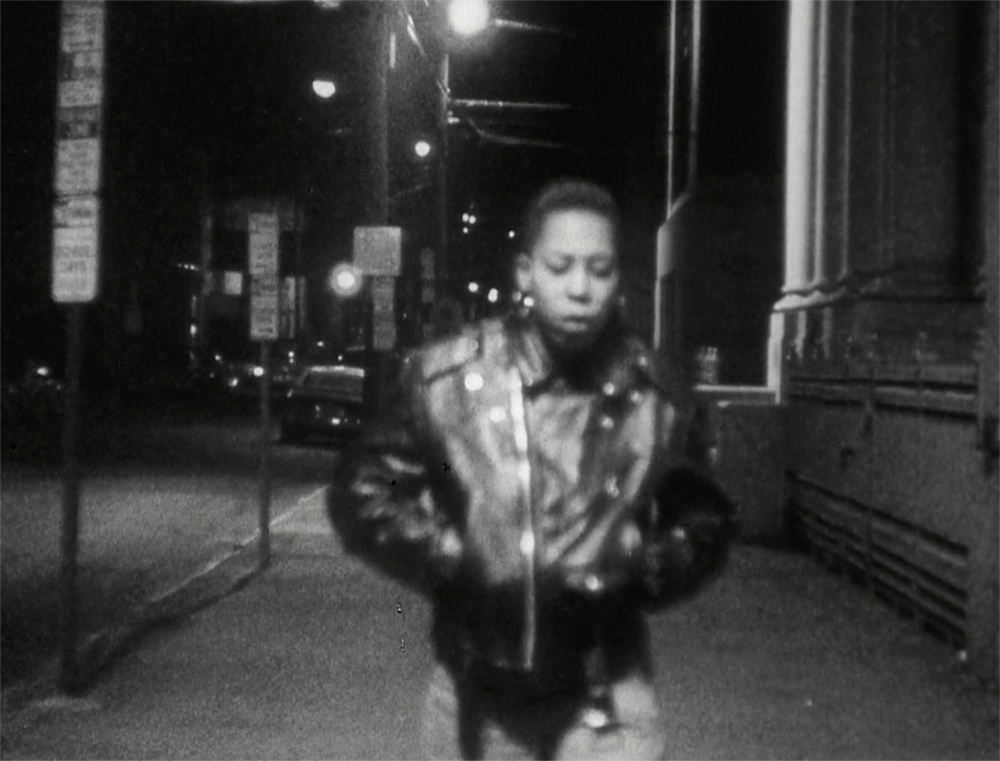 Risks and the Senses: Black Women in Experimental Shorts is a program of experimental shorts by Black women that draw out film and video’s ability to generate affect, the labor our body does to make sense of itself through the senses and emotions. This shift toward the senses parallels the emotive tensions of the films and thus asks audiences to consider how we can shift our way of knowing to one of feeling, to bear witness to more ambiguous forms of embodiment centering Black women. This ambiguity makes room for filmmakers and audiences to accept filmic experiences that themselves tread in grief, heartache, pain, trauma, and discomfort without situating that experience as evidence of the totality of lived experience — especially the lived experience of all Black women.

Probably the least circulated and most under-examined films in the program are Chasing the Moon (Dawn Suggs, 1991, pictured above), Demarcations (Kym Ragusa, 1992), and De*fat*ting (Michelle Lewis, 2000). Demarcations is a five-minute color and B&W video in which the director uses the medium’s form to draw out the intensity of gazing at another body while she confronts a memory of sexual assault. The video — like Chasing the Moon and De*fat*ting — was created during a Third World Newsreel Production Workshop in New York City. (Dawn Suggs is listed as a camera woman.) Ragusa jumps between visual styles; in one instance we see stark white-on-black declarative statements addressed to her perpetrator, in another we see an out-of-focus image of a nude Ragusa lying on a bed staring back at the camera, black-and-white scrambled images of a couple tossing about (presumed to be a disjointed image of the rape, but the images are purposely vague), and Ragusa’s stream of conscious thoughts via voiceover. Demarcations’ disjointed use of sound and image reveals how the two elements are not naturally in a synchronous relationship but exist as distinct forces welded together.

In her voiceover, Ragusa confronts and interrogates internalized and externalized racist thoughts on Black women’s sexualized bodies. She states that her attacker was attracted to her “brownness” and that she wanted to be seen in his “blue, explorer” eyes. The attraction toward Ragusa’s body is racialized from the onset of their encounter and it defines a clear power difference between the two. Ragusa’s frank examination of her desire to be seen by the dominant gaze, in both the voiceover and the formal aesthetic of the camera acting as an eye on her body, reveals the difficulty of decolonizing herself and the audience. In this way, Demarcations uses intimate relations to formally engage with the larger social and institutional structures of colonial vision, thought, and production.

The intersections of race and gender within the gaze are unpacked in Michelle Lewis’s De*fat*ting (2000). The thirteen-minute color video takes advantage of the increasingly nimble Mini DV cameras that defined video production in the late 1990s and early 2000s, following Lewis’s protagonist (played by Kerri Barbour) everywhere: in her apartment, in her bed post-coitus, on the toilet, at work, commuting to work. The boundaries between camera and character become even more unstable whenever food emerges; Lewis investigates the protagonist’s relationship with diet culture, white women’s microagressions toward Black women, sex, disordered eating, and work culture across a series of dialogue-less vignettes that swoop in and out of one another with manic intensity to match the tempo of Lewis’s voiceover. The mood of the film effectively conveys how — echoing bell hooks’s argument in her seminal “The Oppositional Gaze: Black Female Spectators” — white women have historically weaponized their visibility against Black women, hammering the point home with a montage of white women on the covers of fashion magazines. But rather than read this for its representational value alone, De*fat*ting uses its formal aesthetics to express and release the protagonist’s frustration about — and the ambiguity around — her weight and others’ response to it.

Dawn Suggs’ Chasing the Moon (1991) uses similar stylistic devices to follow a Black queer woman (played by Verona Anderson) taking a brief excursion into the city while reeling from a traumatic memory of domestic assault. Shockingly brief at four minutes, the 16mm B&W film features little dialogue but is set to house music that builds in intensity to match the flashbacks that disrupt the protagonist’s evening stroll. By having her walk alone at night to escape the memory of domestic terror, the film creates a commentary on the homophobic antiblackness that threatens her visible queer body at night. The audience is “on the run” with her; the home is too confining for its traumatic memories, and the city, while no less “safe,” provides room for the camera, the character, and the audience to breathe.

Aesthetically, the film uses the treachery of memory to disrupt the flow of time. Whenever the frame begins to settle into calmness, fragmented images of a bottle, a fist, a face in tears, a scream, and a blood-curdling “No, please don’t!” emerge to pull the protagonist right out of that peace. The low hum of house music (made by Claude Jones) then becomes a steady drone that helps deter the protagonist’s thoughts. The score also grounds the film in cultural history, as, in the 1990s, house music was dominated by Black and Brown queer cultural producers.

These three short films materialize a variety of intimate encounters with Black womanhood and their associated risks with being in a patriarchal white supremacist society. They contribute to a rich affective — as opposed to representational — archive of Black women’s experimental film- and video-making practices that, by liberating our sense-making abilities, bends its political work toward more ambiguous and non-singular ways of being and living in the world.