A Return to Salem's Lot 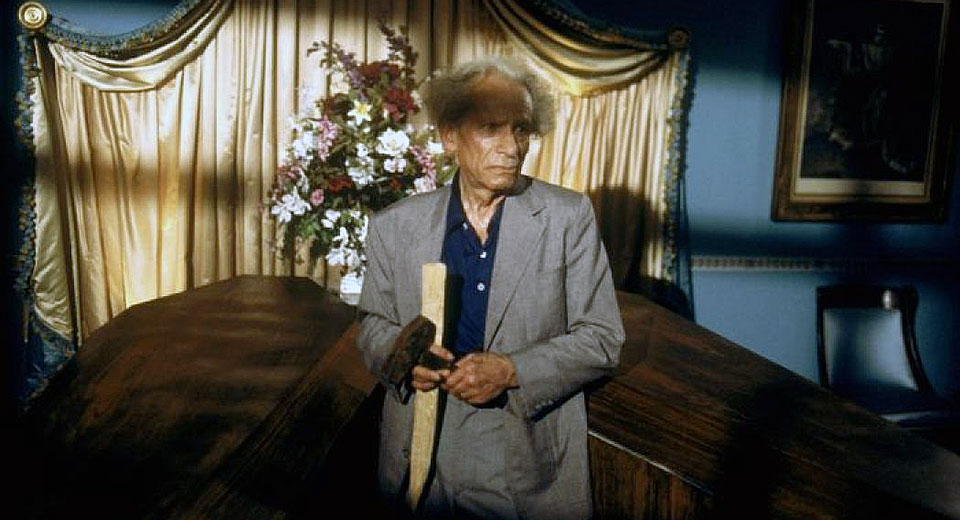 Ragged even by Larry Cohen’s own ramshackle standards, A Return to Salem’s Lot nonetheless ranks among the recently departed auteur’s best work. His thumbprint can be found all over every haphazard cut, mixed metaphor and surprisingly affecting performance. Every Cohen film sports a Big Concept and flawed, curious characters, and Return doesn’t disappoint. What might an anthropologist glean from a society of vampires impersonating a quaint New England village?

Michael Moriarty, the De Niro/DiCaprio to Cohen’s Scorsese, stars as an anthropologist pulled away from videotaping an Amazonian human sacrifice to assume custody of his delinquent son, who’s taken up smoking, joyriding and saying “fuck” a lot. The estranged pair retreat to a cabin in Jerusalem’s Lot, Maine, a decrepit piece of property left to Moriarty by his aunt. As father and son struggle to eke out an understanding, the town reveals its horrific secrets. The sparse population of daytime inhabitants, it turns out, are slaves bred by a cabal of vampires to maintain infrastructure while the lords of ‘Salem’s Lot sleep in their coffins until nightfall. These haughty undead “prefer the old ways” of New England formality, minus the Pilgrim’s puritanism, naturally. They feed on humans only periodically, subsisting instead on cow’s blood. They’ve conspired to draw Moriarty to town so that he can become official chronicler of the group’s four-century history. They admire his “credibility” and scholarly impartiality, qualities confirmed after he witnesses a group feeding and watches in bewitched horror instead of fleeing. He makes an honest go of his assignment, the deal sweetened by a reunion with his high school sweetheart, who hasn’t aged a day since he last saw her. But that’s just the tip of the psychosexual iceberg, which also boasts child marriages and septuagenarians lustily licking blood from their fingers.

Most gloriously, in a role that doubles as mythic autobiography, the heart and soul of American cinema, Samuel Fuller, brings every ounce of his own anti-fascist mania to the role of a Nazi hunter sniffing out the trail of an SS officer hiding out among the genteel New England vampires. He clamps a cigar, handles a Luger and neglects his wild mane while acting for all the world like a Samuel Fuller character: full to the brim with righteous fortitude and vinegar. As directors, Cohen and Fuller shared the ability to mine pathos from characters and situations pitched at 11. It’s a match made in low-budget, arthouse-genre heaven.