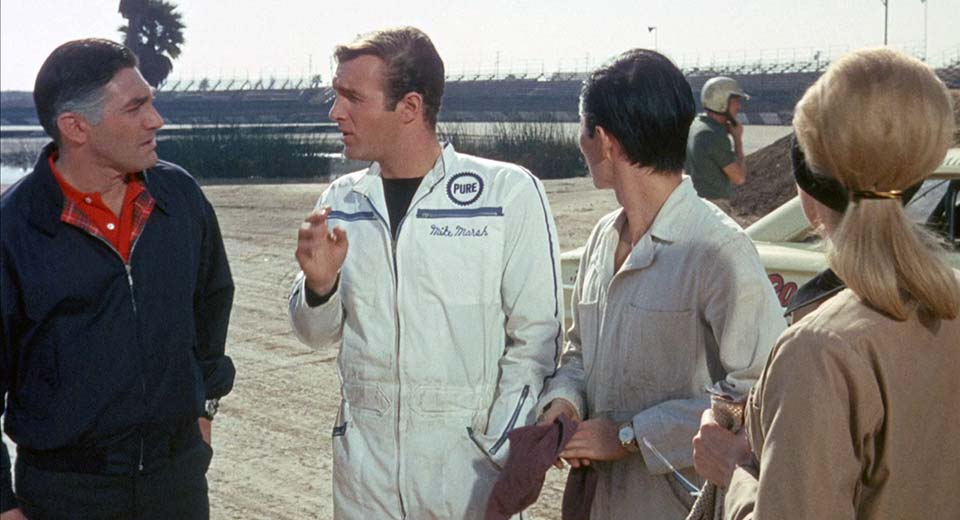 “For me, the best drama is the one that deals with a man in danger,” Howard Hawks said, and he followed his own dictum. The Dawn Patrol (1930), Only Angels Have Wings (1939), and Air Force (1943) are about aviators, while Scarface (1932), To Have and Have Not (1944), and Rio Bravo (1959) pit their heroes against adversaries on the other side of the law. What some call a late masterpiece (Robin Wood) and others a failure (Donald C. Willis), Red Line 7000 (1965), is undeniably a Hawks movie: a group of men (NASCAR drivers) facing death with stoic matter-of-factness.

Robin Wood compared Red Line 7000 to the late works of other classical Hollywood auteurs (John Ford, Hitchcock) claiming that they share "a loss of authority and confidence, an uncertainty as to the tone they wish to adopt.” Sure enough, the tone shifts from grim resolve to sexy banter, depending on whether there are women on screen. Peter Bogdanovich wrote, “Neither socially conscious nor self-consciously artistic, [Hawks’s] movies are, on the surface, witty, civilized, understated, and masculine.” Wood calls Ned’s attitude “instant-sex-antagonism,” which describes most of the relationships between men and women in Hawks.

Being about a corporate-sponsored sport, Red Line 7000 inevitably features heavy product placement (Rolex, Holiday Inn, Pepsi), but since their branding is not contemporary, there’s a historical charm to it, like looking at Joseph Cornell’s old Hershey bar wrappers.