Profit Motive and the Whispering Wind 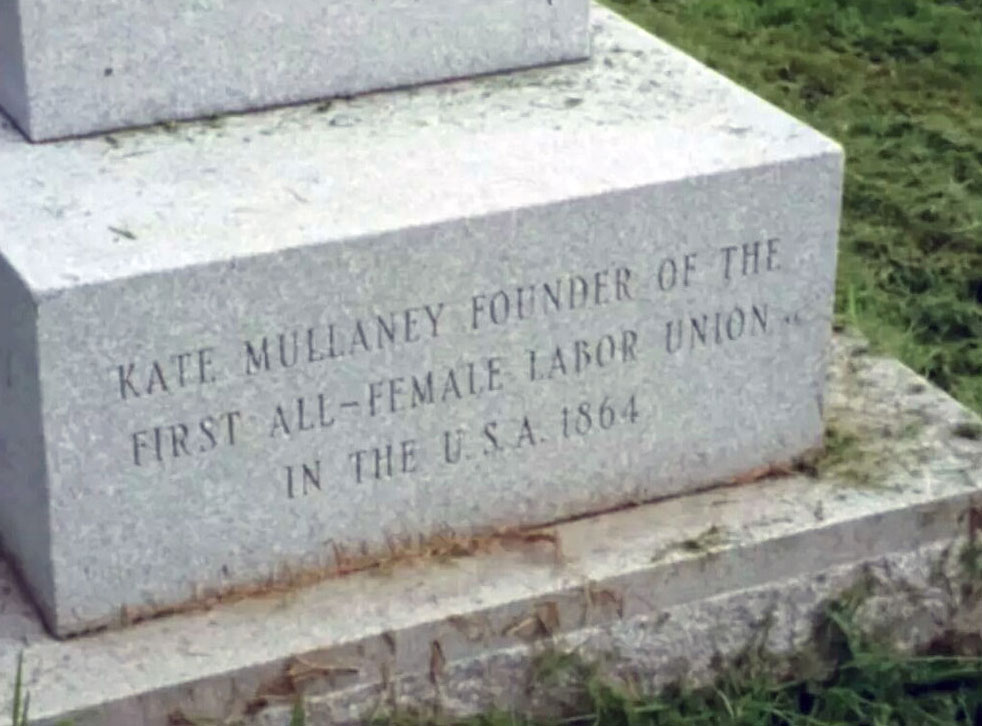 Dense, deciduous branches fill the frame, rustling lightly. Headstones emerge at odd angles from the underbrush. The camera interests itself at first in their lichens and erosion. Profit Motive and the Whispering Wind is John Gianvito's homage to the heterodox historical actors roughly composing the American left for the past four hundred years. The hour-long film, “inspired by and dedicated to” Howard Zinn’s A People’s History of the United States, visits the graves and markers of rebels and revolutionaries, uprisings, and massacres.

That last word appears early and often, describing variously the mass murder of Native Americans, Black fugitive militias, striking workers, and demonstrators. In one of Gianvito's few editorial interventions, on a sign glossing the 1675 Great Swamp Fight between colonists and the Narragansett people, the word "defeated" is amended with paper and marker to read "massacred" instead.

Some sites are neatly manicured and others overgrown. Pear trees have been planted in Milwaukee to honor workers killed fighting for the eight-hour day. Elsewhere, the burial place of Uriah Smith Stephens, co-founder of the Knights of Labor, is entirely unmarked save for Gianvito's on-screen text. The visitors, as well as the caretakers, have left their impressions. Flowers lay across Thoreau's grave. Emma Goldman’s has been graffitoed with an anarchy symbol. Daniel Shays's road sign has been used for target practice.

Other sites, neither decorated nor desecrated, have simply faded into the scene of contemporary American life. In Plymouth, MA, where Metacomet's impaled head was once displayed, a Girl Scouts recruitment yard sign has been planted. A traffic circle now courses around the site of the Boston Massacre. An Exxon gas station has installed itself beyond the Stono Rebellion plaque.

The murmur of car traffic runs alongside nearly every marker, broken periodically by the eponymous wind and the birdsong of Gianvito’s nature walks, reprieves from the rush of history. Brief moments of black-and-white animation provide some occasional bodily gestures in a film otherwise nearly devoid of them; hands pan for gold and gesture wildly on the floor of a stock exchange.

Profit Motive might be uncharitably read as a funeral march for the Left in this country, a proud litany of its deaths and defeats. Gianvito insists on the emancipatory power of memory. In the final sequence, demonstrators pour into the streets, carrying photographs of and faux coffins for the victims of US imperialism in Iraq and Afghanistan. A drum line is assembled, in the edit, from across myriad marches. It is only after we honor our dead, the film seems to say, that we can continue their work.

This is a landscape film, a structural film, a reading film, a film poem, a polemic. It is a reenactment of sorts, the battlegrounds and tombstones of American resistance visited in roughly chronological order. The project is like a history teacher's idea of a vacation. Much of the photography finds Gianvito in a cemetery in the early morning, before the mist has burned off. It is evidently late summer. The first leaves are falling from some of the tall trees.

Profit Motive and the Whispering Wind screens Friday & Sunday in Anthology Film Archives’s series “Bicentenario” and the Traces of History. It is also streaming on MUBI.