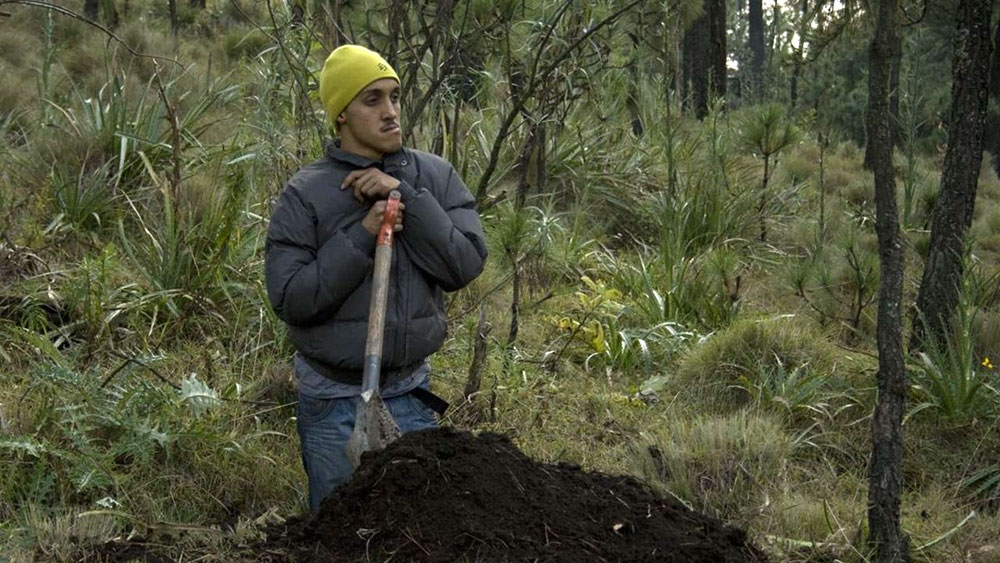 “Characters are not essential to the movies, people are. Acting is more than building a character, it’s offering the evidence of biography to the camera.” So writes the Mexican actor Lázaro Gabino Rodríguez in his book We are made for the dream, published in a new English translation by Spectacle Theater to accompany a six-film series of his work. Among the selections, Nicolás Pereda’s Perpetuum Mobile (2009) best illustrates Lázaro’s conviction that a character is not merely a facade an actor maintains, but a living chapter in their own biography.

Lázaro is a familiar face in Pereda’s films, as are Teresa Sánchez and Luisa Pardo (with the latter, Lázaro founded the avant-garde theater collective Lagartijas Tiradas al Sol). In Perpetuum Mobile they answer to their real names and play the same roles that they did in Pereda’s previous film, Together (2009). Sánchez is Gabino’s anxious mom, Pardo is his annoyed girlfriend, and they struggle to eke out an existence in Mexico City. But Perpetuum Mobile is not, strictly speaking, a sequel, nor is it a transposition of the actors’ lives onto the screen. These continuities have less to do with establishing realism or a narrative throughline than with the deliberate transfer of an actor’s embodied knowledge—their physical momentum—from one situation to another.

Gabino works as a mover with his business partner Paco, though their junker of a truck doesn’t attract many clients, and the jobs they get rarely go smoothly. When they’re instructed to remove the belongings of an evicted student from his apartment, the student shows up halfway through the process, begging them to store his stuff. They take the rest of the money in his wallet for the inconvenience. While they’re moving things out of the apartment of a quarreling elderly couple, they’re suddenly asked to bring everything back up: apparently, the threat of moving out was being used as a wedge in the argument. Gabino and Paco function less like movers and more like actors. Their temporary presence is called upon to deliver drama and a sense of urgency to the lives of others, revealing fault lines and vulnerabilities in relationships.

Through Lázaro’s evolving performance, these episodes of repetitive work become precise studies of human behavior. Gabino is introduced as an obstinate, deadbeat slacker, but in later scenes he seems like a genuinely hard worker, and at other times like a budding confidence man, eager to exploit social situations for his benefit. These changes don’t land as beats in a predetermined character arc, but as immediate and practical reactions to the specific people, places, and objects he encounters. When the film takes a morbid (and slightly fantastic) swerve, what occurs afterward is so tightly integrated into the film’s rhythms that we hardly question its logic. This is, for Lázaro, the mark of a job well done, of an actor responding not only to the script and direction but to everything that surrounds them. They begin to live, albeit briefly, in the world of their drama.

Perpetuum Mobile screens tonight, July 20, and on July 27, at Spectacle Theater as part of the series “Made for the Dream: Six Films Starring Lázaro Gabino Rodríguez.”