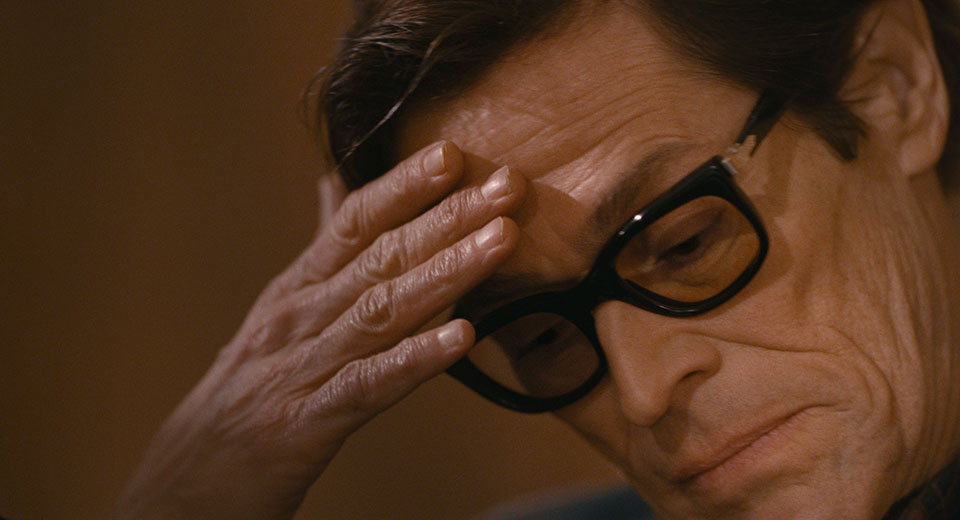 Abel Ferrara is the most empathic of filmmakers, and the unsavoriness of his protagonists often acts as a catalyst for that empathy. It also allows him to indulge his penchant for luridness. “We’re all victims and we’re all guilty,” Pier Paolo Pasolini (Willem Dafoe) says in Pasolini, Ferrara’s account of the filmmaker/journalist/poet/philosopher’s last days. “I’m an assassin and a good man.”

Early in the film, Pasolini is shown editing a scene from his final film, Salò, or the 120 Days of Sodom, about a gang of fascists who kidnap and brutally torture a group of teenagers. Pasolini, impeccably-dressed, well-connected and radiating authority, initially resembles the fascists more than their victims. This Pasolini is privileged and bourgeois, a great artist and public intellectual. It is through fragments of interviews, writings, and films that we come to know his radical Marxist politics. Although he associates with the working-class, and his manner seems compassionate if reserved, his relationship to them is fundamentally unequal, perhaps bordering on exploitative. They work for him, or are otherwise at his disposal; his housekeeper corrects his speeches for the Radical Party Congress and he has a not-so-secret habit of paying young boys for sex. Trattoria owners keep their doors open for him after-hours so that he can hold private meetings, either for work or more sordid business. He is treated with respect, even veneration, but we are left wondering whether people feel solidarity with him or are simply deferring to his power.

Pasolini is of-a-piece with Ferrara’s previous film, Welcome to New York, about Dominique Strauss-Kahn’s downfall. Both films, while technically biopics, restrict their timeframe to the days and weeks surrounding pivotal and turbulent events (DSK’s attempted rape of a maid, Pasolini’s murder). By limiting their scope, Ferrara both illuminates and obscures; by matter-of-factly chronicling mundane tasks and routine interactions, the films function as reportage, but by eschewing exposition, actions and motives remain abstract. Key events, disconnected from any broader context, are deprived of their capacity to serve as revelation or resolution.

Though Ferrara’s portrait of DSK is inflammatory and highly negative, Ferrara identifies with his plight as the de facto leader of a large organization who sabotages himself as a desperate means of expressing his autonomy, much as Ferrara, an uncompromising artist, must contend with the demands of commercially-minded producers and distributors. In contrast, Ferrara clearly admires Pasolini, and the similarities between them are more obvious, if somewhat superficial. Ferrara sets himself up for the ultimate empathetic act: to realize Pasolini’s unfinished work by filming fragments of his unrealized film Porno-Teo-Kolossal, with Pasolini regular Ninetto Davoli in the lead. Ferrara’s conspicuoususe of computer graphics, obviously unavailable during Pasolini’s time, suggests that he’s not attempting to make Pasolini’s film for him, but instead invoking his spirit, affirming Pasolini as a revolutionary and collaborating with him from beyond the grave, the ultimate act of empathy from one poet to another.