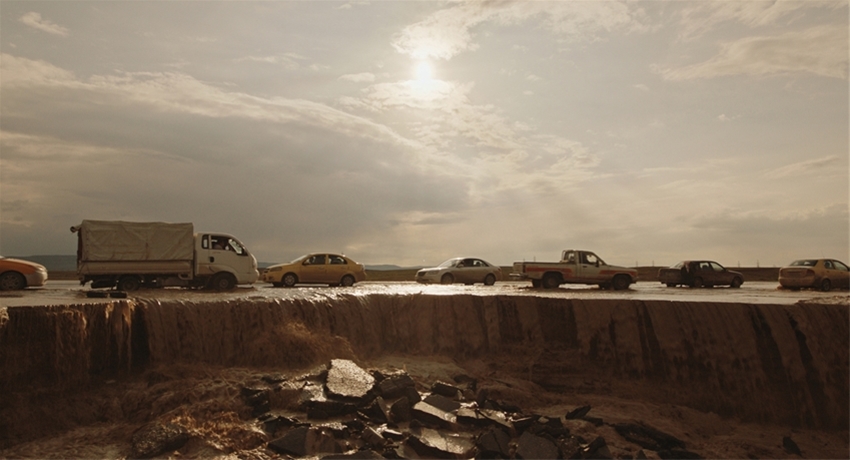 “How much pain, how much life, makes up the existence of people in the Middle East?” So opens the promotional synopsis for Gianfranco Rosi’s latest documentary Notturno, an impressionistic pastiche of lives at borders (geographic and otherwise) in Syria, Iraq, Kurdistan and Lebanon. The film itself, playing at NYFF, offers no such declarations. It feels strange comparing the quiet, painterly documentary to Italy’s lurid mondo genre — known for exploitative, often misleading footage focused on “foreign” sensationalism — especially given Rosi’s track record of observing, not imposing on, subjects’ lives. But in avoiding any explanations, Notturno’s scenes of violence once-removed start to feel like mondo pain tourism.

In a Film Comment interview Rosi compared his context-free approach to a Giacometti statue, “so thin, and up to you to create the space that’s missing. For me it’s a question of how thin I can go.” What’s seen is humanity struggling in spaces of quiet and routine, amid clear signs, immediate and past, of chaotic destruction. Cars and trucks honk as if typical city traffic had always skimmed across a vast, shallow sea, seeming to willfully ignore the sinkhole widening in the foreground. His hands-off approach can be calculated — as men in neon-orange jumpsuits file into a grey prison courtyard their sheer number stuns, making it more horrifying seeing them shuffle back into a single hellishly cramped, red-lit tomb. But if a chyron told you, as is the case, they were Islamic State terrorists, would your opinion of their inhumane conditions change?

Typical mondo narration is even provided by snippets of a political play performed by psychiatric ward patients (pure mondo gold, yet here not debasing), lamenting their unspecified state’s sorry state with lines like “The American invasion destroyed every beautiful thing!” The film proves otherwise; where mondo leers at the squalid, Notturo is truly gorgeous. In most scenes, humans are dwarfed by Caspar David Friedrich landscapes, soft-light pastels and blues giving way to fiery reds as a poacher (again, never specified in-film) quietly goes about with gunfire in the distance. A woman lit solely by phone light, listening to increasingly desperate messages from her ISIS-held daughter, could easily be a Caravaggio painting. Unanchored from painful on-screen emotions, all this beauty adds to the strange sense of trespassing.

Rosi’s empty-space philosophy is concretized as violence only unfolds in distanced mediums — ruins of a torture room, photos of a dead son, soldiers watching phone footage of trench battles during downtime. In the most affecting moments, children coloring evenly explain the blue dots and red lines in each drawing are tears and blood, showing ISIS forces attacking their villages. Their teacher reassures them they’re safe now, but scenes of soldiers on uneventful watches and city life skirting bombed-out rubble outline the probability of violence yet to come. By what Rosi doesn’t show (or tell), Notturno’s audiences mentally develop their own mondo negative.