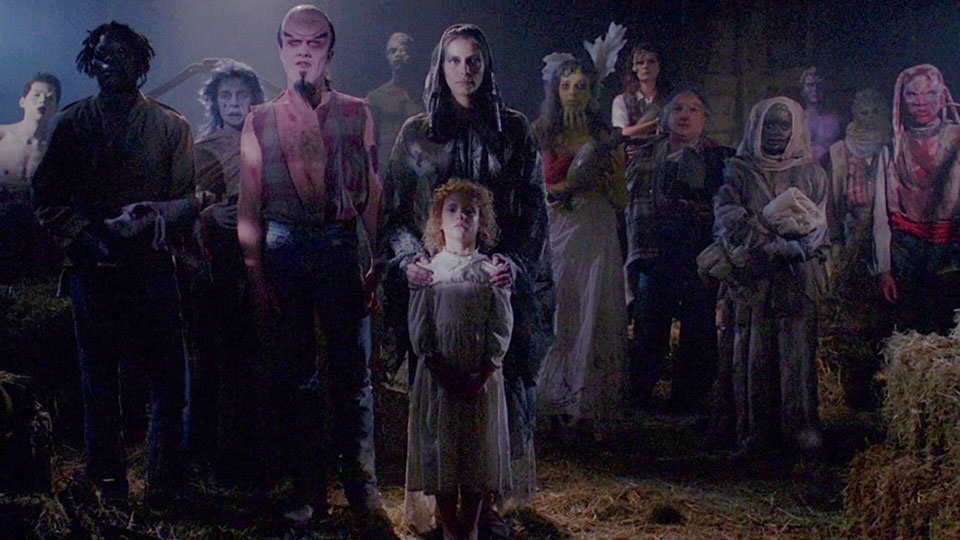 Clive Barker’s high-budget follow-up to his legendary Hellraiser, Nightbreed is a study in excess. Its two-hour runtime is a corkscrew of plot twists, introducing a wacky new character roughly every 20 minutes and killing them off almost as quickly. There’s lore for the sake of lore, exposition raising more questions than it answers (how’d all these monsters get to Canada, anyway?) — at one point the film was actually in the Guinness Book of World Records for having the most monsters on screen in a movie. With its messy, maximalist commitment, Nightbreed is strangely endearing. It is sprawling, florid, self-indulgent — and unapologetically gay. Despite or because of this, the film attained cult status. Originally released in 1990 to critical and commercial failure, Scream Factory’s 2014 release of Barker’s director’s cut reveals a film daring in its ambition, a study in the erotics of violence and repression on a mythical level.

All his life, Aaron Boone (Craig Sheffer) dreamed of a city of monsters called Midian. Boone’s dreams once troubled him, but he confides to girlfriend Lori (Anne Bobby) that he’s started to like them. At Lori’s insistence, Boone seeks the questionable care of psychologist Dr. Phillip K. Decker (David Cronenberg, clearly having a ball).

Midian is real, hidden in the catacombs below a forgotten rural cemetery. Boone is drawn there, but the monstrous inhabitants, known as the Nightbreed and living in secrecy after barely surviving genocide by humans aren’t very friendly. After Boone is bitten on the shoulder by one of them, he not only joins Midian, but becomes its savior after Decker discovers the monsters, alerts the local authorities, and leads the charge back to Midian for an all-out monster/cop battle.

With its hidden nooks and passages and abandoned, out-of-the-way nature, Midian evokes nothing so much as a cruising ground. Boone has chemistry with almost all the monsters, most notably Narcisse (Hugh Ross), a queeny flirt who makes suggestive jokes about sailors, and Peloquin (Oliver Parker), who talks like a leather daddy. When Peloquin bites Boone, the moment is far more erotically charged than any of the romantic scenes with Lori. Nightbreed’s winky subtext is especially provocative given that the film came out as the AIDS crisis neared its peak.

Nightbreed is Monsters in Canada, not Angels in America, but it does address the context in which it was made. It has a parallel in Charlie Lyne’s 2018 documentary Lasting Marks, which reflects on the legacy of the notorious UK police investigation Operation Spanner. Spanner was a massive, multi-year vice operation which ultimately rounded up a dozen gay men who met up for BDSM play. Although all the action was consensual, the state pressed charges anyway, forcing several men to plead guilty to aiding and abetting assault on themselves. Lyne lets Roland Jaggard, one of the men convicted, tell the story, illustrating his narration using only scans of court documents and contemporary tabloid coverage of the trial. The simple juxtaposition of these archival documents with the voice of an older man still struggling with the trauma inflicted on him is haunting, all the more so because Lyne doesn’t attempt to sanitize the lives of Jaggard and his friends. Jaggard had some kinky sex, and because he did it at a time when an ascendant religious right successfully leveraged AIDS stigma to fuel their political agenda, he served jail time for it. Operation Spanner’s trials began the same year as Nightbreed’s original release.

In a later scene, cops and the local militia gear up to exterminate Midian. It’s been established the monsters pose no threat to humans, to the point locals had no idea Midian even existed until now. All the same, they cheerfully load up their trucks, excited to go murder some freaks. Meanwhile in the police station, cops lovingly select weapons from their arsenal, excitement mounting until one straight-up licks a garrote. The gesture parodies the perversion that punished fake handcuffs with real ones in Operation Scanner and countless other forgotten raids. Nightbreed its most exhilarating when playfully troubling the distinction between violence as play, and violence as bureaucracy. Who exactly are you calling a pervert?

“Normal people are the real weirdos” has proven a very marketable message, as demonstrated by dozens of superhero movies, Tim Burton’s whole deal, etc, but Nightbreed differs by being too angry, too specific. Instead of vague lessons about tolerance or being yourself, Barker offers the image of a woman-monster punching a duckbill fist through a cop’s chest. Spoiler alert: Midian wins. Nightbreed metabolizes fear, grief, and persecution into a gleeful work of two-middle-fingers-up filmmaking — and still finds time to break the record for most monsters on screen at once.