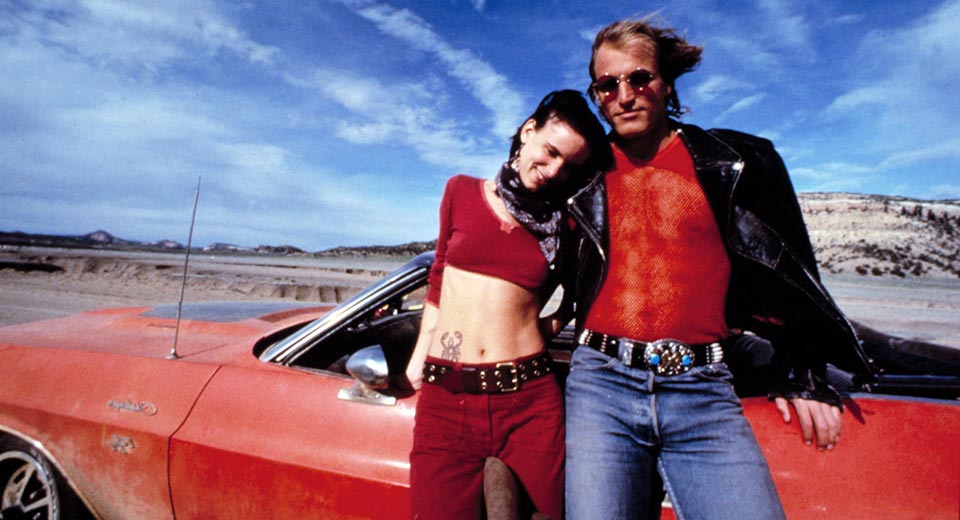 Had Oliver Stone and editor Hank Corwin excised Robert Downey Jr.’s maniacal Geraldo impersonation entirely, Natural Born Killers might play as a genuinely unsettling, phantasmagoric nightmare of exploitation violence and oddly affecting romance. In other words, a more coherent and effective film. But had they done that, we wouldn’t have Downey’s genius turn—his finest performance, full stop—as the archetypal outrage ogre, a prophecy realized again and again on cable news in the decades since and almost certain to continue long after Rupert Murdoch’s great-grandchildren put an oozing asshole in front of a Fox News desk in 2072. Watching Natural Born Killers today is to wish for less while reveling in just how much more is on offer.

Our national attachment to murderers is Stone’s primary satiric target, rankly hypocritical when you consider how much fun he’s having staging the most stylishly violent American film ever made. His self-righteousness is the bath water, but the film’s madcap amorality is the beautiful baby. As he leans too heavily on his condemnation of our unhealthy lust for blood-soaked breaking news, he overplays his hand and the film starts to hobble, until another smash cut of a glowing breast showered in a rain of blood shocks us back to our senses. Stone can’t bring himself to appreciate his own film as a joyride through a uniquely American darkness. But again, removing Downey's character—and thus the "satiric" heart of the film—would mean a world in which Robert Downey Jr. never screamed "I don't love you, I love me!" in an Australian accent onscreen.

Had he resisted the urge to shoehorn the so-90s “why are we sick?” grandstanding, he might have fashioned a troubling exploitation-throwback full of unanswerable questions concerning our love of screen violence and out-killed Bill a decade before its release. (Tarantino himself disowned the heavily-rewritten script for Natural Born Killers, chiding Stone that his "obviousness cancels out his energy." Still, only the most delusional sycophant would claim QT's spurt-fests rival the intensity of Stone and co.'s work here.) There is atavistic power in the beautification of violence and it needn’t entail our trivialization of the real thing. When it’s not tsk-tsking its own audience, Natural Born Killers permits us to bask in the rare decadence of dirty-cheap thrills on a large budget. Hypocrisy is such a small price to pay for the pleasure.