Ms. 35 offers helpful advice and answers to your etiquette questions related to NYC's moving image culture. Have a burning question about navigating the exciting world of New York City moviegoing? Unsure of how to conduct yourself during a communal experience? Feel like you're… in the dark? Send your inquiries to Ms35@screenslate.com!

Editor’s Note: this is Ms. 35’s first truly anonymous submission, manually typed on a sheet of A4 and sent via the (still functioning) United States Postal Service. To properly honor this analogue correspondence, we have scanned and are presenting the letter itself, in full. 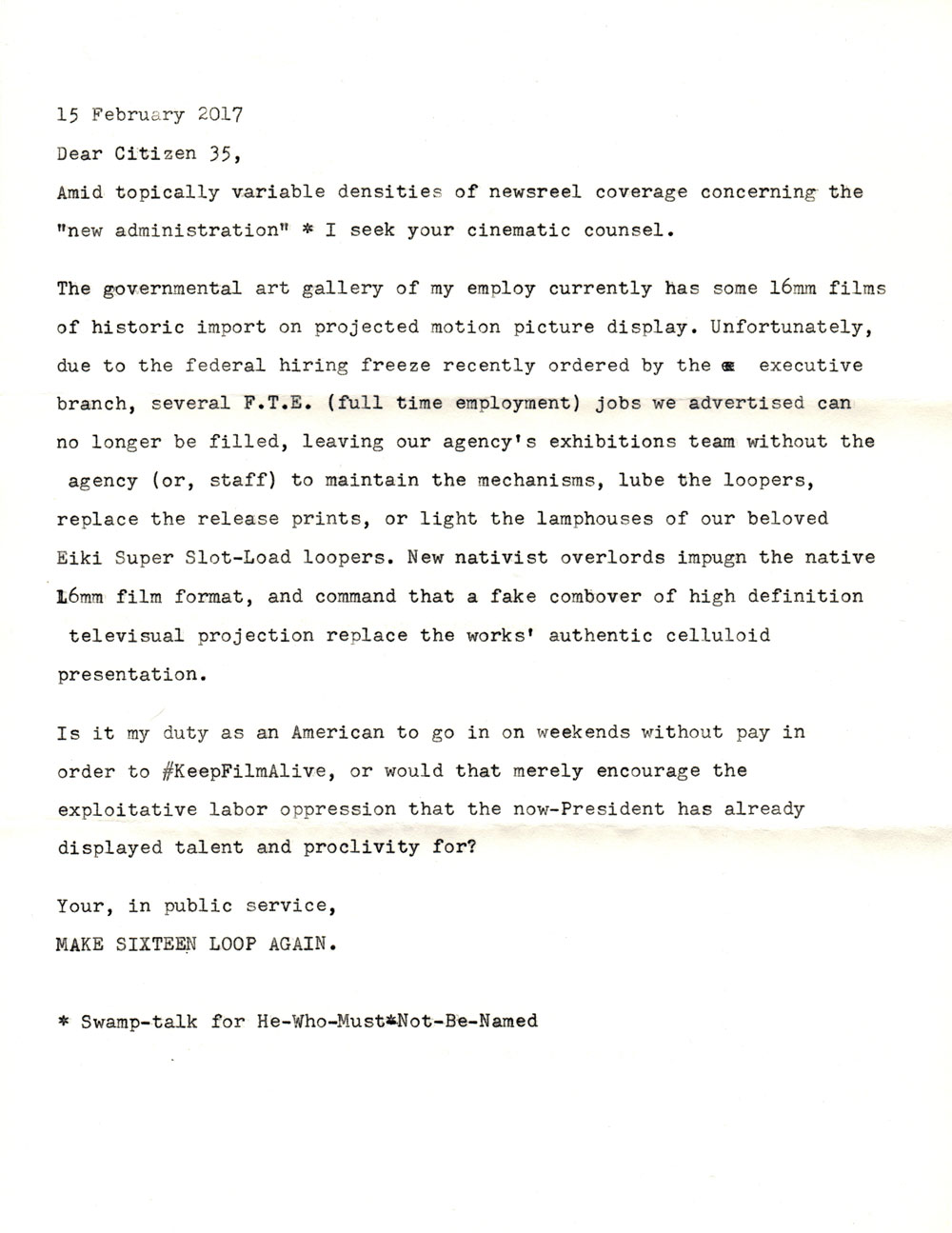 Ms. 35 is reporting to you from her fur-lined panic room, beneath a tinfoil chapeau of the chicest order. Although Screen Slate cannot divulge the exact location, we can confess that the surrounding beach club and octogenarian dating scene is unparalleled. Hidden from the ongoing tire fire that is our rapidly-declining, so-called “democracy,” she hopes this response finds you—wherever you may be. From one clandestine cinephile to another, we must remember that blood is thicker than water, and celluloid is thicker than blood.

In light of the President Reject’s slash-and-burn approach to federal budgeting (but not his golf trips—HIYO!), a rather harsh truth has come to the "fore." If Hollywood is the moving image equivalent of the Cheeto-in-Chief (banal, vulgar, surprisingly popular, bad for your blood pressure), 'murica’s federally-funded arts programs are the bastard stepchild—the Tiffany, if you will, ever on the periphery and shortchanged at Christmas.

With this mind, your question takes on an even greater weight: as a servant of this Fourth (shittier, less fashionable) Reich, your labor serves not only an imperialist master, but a fascist regime to boot. You may have been able to overlook your pawn status in the zero-sum-game that is Neoliberalism with some caveats about “respect for the medium,” “love of the game,” call it what you will. Now, this veil has been cruelly ripped, and every day at your desk is another day wasted in service of this experiment we once called “America.”

Fear not, Comrade 16. Though you may have woken up the morning of November 9 mistaking reality for a poorly-written horror movie, we cinephiles have an ace up our sleeves: those countless midnights spent memorizing “final girl” tropes are about bear fruit. Any moviegoer worth their weight in popcorn knows how this story ends. But this time, the call coming from inside the house is not some masked killer—it’s you, our hero.

History is sprinkled with brave tales of cloak-and-dagger resistors, doing the most damage from within the fortress. Claus von Stauffenberg, of the notorious, Tom Cruise-starring “Valkyrie” plot, was a German nobleman and army officer. Julius Caesar was murdered by his right-hand man while his colleagues stood idly by. If you can swallow the bitter pill of peonage, you possess within your reach a very real potential to Fuck Shit Up (however quietly).

It doesn’t take a MacArthur Genius to know that laboring in the arts, even in the best of circumstances, is thankless grunt work. The pennies cast in your general direction by the (overwhelmingly rich, white, male) welfare cheats running this country have dried up, like so many unoiled sprockets in an abandoned projection booth. Full-time arts jobs are at an all-time low, and many have speculated that creative pursuits will soon become the exclusive purview of the very wealthy and their spoiled spawn. Don’t lose heart: although the Chinese pictograph for “crisis” is not, in fact, the same as “opportunity,” there is a kernel of wisdom to be found within this etymological fallacy. Who better to work for free (or, “experience”) than those can afford to foot the bill?

Comrade 16, isn’t it time to start kicking that can down the sidewalk? The Man’s boot has pressed on your throat long enough. Look around you: half the jobs in Washington are slush-fund kickbacks created to occupy the idle hands of countless Daddy’s Girls and Mama’s Boys. In simpler times, before the advent of Liberal Arts degrees, we’d ship these wastrels to the nearest monastery or Merchant Marine ship. Today we distract a burgeoning brat class with a cradle mobile of endless hot takes, thinkpieces, and prime opportunities for indentured servi— pardon me, internships. “To each according to his abilities,” indeed.

A prison is defined by which side of the wall you’re on. The view from the Swamp may look cloudy at best, opaque at the worst. Until you can shake off the shackles of your own exploitation, there’s no harm in pulling a Tom Sawyer and tricking a rich kid into whitewashing the proverbial fence. Between screenings, guiltlessly try to devote your newfound free time to destroying these ratfuckers from within by a thousand tiny cuts. And take cold comfort in knowing a pampered Fontleroy is greasing the reels and cleaning out the office fridge while you’re chilling hard on a weekend, trying to drink through the next four years (inshallah).

P.S. On behalf of all of us toiling away in service of the Seventh Art, Screen Slate salutes you. When the dust settles and a new dawn arrives—bringing with it universal healthcare, legal weed, and a nationwide ban on DCP—Vice Premiere 35 might just make you Minister of Propaganda (and Vibes). ☮

Comments? Send your responses to Ms35@screenslate.com , and you might see your feedback printed letter-to-the-editrix style in the next edition.

Want to support Ms. 35 and the rest of the crew? Become a member with a small monthly contribution and get additional benefits.