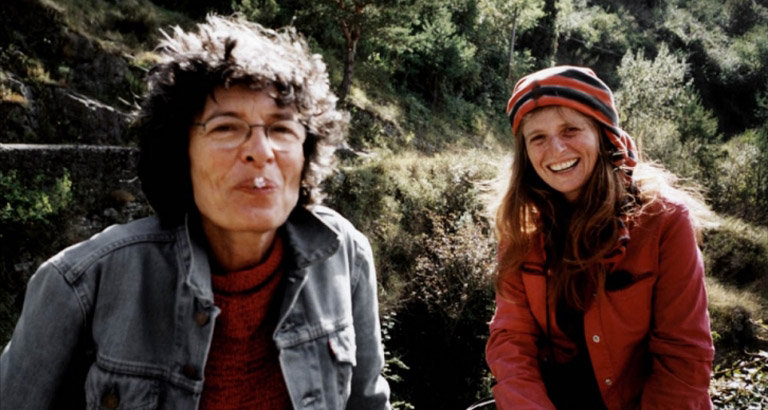 Mimi is a perambulatory documentary by Claire Simon that follows the director’s friend Mimi Chiola as she strolls through the streets, fields, and mountains of the South of France. The film begins in Nice, where Chiola - a middle-aged, tanned woman wearing a Hard Rock Cafe tee-shirt and wire-frame glasses, a denim jacket slung over her shoulder - grew up in the rubble of WWII. As she gazes at a painting at the film’s start, Mimi tells of her father killing a donkey out of fear and hunger while hiding from the Gestapo in the hills above the city. Under a shady tunnel, she speaks of her mother’s recollection of meeting an Italian stranger in the street, and of love at first sight. Near a tennis court, we hear a tale of teenage lust, and in a superlative sequence shot over a railway depot, she remembers watching her brother leaving on a train to Paris.

Wandering from Nice to Saorge, a rural village in the Alps, Chiola’s reminiscences are only sometimes tied to specific streets and structures. Most often they feel led by a dreamy intuition, giving the impression that a certain alchemical mixture of light, season, smell, and sound have conspired to reanimate Mimi’s memory. Mimi shows the ways that memories and places imprint on one another, and how the present tense can’t always manage the weight of the past. Much of the film, gorgeously shot in Mediterranean light on 35mm, doesn’t attempt to paper over the spots where the patch doesn’t always quite hold; sometimes the landscape rejects Mimi’s projections. In one scene, as she describes a hot, spontaneous, goodbye tryst with a lover in a hotel, a head poking out of the window looks suspiciously at the camera before quickly ducking out of the frame. And as Mimi perches in front of a church to tell the story of her coming out, a pair of passersby comically try to hide behind a row of motorbikes before finally giving up. Simon has no interest in framing them out.

Simon’s filmmaking adds its own layer of subjectivity: sometimes her camera follows her subject’s gaze in wide pans across the landscape, at others, it the camera seems to obey its own romantic, distracted impulses, slowly moving across the pebbles on a stone staircase before snapping back to Chiola’s face for the punctuation on a sentence or to take in a pregnant pause. We linger on her hands and watch her eyes thinking from every angle.

Many of Claire Simon’s other documentaries, particularly Recreations and The Competition, share a casual air to them, a simplicity and ordinariness that belies Simon’s deliberate elevation of tiny gestures. As a viewer, you feel more like you’re drifting than you are being lead, but you are most certainly being lead. Because Mimi is writ so small, it allows for viewing that can be minutely attuned — to the trees, to the slight changes in Chiola’s face as emotion washes through, to each note played by the guitar player the pair join for extended musical breaks.

Mimi brings to mind Virginia Woolf’s beautiful essay on walking, ‘Street Haunting.’ Woolf describes the moment when one leaves for a stroll, when the door finally shuts behind us: “The shell-like covering which our souls have excreted to house themselves...is broken, and there is left of all these wrinkles and roughness a central oyster of perceptiveness, an enormous eye."

Mimi is an expansive construction of Woolf’s “enormous eye,” and that eye is turned on what Simon describes in the press notes as not being “a star...just someone.” The film is an expansive act of observation, and when that sort of rapt attention is applied to a middle-aged lesbian talking about her life experiences — just a “someone” — it approaches a radical act.