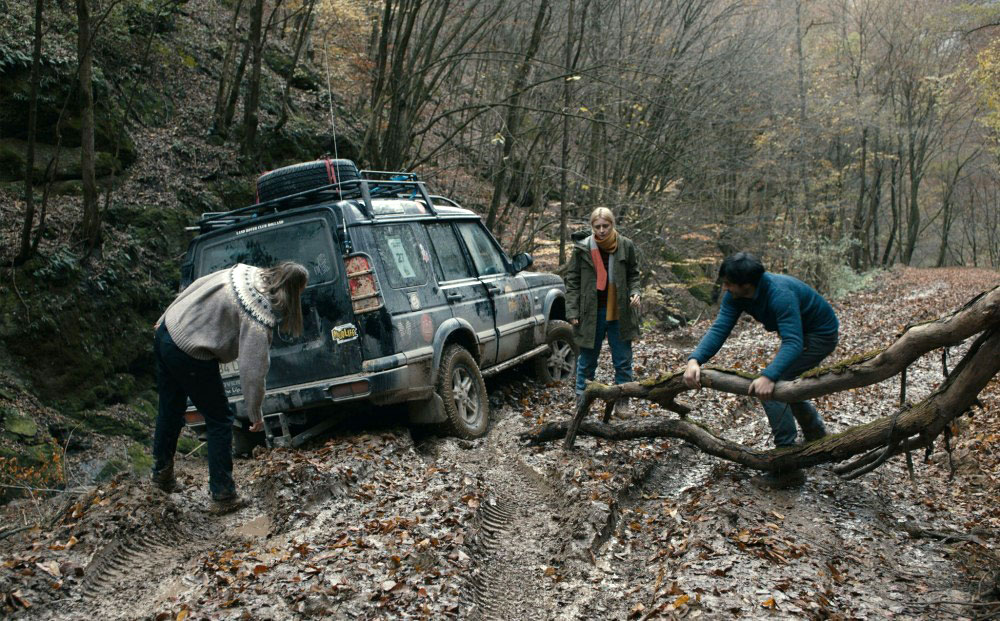 At a pivotal moment in Radu Muntean’s Întregalde (2021), a strange old man shits his pants in the back of a Land Rover. Maria (Maria Popistasu), Illinca (Ilona Brezoianu), and Dan (Alex Bogdan) meet the old man, Kente (Luca Sabin), while delivering aid packages to rural villagers in Întregalde, a remote community in Transylvania, Romania. The group of volunteers are part of an initiative organized by a local mayor—one in a fleet of large SUVs fitted with walkie talkies, phone chargers, and provisions. The trio encounters Kente walking alone on a sloping road, and though their walkie talkie is on the fritz and they’re due at an end-of-day barbeque in a couple hours, they decide to give him a ride. Through a series of misfortunes, they become stranded on the mountain road overnight. Though they have the basic means of survival—food, shelter, brief stints of phone service—they must deal with a level of precarity that is unsettling and, at times, scary.

Kente, who proves to be a (harmless) babbling fool, frequently wanders off. After the volunteers finally get him to remain in the car and eat something, he falls asleep, defecates, and eventually wanders off again. Later, they look on as a neighbor strips Kente naked and hoses down his soiled body in a barn. Incontinence and disappearance, they learn, are part of his routine. And his neighbor, while expressing both frustration with and acceptance of Kente’s “outdoor cat” level of pseudo-domestication, provides the care that the volunteers aren’t really able to give him.

In his book Life Against Death: The Psychoanalytical Meaning of History (1959), Norman O. Brown describes “the excremental vision” as a heroic, unflinching reckoning with human waste. He writes that Jonathan Swift, through his preoccupation with excrement in Gulliver’s Travels and elsewhere, lays bare “the ultimate horror .‌ . . the thought that sublimation—that is to say all civilized behavior—is a lie and cannot survive confrontation with the truth.” Beyond living through the night, the film’s volunteers have to contend with their exposure to waste, filth, and shit, essentially reexamining their own understanding of civilization.

The humanitarian effort of which Muntean’s protagonists are a part is designed to help a fringe culture continue to exist in the way it long has. These mountain communities represent metropolitan Romania’s past; they’re where folk tradition, craftsmanship, nature, and a sense of purity are supposed to flourish. What the volunteers find in the mountain passes of Întregalde isn’t an untainted community in need of their maintenance, but a society in many ways less naïve than their own.