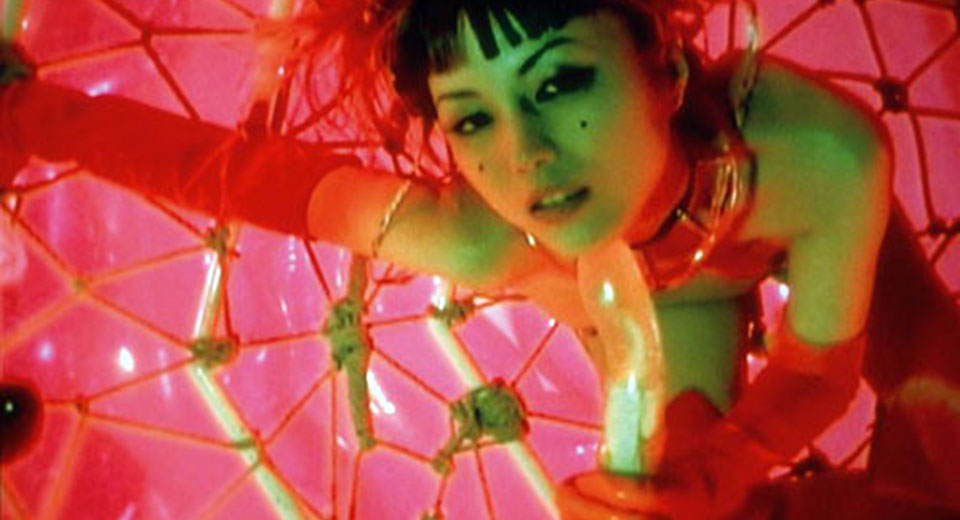 Shu Lea Cheang’s dizzying, PVC-and-LED-clad sci-fi fuckfest I.K.U. is the bastard lovechild of Ridley Scott’s Blade Runner and the wackier parts of McG’s oeuvre. Set in the not-too-distant future (2020, or thereabouts), the (admittedly light) story follows a shape-shifting sexbot named Reiko as she slithers through New Tokyo on a fornicating fact-finding mission. An emissary of the shadowy Genom Corporation, Reiko throws herself headlong into every conceivable position and erotic arrangement, gathering valuable orgasm data for an ongoing project to replace old-fashioned fluid transfer with a downloadable sexual experience. Lusty consumers can purchase an “I.K.U. chip” implant, which allows them to plug directly into a pleasuredome mainframe and do away with this messy business altogether. Reiko is programmed to mindlessly screw, and nothing more, until the success of Genom’s project threatens her with obsolescence. Chafing against her narrow mission, she oscillates wildly from instrument of pleasure to anarchic disruptor, reclaiming her autonomy one bone at a time.

The onscreen struggle for self-determination has its own analog in director Cheang’s much-publicized battle for creative control. While you’re watching, slack-jawed and wide-eyed, remember that this hard-won hardcore is a full-throated “fuck you” to Japanese censorship and producer Takashi Asai, who had something softer (and, surely, less interesting) in mind. Between the numerous nuts and nuttier premise, it would be easy to write off I.K.U. as little more than a late-night Y2K curio. But by borrowing heavily from Asimov’s “Laws of Robotics” and turn-of-the-[last]-century “city symphony” films, Cheang weaves a neon tapestry of orgies, “vintage” CGI, and probing questions about the nature of humanity, all set to a soundtrack of jackin’ techno grooves and keyed-up slurps and moans.