The Girl and the Spider (NYFF Review) 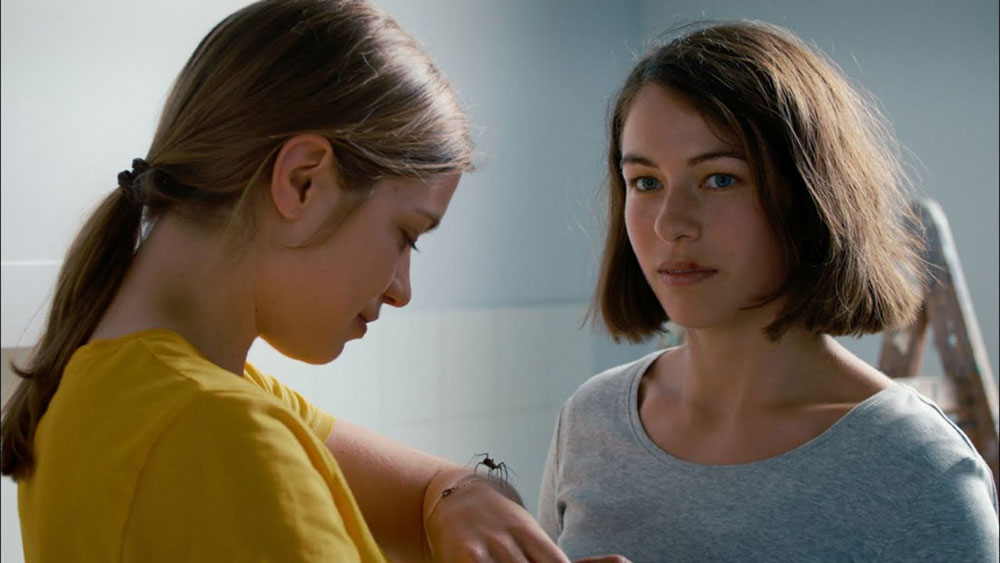 The second feature by Swiss twins Ramon and Silvan Zürcher begins as a story of two roommates: Lisa (Liliane Amuat) is moving out of the apartment she shares with Mara (Henriette Confurius) in Berlin. The film opens with a comfortingly symmetrical blueprint of their two-bedroom flat, but on Lisa’s moving day, the Zürchers stick to tight medium shots that make it impossible to parse the layout of the space. What happened between Lisa and Mara is also left unclear; there are flickers of past sexual tension, but, as is often the case between two people who live in close quarters for long, it’s tricky for outsiders to grasp the nuances of their disconnect.

The Girl and the Spider—the second installment of a thematic trilogy that began with the Zürchers’ debut, The Strange Little Cat (2013)—embraces the strangeness of these unspoken currents. Instead of traditional exposition, the Zürchers favor recurring images and rhythms: a dog repeatedly snatches a sponge off of the edge of Mara’s sink; each morning the day breaks with a loud, phallic jackhammer piercing the road. People speak to each other through enigmatic but fascinatingly detailed anecdotes. Many scenes accrue off-kilter visual details as though they are half-remembered dreams. The atmosphere is destabilizing, like teetering on the edge of a cliff, which speaks to Mara’s ambivalence about this upheaval with Lisa. Yet the film’s non-sequiturs are far from staid or humorless—in one of many stellar interludes, one character spies on two others having sex while standing in the doorway, topless and wearing a motorcycle helmet.

In an interview with MUBI’s Notebook, the Zürchers framed their approach to filmmaking as philosophical in that their main goal is to pose questions. This attitude lends The Girl and the Spider an ever-expanding sense of fluidity. As the film’s focus widens to include Lisa and Mara’s circle of friends, it traces the group’s reflexive uncertainty with desire, their evasiveness to sudden change. That edginess—of something pent-up that can’t clearly be voiced—is always clearly, even masterfully, simmering in the background. Take, for instance, the central image of a pencil piercing a styrofoam cup full of red wine: the Zürchers gleefully draw out the moment of inevitability before Mara yanks it out. As the wine pools on the kitchen table, soaking the apartment blueprint from the beginning of the film, it suggests the messy confusion the characters have suppressed, and more literally, the blood coursing through their veins.

The Girl and the Spider screens this Saturday, October 2, at the New York Film Festival, followed by a Q&A with co-director Silvan Zürcher.