The Flowers of St. Francis 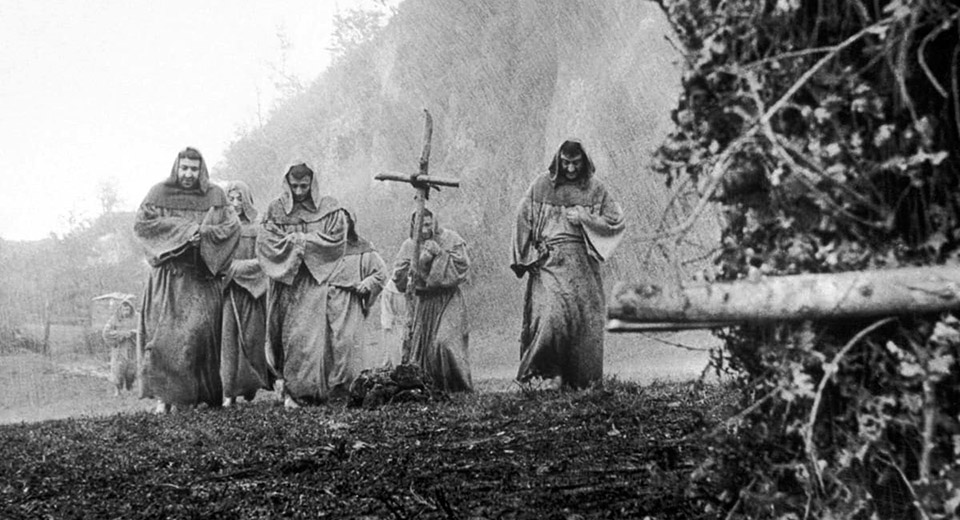 Roberto Rossellini followed two of his perhaps most spiritually bleak and devastating films (Germany Year Zero, Stromboli terra di Dio) with his most joyous, the 1950 film The Flowers of St. Francis. Adapted from the anonymous 14th century Italian novel Little Flowers of St. Francis, Rossellini’s film recounts the exploits of Saint Francis of Assisi and his early followers. The film, a collaboration between Rossellini and scriptwriter Federico Fellini, expressly focuses on the “whimsy” of Saint Francis and his childlike monastic brothers--something made explicit in the film’s italian title: Francesco, giullare di Dio (Francis, God’s Jester).

In The Flowers of St. Francis, Rossellini employed actual monks from the Nocere Inferiore Monastery (the same order Rossellini cast in his earlier film, Paisan) to depict Francis and his followers. The monks run and hop like the small birds Francis famously preached the gospel to, and find themselves in one situation after another which highlights their radical faith and humility. The youngest and perhaps simplest of the monks, Ginepro, gives away his tunic to the needy and returns nearly naked to his brothers. The aged Giovanni comes in search of Francis and mimics his every gesture in hopes of being like the great man.

Rossellini’s utilization of non-actors has never been stronger or more pronounced. When the young Ginepro is allowed to go out and preach, he finds himself in the clutches of a tyrannical warlord played by Aldo Fabrizi (the film’s only professional actor). Puzzled by Ginepro’s lack of fear and profound humility, the warlord brings the young monk to his quarters. In a wordless scene, Fabrizi, mugging like crazy, scrutinizes Ginepro who gazes back at him with a beatific gaze foreclosed to any trained performer. It is the film’s ultimate formal confrontation between fiction and reality, the worldly and the sacred.

Eventually, Ginepro, the youngest, and Giovanni, the oldest, are left behind while the rest of the brothers go out to preach. This unlikely duo provides most of the film’s funniest moments as the two monks attempt to hold down the fort. It’s something like a deeply pious Dumb and Dumber wherein bad decisions motivated by vain stupidity are replaced by bad decisions motivated by pathological selflessness. Both are obviously funny, but the comedy of well intentioned errors Rossellini creates also expresses a belief that the door to God’s totalizing goodness is fit only for the simplest of his creatures.