Emperor of the North 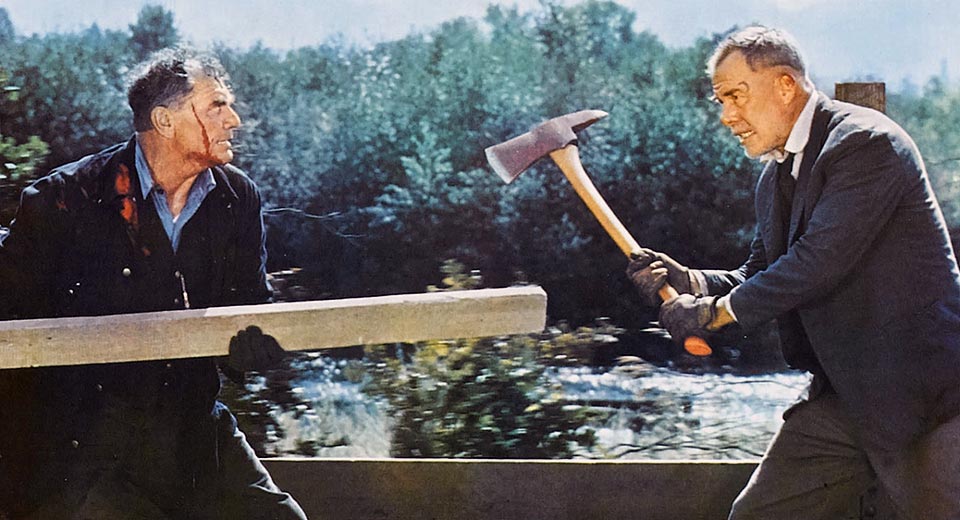 Andrew Sarris, who deemed Robert Aldrich just shy of canon-deserving stature, called him “a moralist in a man’s world.” If Emperor of the North  (1973), a dick-swinging portrait of rugged men during the Great Depression (transposed from Jack London’s memoir of tramping in the 1890s), is typical Aldrich, then Sarris was absolutely right. Starting with the opening credits (which don’t include a single woman’s name) and the title song (with the refrain “I’ve got a dream, a beautiful dream, and it makes me a man”) we are in a thoroughly phallic universe.

As critic Giulia D’Agnolo Vallan pointed out in her introduction this past Saturday, “Aldrich’s antipathy for authority and his empathy for the underclass” is prominent in Emperor of the North. (At the risk of Freudian reductionism, maybe Aldrich hated the rich because his family were prominent Rhode Island industrialists.) Authority is embodied by the notorious conductor Shack (Ernest Borgnine) whose favorite hobo-killing tools are a big hammer and a heavy brake pin at the end of a rope. His MO is throwing fare evaders under the wheels, because he’d “rather kill a man than give him a free ride.” An explanation of his pathological loyalty to Oregon Pacific & Eastern Railway is never attempted—his motivation seems to be mostly opportunistic sadism. The underclass is represented by Lee Marvin’s seasoned “A No. 1” (based on real-life rambler Leon Ray Livingston), the upstart Cigaret (Keith Carradine) who challenges him for the coveted King of the Road title, and the milieu of loud and proud tramps who transmit their legends. The film’s finest moment is a Chaplin-reminiscent chase scene where A No. 1 lures an overzealous conductor into a Hooverville in Salem, where a tribe of surplus-labor-army Merry Men surround and humiliate him by making him bark like a dog and drink piss. “I’m only doing what I’m told to do,” the hapless employee pleads, “You gentlemen ought to understand that!”—a foolish overture to men who have made disobedience their very life principle.

Despite a couple of broad social-diagnostic pronouncements (“Country’s going to hell”), Aldrich’s hobos are not victims of any systemic injustice. The Depression may have doomed them to superfluity, but their legend has retroactively redefined this fate as a sovereign choice (“they became a breed apart. Nomads who scorned the law and enforced their own”). Still, even Shack’s diabolism isn’t absolute. The hobos taunt, “We’ll save you a place on the bread line!”, indicates his replaceability and the provisional nature of class distinctions; a run of bad luck could land him on the other side, begging or hustling for his subsistence rather than “earning” it through socially sanctioned channels.

Also today: the latest Ms. 35, Outside Looking In.