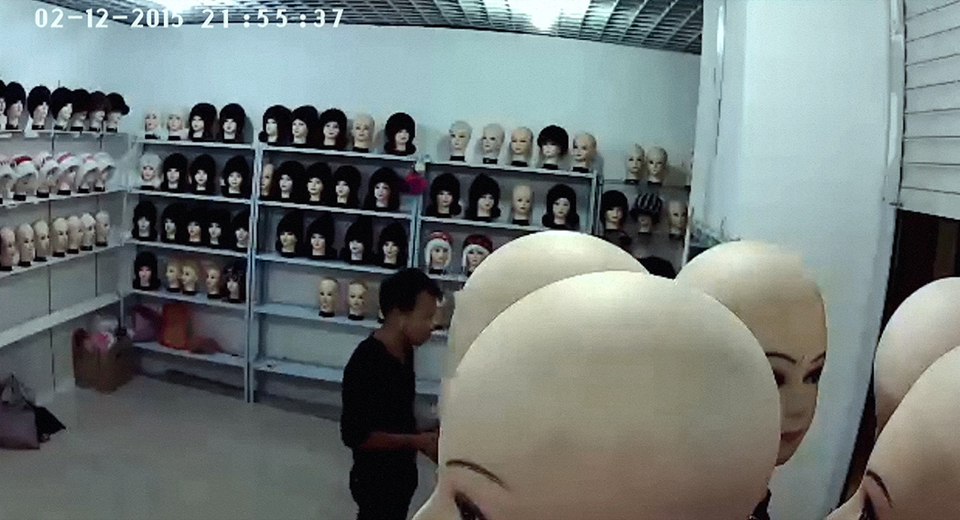 To create his first feature film, multimedia artist Xu Bing winnowed thousands of hours of publicly streamed CCTV surveillance footage down to an eighty-minute volley between the banal and the miraculous in contemporary China. The result, Dragonfly Eyes (2018), presents a gonzo noir-melodrama grafted onto the dazzlingly low-fi spectacle of muddy security images. Xu shuffles us from Youtube-ready "Whoa shit!" clips of natural disasters to the crushing tediousness of cubicle life to public suicides and back again, simultaneously marveling and squirming at the idiot eyes' static gaze.

Xu's delirious plot (courtesy of poet Zhai Yongming and writer/director Zhang Hanyi) might have suited Republic Pictures or George Kuchar in their respective heydays. At the outset, Qing Ting (voiced by Liu Yongfang) abandons her studies at a Buddhist monastery for a position in a massive dairy factory. Loner Ke Fan (voiced by Su Shangqing) becomes smitten with her and the two move to an unnamed, unreal metropolis sutured together from hundreds of security feeds from across the country. Qing Ting is fired from a dry cleaning operation after a run-in with a wealthy client. In response, Ke Fan provokes a series of violent encounters with the woman and her family. He's imprisoned and loses contact with Qing Ting, who undergoes extensive plastic surgery and becomes Xiao Xiao, a livestream celebrity. Ke Fan solves the mystery of his beloved's new identity upon his release, but she disappears soon after he inadvertently reveals her secret to the world. His final move is too fun to spoil.

Their voices remain consistent, but both characters wear dozens of faces throughout the film, which is above all a tour through Chinese public life: workplace cafeterias, apartment complex hallways, intersections, plazas, police stations, collapsing construction sites. American audiences will be forgiven for scanning the film in search of paranoiac thrills concerning Big Brother, but Xu's tone is relatively subdued. His interest rests in the eroding discrepancies between reality and its mediated double. Surveillance is no longer the strict purview of the state, but a matter of ubiquitous social hygiene.