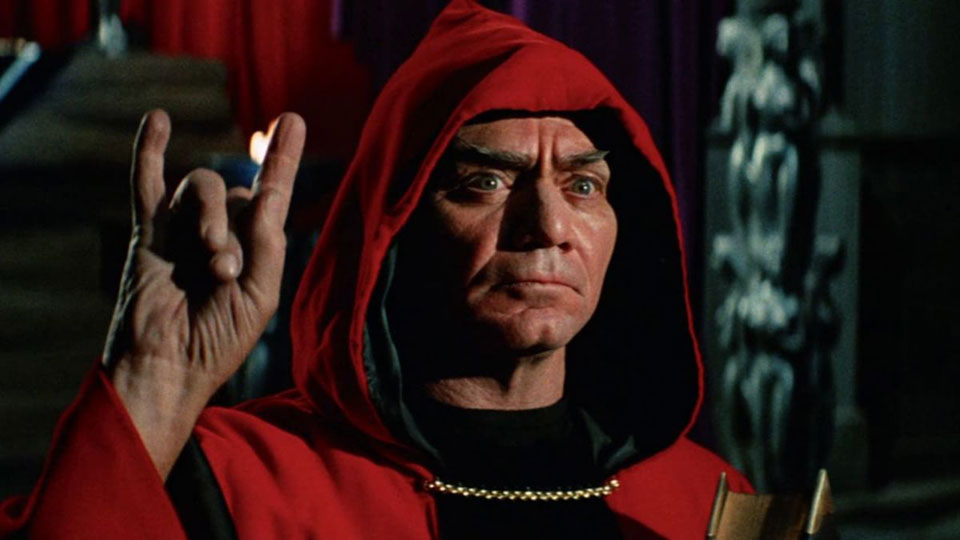 The Devil’s Rain is the exemplar of a certain kind of 1970s American horror movie: slow, weird, “plotless,” and depressing. It’s the kind of movie that made Roger Ebert say, “The problem is that the material's stretched too thin… No doubt that's why we get so many barren landscapes filled with lonely music and ennui.” But what could more accurately depict the hollowed-out core of the post-Nixon American soul than nothingness, ennui, and a deal with the devil?

Ernest Borgnine delightfully chews the scenery as Satanic priest Jonathan Corbis, possibly a ghost or the descendent of the first Jonathan Corbis, also a Satanic priest who was burned alive in early colonial America. Corbis is searching for a book with his disciples’ names signed in blood, and the Preston family, Corbis’s colonial nemeses, has it. Those disciples’ souls are trapped in the “devil’s rain,” a mirrored urn containing the wailing, misbegotten souls who are subject to constant literal rain in their purgatory; Corbis wants to free them in order to use Satan’s power to rule over the world. Detailing the plot (as it were), one can start to see why folks like Ebert were baffled by the film.

The Preston family includes William Shatner at the height of his Star Trek powers as Mark, who is immediately taken captive by Corbis and his acolytes; a moustached Tom Skerritt as his brother Tom; and a heartily welcome Ida Lupino, who plays Corbis matriarch Emma and, unfortunately, acts with a heavy prosthetic mask on for most of the film. Those masks, which give Corbis’s Satanists a creepy, blank visage complete with hollowed-out eyes, were eventually mass-manufactured by Don Post Studios and used as Michael Myers’s famous blank face in John Carpenter’s 1978 Halloween.

The film as the origin of the blank, unfeeling Michael Myers visage alone would give The Devil’s Rain (directed by horror vet Robert Fuest, best known for his Vincent Price classic The Abominable Dr. Phibes) a place in horror history, but there’s more: the extended Satanic rituals in the film were overseen by Technical Advisor Anton LaVey, who also has a brief cameo; and the film is the feature debut of John Travolta. The film’s poster boldly declares “The most incredible ending of any motion picture ever!” and while that’s an audacious statement, the final ten minutes of the movie almost live up to it. Slow, goopy, and pessimistic, The Devil’s Rain is the perfect addition to your Halloween playlist.

The Devil's Rain is streaming on Prime and Tubi (October 2020)