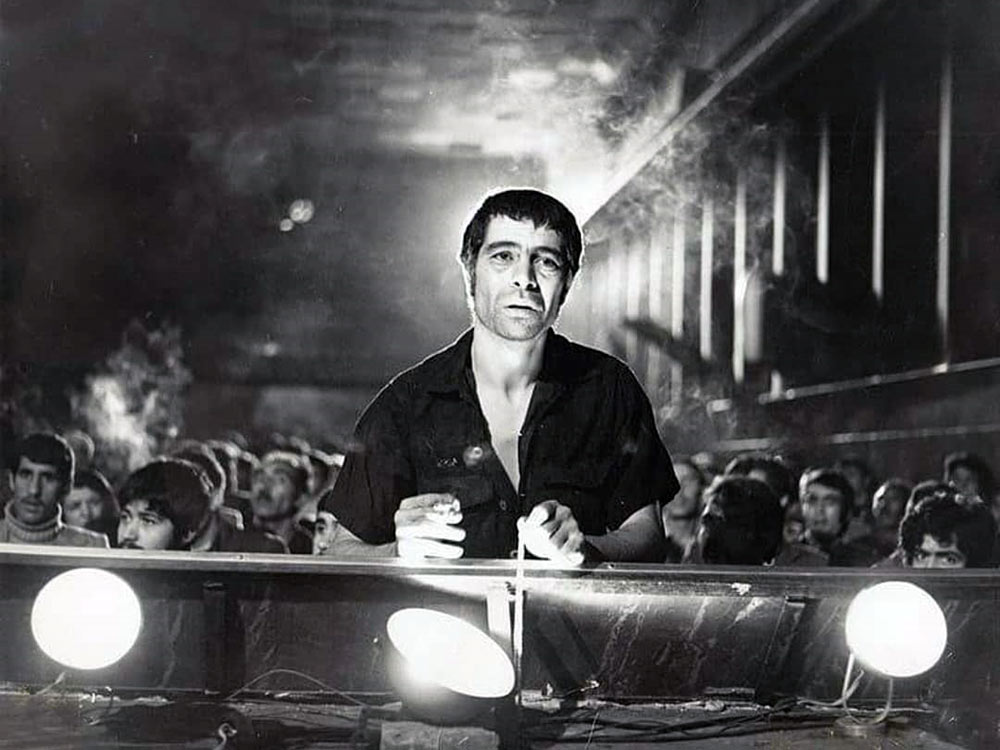 Although it’s considered a classic in Iran, Western audiences have been unable to see The Deer until earlier this year, when an attempted reconstruction of director Masoud Kimiai’s original cut toured film festivals. Made in 1974, The Deer was held up by the Iranian government until 1978, when a cut shorn of 20 minutes and with an altered ending was released. The version of The Deer now streaming on projectr.tv through May 26 brings back the full runtime and the original, violent ending.

Kimiai’s 1969 breakthrough, Gheisar, has been singled out as an exemplar of the “filmfarsi” genre. A macho thriller about a man hunting down three brothers to avenge his destroyed family, it rivals the pulp verve of Sam Fuller or Donald Siegel while also stalking the no-man’s-land between neorealist social exposé and grimy noir. It opens with the reunion of two old friends: wounded robber Ghodrat (Faramarz Gharibian) walks into a theater where Seyed (Behrouz Vossoughi, also the star of Gheisar) works odd jobs and asks him for help. Seyed invites him back to his apartment. After spending some time together, Ghodrat realizes that his friend is now addicted to heroin. What’s worse, Seyed supports his habit by helping his dealer sell heroin to children.

The mood of despair and disenchantment hanging over The Deer stems both from wounded masculine pride and the pressures of poverty, supplemented by the harsh, rough look of the film’s cinematography (and even the unintentional presence of scratches on the copy — the film itself now looks as battered as its characters). Seyed used to be Ghodrat’s protector and role model; now he’s been all but destroyed by drugs, looking way beyond his years. (Vossoughi’s performance has been justifiably praised, even compared to career-peak Brando.) The loops of corruption in which Seyed’s dealer has tied him and his forlorn lingering around the edges of Tehran’s theater scene, socially barred from becoming an artist himself, hint at a larger allegory of the country’s systemic problems. His friendship with Ghobrat suggests the first steps of a collective underclass solidarity, but their prospects remain bleak.

The Deer has taken on an importance in Iranian cinema beyond its own content. It was playing during the 1978 arson attack on the Cinema Rex, one of the key events leading to the Islamic revolution. (Last year, Shahram Mokri’s Careless Crime circled around that attack, constantly alluding to The Deer.) Now 79, Kimiai still lives and works in Iran, having finished a film last year, although his post-revolutionary work has not had the same impact as Gheisar or The Deer.