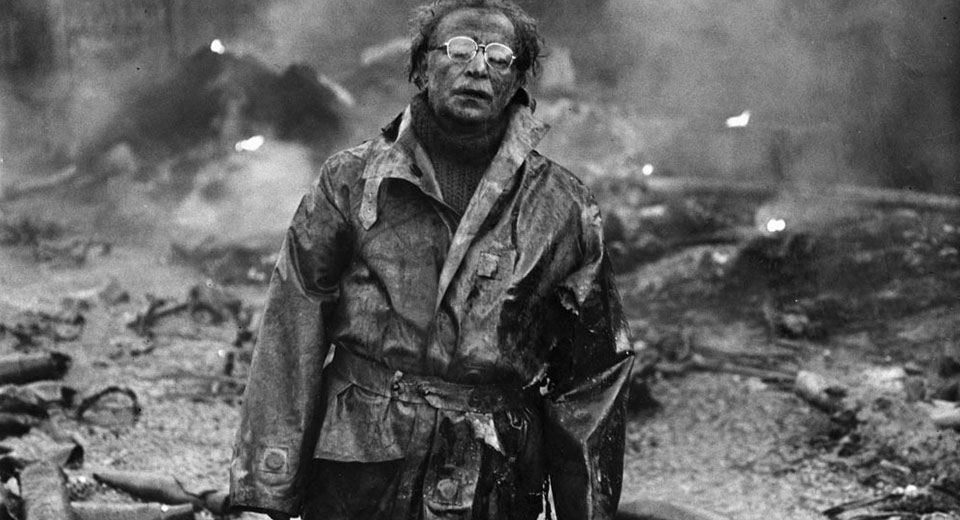 Debris is everywhere in Dead Man’s Letters.  Nuclear war has already ravaged the planet, and the characters take shelter in the dilapidated bowels of a museum basement, full of plastic-wrapped statues and shelved paperwork. Outside, they’re surrounded by toxic sludge and mountains of crushed machinery, odd car parts, and reams of bureaucratic paper. The specific objects conjure up nuclear-age anxieties about technology and government, but they’re also simple indicators of the sheer amount of stuff that the human race produces—seemingly inevitably so, even if the wreckage is futile when doomsday rolls around.

Similar philosophical questions fuel Konstantin Lopushansky’s preoccupation with aspects of the human condition that might seem illogical on paper: why would we make art if it serves no functional purpose, and why would we show compassion in disaster instead of saving ourselves? Lopushansky isn’t asking this coldly or clinically, but with genuine affection for these tendencies, especially in light of his characterization of human history as an inevitable march towards “slow suicide.” As Nobel Prize–winning physicist Professor Larsen composes letters to his son, still in denial that he perished in the disaster, he’s tortured by the tension between logic and senselessness that arises when his scientific instincts confront global realities. The film renders Larsen’s husked world in measured tracking shots and slow zooms, some of which may call to mind a trip to the Zone—Lopushansky served as a PA on Stalker, and often cites Tarkovsky as a crucial mentor. But when memories of the nuclear event do surface, Lopushansky adjusts his style accordingly, allowing the explosions to overwhelm the film’s silent-era sepia tint and cutting to close-ups of the characters breaking down in tears. He gives emotion the requisite space to suggest that it might be the most human resource we have, but he doesn’t frame it as a naive solution, just an engine that persists even when we’ve destroyed ourselves.

This might be a stressful prognosis when watching Dead Man’s Letters in 2017—not to mention in its original release, since it premiered just a few months after Chernobyl—but Lopushansky’s interest in the kinder aspects of human nature manages to be touching without feeling trite, and inspires some hope without promising salvation. It gains much of its power from seeming frighteningly close to home, but by avoiding a blanket demonization of technology or humanity, it engages more fully with the nuances of our existence.