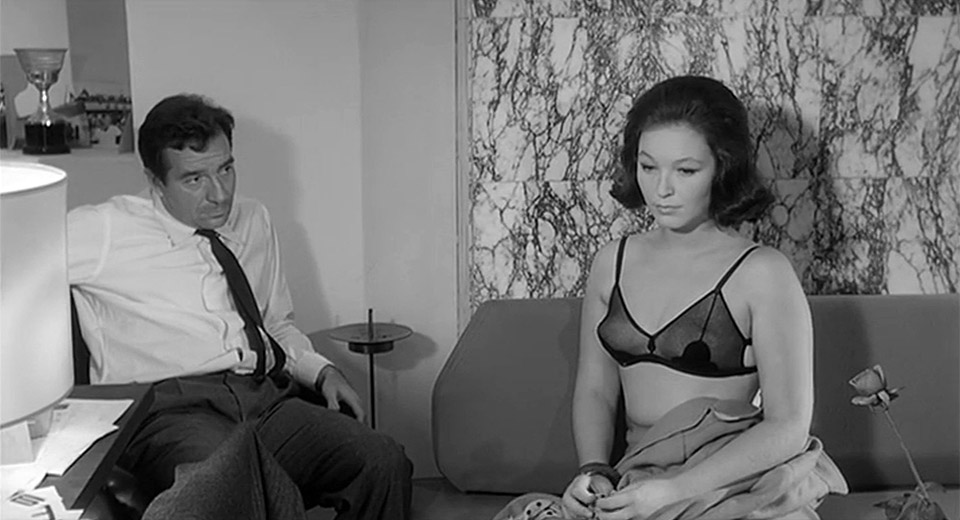 Marco Ferreri ambivalently charts the ugly, sweaty corners of masculinity in his fourth film, The Conjugal Bed (1963), playing this evening as part of MoMA's series surrounding star Ugo Tognazzi. With this, the first of over a dozen collaborations, director and star manage an unsettling sleight of hand in which masculine self-pity shapes the story's pathos while also supplying much of its satiric weight. The Conjugal Bed despises and worships male bravado as much as it fears and worships the female body.

When we meet the beleaguered and reprehensible Alfonso, he's 40, newly engaged and tearing himself from a promiscuous past. He sells cars in Rome, but he's really peddling his own neuroses as charm. His young fiancée Regina (Marina Vlady) rebuffs his overtures so that she arrives in their wedding bed as pure as Saint Lia, whose miraculous beard was a gift from Christ to help her ward off rapists. After consummating the union, Regina's vigor supersedes Alfonso's, whose potency wanes. A priest prescribes restorative ass injections without success. Alfonso eventually becomes disposable when Regina conceives. As new life grows inside of her, his own wilts until he's bedridden and shuffled into a closet down the hall from the master bedroom. She keeps his business afloat while he putters in a haunted daze, beset by the Catholic church's menagerie of sex and death.

Traces of Ferreri's trademark gallows surrealism peak through, mostly as background gags like a crucifix seemingly stuffed in a basketball hoop and the loopy shrine dedicated to St. Lia and her beard. Such flourishes keep the proceedings afloat while director and star stumble through painful contemporary truths concerning male estrangement, an ailment obscured by patriarchal order. Ferreri and Alfonso's ultimate despair at the functionary role for men in the cycle of birth, sex and death leaves little room for female perspectives, but they never entirely validate Alfonso's hysteria.