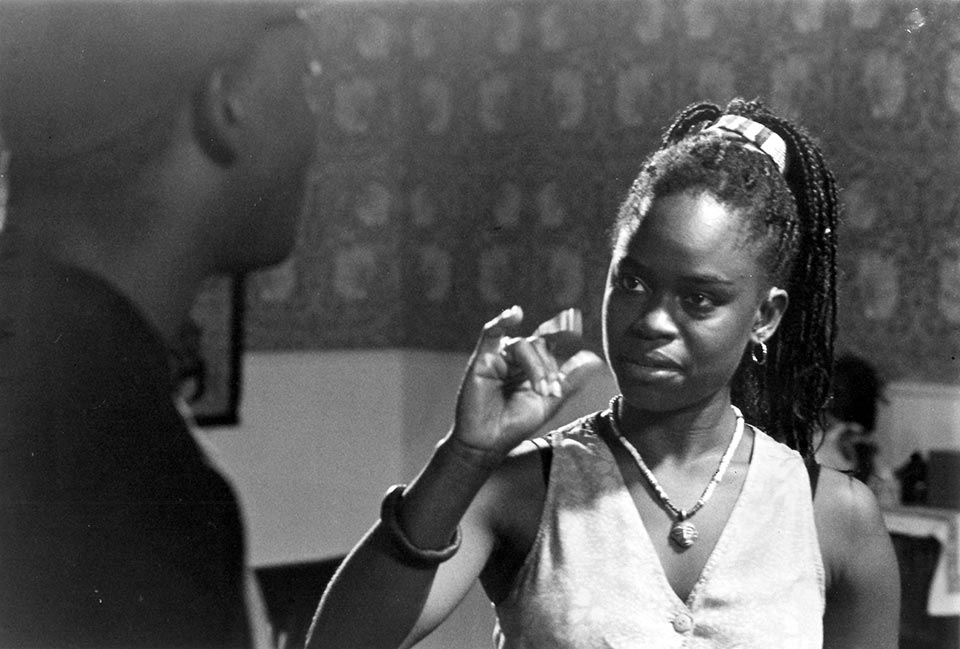 “Education – Employment – Enlightenment!” These words are emphasized in a series of intertitles towards the end of the first act of Compensation, now on the Criterion Channel in a collection of films by L.A Rebellion director Zeinabu irene Davis. A blossoming group of African, Caribbean, and African-American filmmakers centered around UCLA from the late 60s to the 90s, the L.A. Rebellion might have taken these words as an apt description of their goal to produce, distribute, and sustain an independent Black cinema. Within the film, however, they connect the parallel Chicago-set stories of two deaf Black women: Malindy (Michelle Banks) in the early 1900s, and Malaika (Banks, in a double role) in the 90s.

Malindy and Malaika both wonder if the path to Enlightenment is open to them. The bright Malindy is barred from attending a segregated school for the deaf. Malaika, a print shop worker, is unsure whether she’s up to attending a hearing university to become a designer, spending her off-hours within the comfort of her Deaf community. Suddenly, another path reveals itself, in the form of romance. Arthur (John Earl Jelks), a North-bound migrant laborer, meets and courts Malindy on the beach, and she takes up the task of teaching him to read. Nico (Jelks), a librarian, meets Malaika the same way, though his difficulties lie with learning ASL and acclimating to Deaf culture. Hardly a scene goes by where someone is not educating or being educated, and the film itself will likely be instructive for hearing audiences, due to its experimental mixture of archival imagery, intertitles, ASL, and subtitles.

Interabled relationships on film are often prone to a sociological pessimism that renders them inherently dysfunctional. It is a bridge too far, there are simply too many barriers. And if they do persist (implicitly despite the presence of disability), they’re at best paternalistic, at worse abusive. But Compensation never forgets what it’s really about, and its focus on love as an education — the greatest of them all — reveals it as a gradual, patient, and sometimes comical process of mutual self-advocacy and communication. Its treatment of interabled relationships ranks among the best I’ve seen, alongside Harold Russell and Cathy O'Donnell’s turbulent reunion in The Best Years of our Lives.

As the film’s title foreshadows, the couples must soon take a detour away from Enlightenment. Their troubles come less from within than from the world around them. Long hours in an unsanitary slaughterhouse weaken Arthur, while Malaika must counter the disapproval of her friends, who don’t believe hearing-Deaf relationships work. Attacked by the dual pathologization of race and disability, they learn that the education of love is a necessary means of survival. The film’s galvanizing conclusion, which touches on the AIDS epidemic of its time, carries this message forward. Amidst deadly ignorance, the only possible response is to open the mind and the heart.