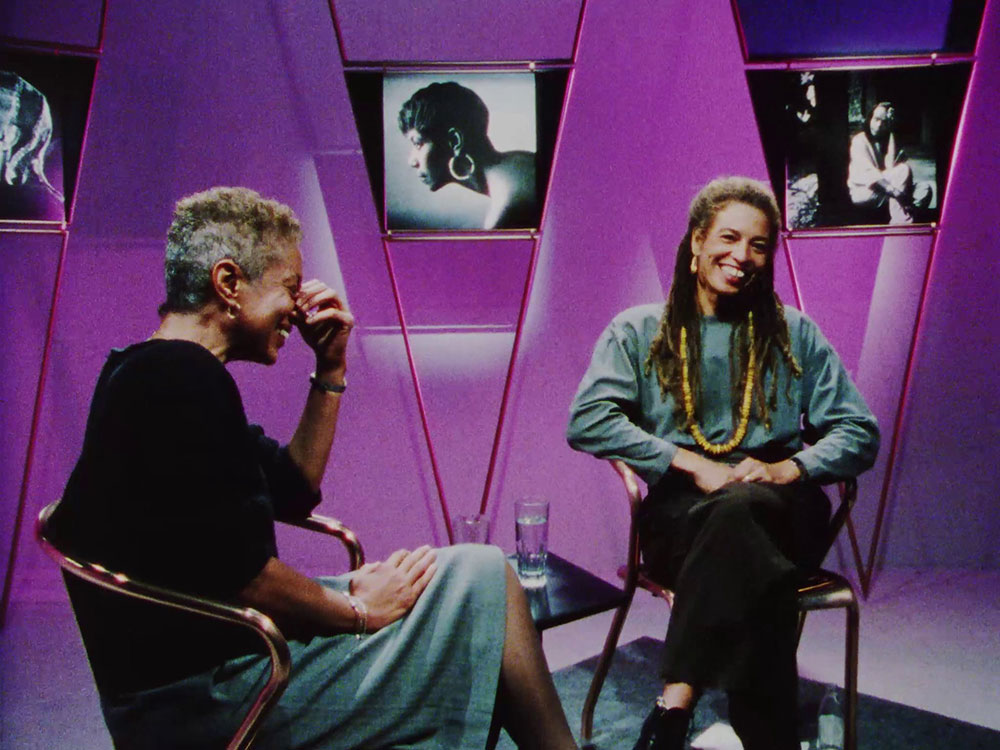 What is the destiny of the woman? The women in “The Work We Share,” a series of ten films curated by the UK feminist film and video distributor Cinenova, aren’t asked who they want to become. Others choose for them: Mothers, wives, laborers. “I couldn’t figure out where ‘I’ was,” describes a woman in Adriana Monti’s School without End (1983). The ten films in Cinenova’s series wrestle with the question of self-determination. How does the woman determine herself authentically in a world in which her fate has been dictated to her by patriarchy, by anti-Blackness, by empire? Some films answer in fiery, expressionistic breaths, like Noski Deville’s Loss of Heat (1994). Others use reality as their force, bleeding with the lived stories of working class women, as in the collectively directed Women of Rhondda (1972). “The Work We Share” traverses the dimensions of female self-becoming, from frustrations of labor to the volatility of desire.

Cinenova introduced this series with an acknowledgement of “interdependency.” Recovered from precarious conditions, these films—all shot on 16mm—were digitized through volunteer efforts. Interdependency is also the mode in which the women in “The Work We Share” struggle for their liberation. Sweet Sugar Rage (1985) centers around a sugar cane farm in Jamaica. The women who work on such farms are expected to serve their husbands, feed their children, and clean the home. They are paid less than the male farm workers; they are tired and angry. Through workshops and plays conducted by the Sistren Theatre Collective, these farm workers enact scenarios in which they challenge their superiors and demand fair wages. After each play, the audience provides comments and ideas. One audience member raises the quandary: how do you change the beliefs of men who don't want women to be paid equally? What can be done about the "system"? The women absorb these questions, incorporating them into the next iterations of their plays. With Sweet Sugar Rage, performance becomes a process of determining oneself—of paving a path, even if jagged, towards liberation.

If the collective allows a path towards liberation, so too must the individual. The body becomes the focus of Laleen Jayamanne’s A Song of Ceylon (1985), which mockingly takes its title from a 1934 ethnographic film commissioned by the British colonial government. An adaptation of an account of a spiritual possession in Sri Lanka by the anthropologist Gananath Obeyesekere, Jayamanne’s film uses the ideas of possession and exorcism to illustrate the history of a country colonized thrice over. “This is how the other starts,” a voice narrates as we watch hands slithering across torsos, writhing feet. In A Song of Ceylon, the body is destabilized; the body becomes discontinuous, consumed by lust. Jayamanne maps the colonial history of Ceylon—once under British rule, now Sri Lanka—onto the torrid geography of sexual passion.

Yet the body is equal in its potential to control and to be controlled. Jacqui Duckworth's A Prayer Before Birth (1991) explores the paradox of power in a viscerally personal form: Duckworth's own loss of bodily control due to multiple sclerosis. The body becomes alien—almost antagonistic. Duckworth sits across from an empty chair, the figurative ghost of a once “normal” body, and asks: “Wasn’t I good to you? Didn’t I feed you? Didn’t I love you?” Women are trapped in themselves—or at least, the women of Monti's School without End, who have participated in a 150-hour long secondary school course; after the course ends, the women continue learning. Their thoughts after their education wrestle with the claustrophobia of traditional gender roles—a “psychological prison,” Teresa describes. Another woman, Lea, writes about wanting to forego her gender and live only by her true desires—reading, writing, and thinking—but is chained to preconceived ideas of femininity. Lea shops with a friend, and upon buying perfume, is told by her friend: “You are a woman after all!”

Then, the ultimate tension: what happens if we cannot become who we want to be? What is necessary in the struggle to determine ourselves? The films in “The Work We Share” answers: rage. Duckworth reacts with apoplectic fits of anger. She throws chairs and smashes mirrors—all of which allows her some fraught control over her body. The twenty women in School without End are frustrated by their imprisonment in their domestic lives. So the theme song goes in Sweet Sugar Rage: “Every day we wake up/It’s the same condition/Long time we’ve been working/Frustration remaining.” One of the longer films in the series is Pratibha Parmar’s A Place of Rage (1991), which locates the activism and labor of women as the engine of the cultural movements of the ‘60s. “Rage has lost its respectability since the 1960s,” June Jordan says scathingly in the film. "Personally, I don't consider myself a minority," Davis says in a speech. "As a matter of fact, I consider myself as a majority within a majority." Collective rage freed Davis from jail in 1972. Collective rage—particularly of Black women and women of color, in solidarity—gave definition to the civil rights revolution. Women have fought, Jordan reminds us, out of perseverance, and "not to be fighting, but to get some place else: where tenderness is possible."