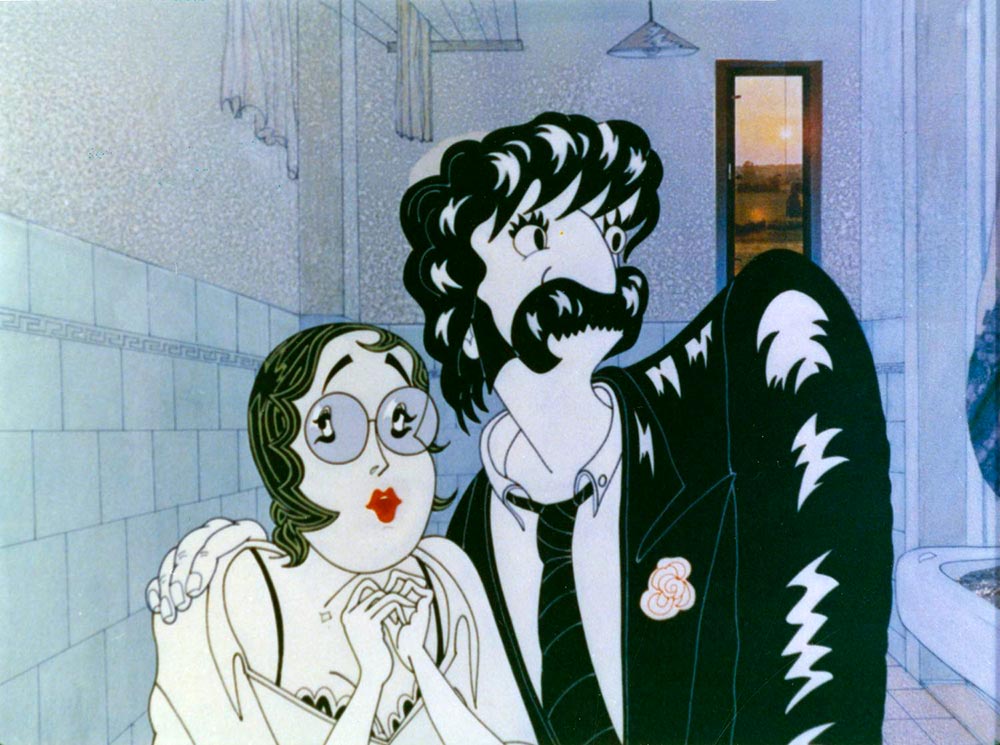 György Kovásznai’s Bubble Bath (1980) is subtitled A Musical to a Heartbeat, and whatever heartbeat we find in the Hungarian animator’s sole feature film is frenetic, delirious. Characters in this film tremble so unremittingly that their beards shake, their glasses float from their faces, their bodies dissemble, and the space around them capsizes entirely. A man is so nervous to meet a woman that he withers into a mere dot upon seeing her. Form abdicates to neurosis in Bubble Bath. What is the human form if not a withering muddle of nerves?

The expectation of coherence would be a misguided approach for viewing Bubble Bath. Kovásznai, influenced by the rebellious ethos of Hungary’s avant-garde scene in the 1950s, would surely scoff at the idea that his art should adhere to order or any rule at all. Thrillingly animate in Bubble Bath is this total rebellion against sensibility. The story, if we deign to tether the film to such a structure, is this: Zsolt is due to be married to the beautiful Klárika. Anxious, Zsolt turns to Klárika’s colleague, Anní, for succor. He tries to convince Anní to call his wife-to-be and communicate the following:

Inform her briefly that I’ve broken down. Which is true. Let her know that my blood sugar is dangerously high, and that my body’s salt balance is criminal. And console her. Tell her I still love her. But her family perforates my appendix. I had no idea her family was so huge. She’s got twenty-three cousins!

The film overflows with such dialogue, sometimes spoken and other times sung in the style of opera or jazz. Zsolt is painfully humiliated that a family relative spotted him with pins in his ass (“What does my ass have to do with anything?,” he ponders, as do we). Klárika, who stands in the way of Zsolt and Anní’s blossoming romance, confesses that she wants to wed Zsolt solely to spite an ex-lover who called her a “simple mid-level apparatchik.” Characters croon about hopes and dreams and washing machines. Their hearts cramp with either anxiety or love—is there a difference here? There is no making total sense of Bubble Bath’s strangeness, just as there is no making sense of our fretting hearts.

Don’t be deceived by its whimsicality: Bubble Bath is expressly political. Kovásznai, who grew up in the shadow of World War II, left his fine art studies as a young man to work in the coal mines, more interested in gaining “real experience from the proletariat” than a diploma. He, like the characters of Bubble Bath, were witness to revolutions violently crushed: the Hungarian Uprising in 1956 and the Prague Spring in 1968. Like his short stop-motion film Memory of the Summer of ’74 (1974), Bubble Bath seeks to depict the agitated ennui of a country longing for a new order. Beneath this film’s jovial insouciance is something closer to punctured hope: Zsolt, Anní, and Klárika dream of lives for themselves that simply cannot be. And, in its final stretch, Bubble Bath broods with the faint discontent of a generation spurned.