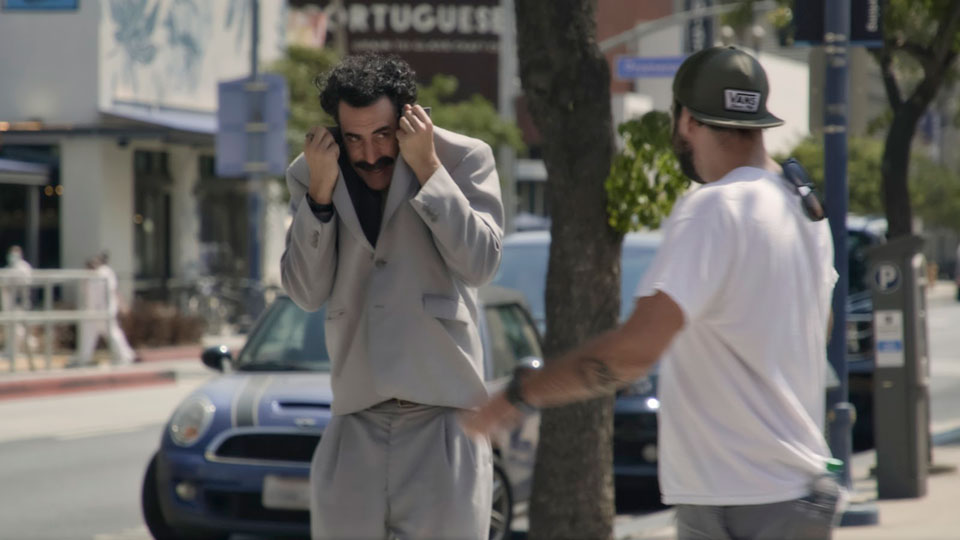 Borat is as much an object of the Iraq War era as Juicy Couture tracksuits, desktop day calendars of George W. Bush malapropisms, TiVoing The Daily Show, and pervasive baseline casual racism toward anyone who looks like, well, Borat. Like Jon Stewart, Sacha Baron Cohen represented the mid-aughts notion that well-educated comedians could use humor as a disarming mechanism toward unwitting subjects and eager audience members alike, goading them to confront the hypocrisies at the heart of dominant conservative political ideology and pave the way for the United States to reclaim its moral standing after the fraudulent War on Terror and its untold (and to date unpunished) violations of the Geneva Conventions. Typically it’s wrong to judge comedy by its political efficacy. But after Stewart’s watershed 2004 appearance on Crossfire — during which he delivered an ignominious dressing-down to Tucker Carlson that seemed to torch the young conservative host’s career before it had even really started — entertainment industry satirists leaned into their political power. Flash forward to 2020, Borat Sagdiyev has returned, and Cohen has told the New York Times, “I felt like I had to ring the alarm bell and say that democracy is in peril this year.” It’s therefore not totally a surprise that this sequel, produced with evident urgency during the course of the COVID-19 pandemic, concludes with a title card that says — spoiler alert — “Now vote.”

So, Borat Subsequent Moviefilm: Delivery of Prodigious Bribe to American Regime for Make Benefit Once Glorious Nation of Kazakhstan is undisguised liberal agitprop. But for most people the important question is: does Borat still say “mai waif,” and is it still funny? The answer, for the most part, is yes. The scripted sequences of Cohen in character as Borat Sagdiyev are its most entertaining: Cohen inhabits the role like a virtuosic musician drawing on muscle memory, bringing a familiar walk, fit, and inflection that belies his 14-year near-absence. When we meet Mr. Sagdiyev, he’s willing away in a prison camp not unlike Stallone in First Blood Part II, having disgraced his fictionalized Kazakhstan with his first journalistic foray. Like John Rambo, he’s plucked from his chains to fulfill a secret mission to elevate the leader of Kazakhstan to the ranks of other strongmen leaders like Kim and Duterte by ingratiating him with U.S. President Donald Trump by gifting him a famous monkey, the nation’s leading pornographic film star. But after he arrives in Galveston, TX to meet his drop, he finds that the crate instead contains his 15-year-old daughter, who is made to suffice as an offering to Mike Pence and Rudolph Giuliani.

Tutar Sagdiyev (cited in prerelease materials as Irina Nowak, but named in the credits as Bulgarian actress Maria Bakalova) is effectively the film’s co-lead, and she follows a similar path of cultural acclimation as her father did in the previous film. The mind reels wondering how the production managed to cast someone who could not only repartee with Cohen but match his unwavering commitment to character during unscripted sequences — among them visits to an abortion clinic and a debutante ball — but Bakalova is a lithe comedic presence. The duo’s relationship lends the film a more traditionally crafted and, one might even say, mature narrative arc that is at times moving, such as when Tutar’s father relents to her demand to buy her a larger cage. (A farm equipment supplier who has just advised what size propane tank is necessary to exterminate a van full of gypsies is happy to oblige.)

However, the film’s meat-and-potatoes candid camera stunts are more of a mixed bag. In order to skirt the public’s familiarity with Borat — which is canon to the film’s narrative — the character largely appears in layers of additional disguise, which are played as Borat-in-character rather than full-fledged new creations. (For the most part he resembles Billy Wayne Ruddick Jr., PhD, the right-wing conspiracy theorist of Who is America?) Much of the film’s midsection, which revolves around various cosmetic procedures Tutar attempts to undergo, and the duo’s efforts to raise the money to pay for them, is not particularly memorable. It’s only when the metanarrative picks up and dovetails with a third-act effort to reach Giuliani that it regains its urgency.

Further to his work’s political ambitions, Cohen’s audiences have come to anticipate a “smoking gun,” and whether Borat Subsequent Moviefilm delivers may be more a matter of people’s cynicism regarding scandal fatigue. Without revealing too much, it climaxes in an as-yet unpublicized incident that in, say, 2006 (or even 2016) may have been regarded as shocking — but I can’t help but feel like it will wash away like so many liberal tears in the rain after the inevitable press cycle around it winds down.

There lie the limits of hypocrisy and humiliation in a shock-the-vote comedy PSA: there is no shaming people untethered from reality and lacking common moral principles. This seems like something that’s obvious to most Americans. But to celebrities who have spent the year terrorizing a quarantined, pandemic-stricken public with manufactured viral videos of John Lennon singalongs? As Jon Stewart would say, “not so much.” Releasing the same week as it’s reported that Joe Biden is vetting Republicans who supported the Iraq War for his cabinet, Borat 2’s “don’t just laugh, vote” mandate — and this viewer’s resigned acceptance of lack of present alternatives — is demoralizing. Fortunately for Borat and Tutar, it’s suggested that their fabled Kazakhstan may fare better.