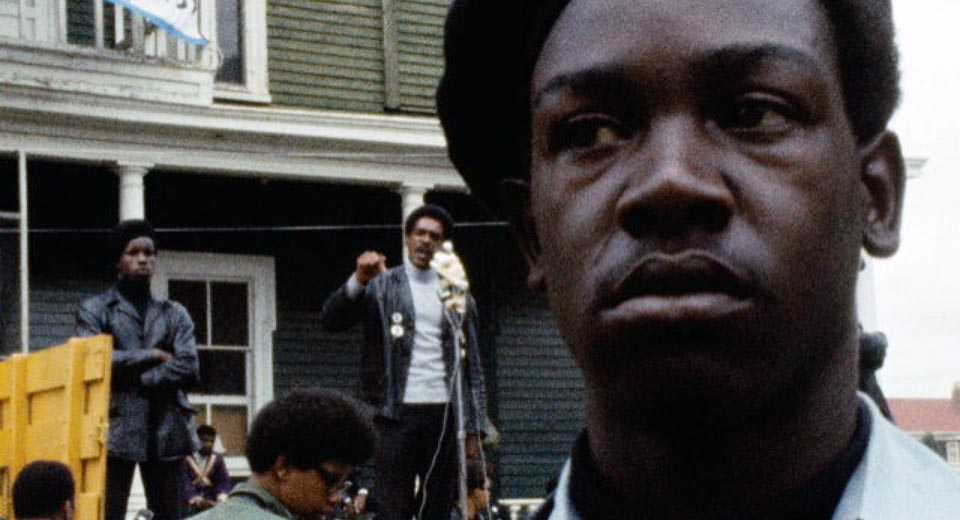 BAM’s series Varda in California, which runs from May 31 through June 13, highlights the documentary work of one of the unshakeable pillars of French Cinema, Agnès Varda, and the work she did while in California. One film in the series that resonates particularly well with the current social and political climate is the 1969 short film Black Panthers, screening daily throughout the series run. In Black Panthers (also known as HUEY) we see Varda’s skills in top form, combining the poetics and time manipulating possibilities of montage with the long-take and precision sound editing to create a work of art that is both energizing and edifying.

The action of Black Panthers centers on a rally in Oakland held on the birthday of the imprisoned Black Panther Party cofounder, Huey P. Newton (a figure who, sadly, exists largely in the realm of the moving image through prison-based interviews such as John Evans’ Prelude to a Revolution), where prominent figures within the party give impassioned speeches calling for Newton’s release and outlining the Panthers’ famous Ten-Point-Program.

Varda’s great skills as a filmmaker allow her to collapse time in Black Panthers. The speeches of Stokely Carmichael, Bobby Seale and others are truncated, but thanks to Varda’s expert weaving the viewer experiences the electricity of the crowd, the power of the words, and the kinetic excitement of the event in a seamlessly crafted long-form montage. Sound is key to Varda’s film—laying the bedrock which unifies the images and allowing her to move between collage-like montage and long takes of speakers, often shot from an intimately partial view from the side of the stage. The long takes give ample time to the specifics of the policy the Panthers sought, delivered in their own words. This is one of the most valuable aspects of Varda’s film, it does not generalize, it deals simultaneously in human details and political realities.

The film was shot in 1968, the same year of the May '68 protests in France and other far reaching global protests. Black Panthers views the revolutionary politics of the Black Panther Party for Self Defense through the lens of a European filmmaker, someone who is much more familiar with the real possibility of leftist political power. This is of particular interest given the Black Panthers and Black Power place in the popular historical memory, maybe too often being remembered for an aesthetic and as simply the militant extreme of the civil rights movement providing the secret threat of violence lurking behind the pacifistic mainstream. Varda’s view however sees the demands being made by the panthers for what they were, not merely symbolically or culturally meaningful or supplemental, but concrete and achievable political demands, that when heard in the words of the speakers Varda documents, are revealed to still be essential for achieving true justice for black americans, and for challenging the systemic racist criminality of the United STATE of Amerikkka.