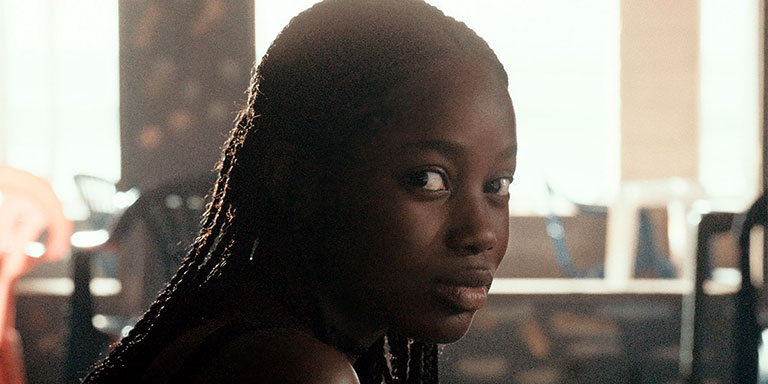 Bound and bounded by ever-churning waves, the practical and supernatural merge in Mati Diop’s feature debut Atlantics. A fairytale grounded in the reality of Senegalese immigrants, filmmaker/actress Diop and the film’s non-professional actors work together to build something carefully balanced. For some, it might still tip towards being no more than a particularly beautiful X-Files episode, but as her 2009 short of the same name and subject was avant-documentary, this film takes that intentional risk.

The inciting incident is undocumented construction workers laboring on an ultramodern spire demanding four months’ back pay. Denied, they seek better fortunes sailing to Spain, despite not knowing how to pilot a boat. Souleiman is among them, leaving Ada and the other abandoned women bereft. There’s something unsettling about restless spirits lost at sea using women’s bodies as vessels, literally displacing them to exact revenge on a crooked contractor, but it happens because the possession was already present. Seeing the women slumped silent around Dior’s bar after hearing the men left, there’s a clear emptiness waiting, even hoping, to be filled. The parallel between fever overtaking the possessed at sundown and the untraceable combustion they ignite is obvious, but for the concrete police it’s frustrating enigma.

Finally confronting the contractor, the spirits claim whenever he looks at the tip of that tower he’ll think of them. Perhaps, but who else will? Theirs is invisible work; Diop tries to make their whole world visible. The actors are people found where we find them in the movie — Dior worked at a discotheque, Ada was a listless young woman planning to marry, Souleiman worked at a construction site — playing avatars of themselves. The film notes the future is (literally) built on exploitation, and rejects it by focusing on a present so intense it becomes timeless, what Diop in a Film Comment interview dubbed the hyper-present.

The fairytale revenge feels satisfying because it’s justice, it’s something. That’s almost dangerous for a film otherwise steeped in realism, as the situation feels resolved for the audience, when the underlying problem, and a world where there is no justice, remains. At the film’s end the money is carelessly tossed, revealed as mere paper, but surrounding and reflecting the warm bodies to whom it meant a life.

Atlantics was reviewed at the 2019 Toronto International Film Festival and also plays at the New York Film Festival October 9 & 10. It arrives in theaters November 15 and on Netflix November 29.