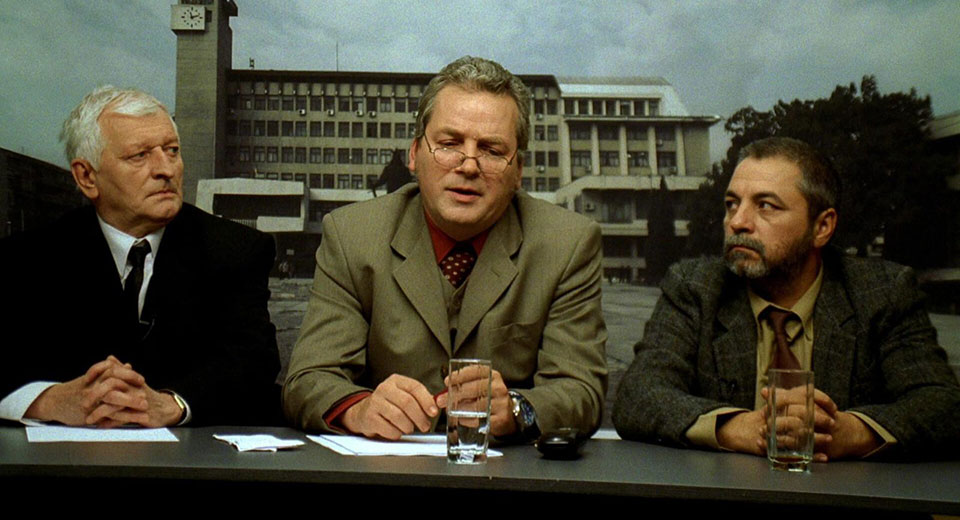 At 12:08 pm on December 22, 1989, 14-year-old Corneliu Porumboiu was playing ping-pong. The director remembers exactly what he was doing, and where, for the same reason that everyone in the United States can tell you precisely where they were on the morning of September 11, 2001: that particular date and time marked the instant that his nation's history was irrevocably altered.

For Romanians, though, December 22 is a day to celebrate: 12:08 pm was the moment that longtime dictator Nicolae Ceaușescu fled the protests in Bucharest in a helicopter, symbolically marking the success of the Romanian Revolution and the fall of communism. (Ceaușescu and his wife would, shortly thereafter, be executed by firing squad.) Porumboiu's debut feature, 12:08 East of Bucharest — playing twice today at Film Forum — is set on the 16th anniversary of Ceaușescu's flight, and finds a local television show host probing whether or not his town can be fairly said to have participated in the revolution.

Constructed in two halves, 12:08 East of Bucharest serves as a delightful introduction to the dry, dark Eastern European humor you'll find throughout Film Forum's ongoing Romanian retrospective. The first portion of the movie introduces its three main characters: The faux-intellectual television host, Virgil Jderescu (Teodor Corban), and his two eye-witnesses, town drunk Tiberiu Manescu (Ion Sapdaru), who claims to have ignited the local protests by getting into a scuffle outside the town hall, and Emanoil Piscoci (Mircea Andreescu), who is happy to admit that he was too cowardly to join in until after 12:08, when it was clear dissenters would be safe. The second half of the movie plays like you're watching the actual live feed of their televised debate, complete with hilariously amatuer framing and zooms.

But for all the comedy, of which there is plenty, 12:08 East of Bucharest is also startlingly sober, ending on a note that is very nearly profound. Porumboiu, though, does not share Virgil's obsession with the past. Rather, 12:08 East of Bucharest asks its audience a simple question: What will you be prepared to say if someone ever has cause to ask where were you?