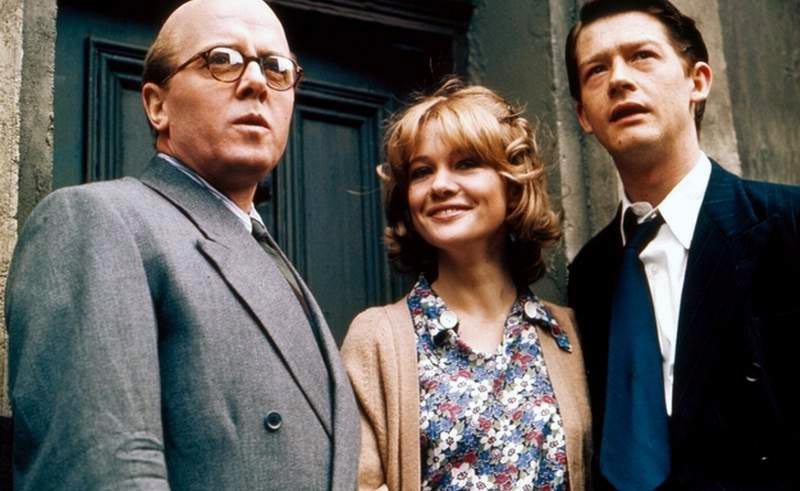 Splitting the difference between murderer and victim(s), Richard Fleischer’s 10 Rillington Place (1971) announces itself as fact almost instantaneously: “This is a true story. Whenever possible the dialogue has been based on official documents.” The inclusion of this statement, delivered via unimpeachable block-lettering against a black background, is important to the American director’s unnervingly objective study of London serial killer John Reginald Halliday Christie (played by a bald-pated, hoarsely toned Richard Attenborough), who is said to have strangled at least eight victims, and was hanged in 1953. Rounding out Fleischer’s informal trilogy of films that root through a killer’s motivations and the subsequent legal response of institutionalization and capital punishment (1959’s Compulsion and 1968’s The Boston Strangler), 10 Rillington Place corrects its predecessors’ bogus psychology and actorly histrionics with a precisely modulated descent into a relationship of protracted manipulation.

Following a shockingly swift example of Christie’s methods in 1944 — an exaggeration of his otherwise limited medical experience to lure ailing women before subduing them with town gas — Fleischer begins his film with the young couple Tim and Beryl Evans (John Hurt and Judy Geeson, respectively) renting the upstairs flat of the serial killer’s building. The barely literate, truck-driving Tim (who has a habit of spinning absurd lies when feeling pressured) and new mother Beryl are just barely comfortable fiscally, so when the latter finds herself pregnant again, Christie swoops in. Fleischer dispenses with the inevitable early, proceeding to split the difference between Tim (as he sinks further into the whirlpool of wrongful accusation and judicial apathy, as deviously orchestrated by Christie), and Christie himself (as he attempts to smooth out all the edges and present an innocent front). Cinematographer Denys Coop operates his probing camera in such a way that you can feel the walls closing in, utilizing a discomfiting gracefulness that renders the titular flat and its surroundings all the more claustrophobic, even airless.

Replete with cruel gestures that a less-than-engaged viewer may find merely perversely humorous, Fleischer’s film effectively deromanticizes the passage of death-by-murder: the manner in which bodies are discovered is so matter-of-fact that just a glimpse at a naked back or high-heeled pair of feet are enough to elicit a gasp. The courtroom scenes function with a similar bluntness: deep-focus master shots that don’t feign legal drama, instead painting the process as nothing but a spectacle to put a stamp on the case and match a man to the noose. Hurt’s performance is exhausting in how heartrending it is, his lack of education and social status trammeling him — just as much as the uncaring judicial system does — as he simply watches, mouth agape.

10 Rillington Place is available to stream for free on Prime (via IMDb TV), Tubi, Pluto, Plex, and other platforms.