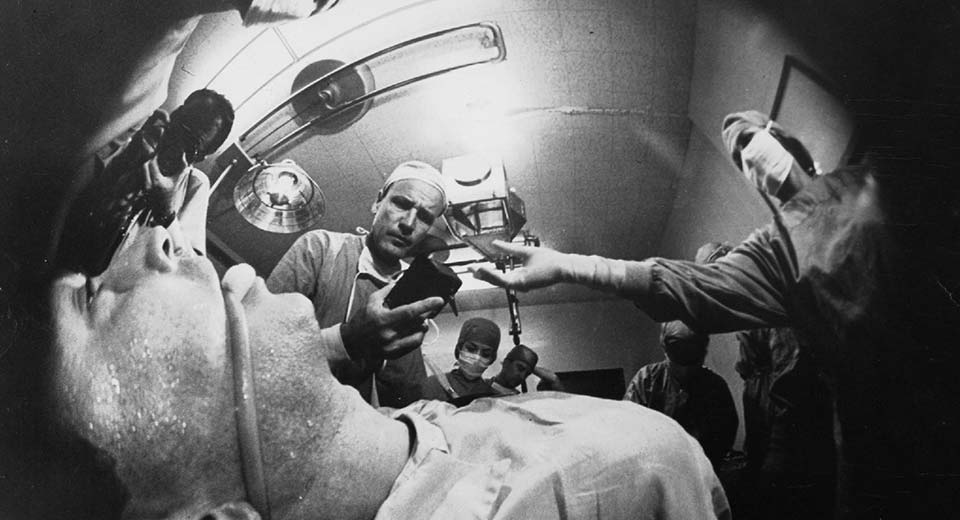 According to his now disavowed 1996 autobiography, Wouldn’t it be Nice: My Own Story: Brian Wilson, the troubled American rockstar, his delusional paranoia growing, entered a movie theater and sat down. On the screen John Frankenheimer’s Seconds, began to cast its strange spell. The film opens with a middle-aged man making his way through Grand Central Station, the camera is tethered to him using a harness that predates the steadicam, holding his face in dreadful close-up as he moves through the stifling morass of a middle class commute—his mundane trip transformed into a dizzyingly stylized nightmare. The notoriously unsettling 1966 film goes on to tell the story of a man who trades his humdrum life for one of his own design, changing his name, his age, his profession, and even his face (opting for the Rock Hudson model). The transformation is provided by a mysterious organization, simply called the “Company.” This extreme makeover has one stipulation, he must leave his old life behind completely. This dream come true doesn’t quite pan out as well as he’d hoped and his past begins to call to him, drawing him back to his old life and toward a terrifying fate.

Sometime during his viewing of the film Brian Wilson figured out what the hell was really going on. Seconds was not a benign work of art from the mind of Frankenheimer and novelist David Ely, but instead, a calculated attack on his sanity by none other than his arch nemesis... Phil Spector. Wilson ran from the theater in terror, screaming, possibly in his iconic falsetto. If you’ve ever seen Seconds, a relentlessly bleak vision of the empty promise that is American life, you can’t really blame him for his reaction. Seconds is the shadow that haunts the lives we all build.

Contemporary viewers might draw a connection between Seconds and the high concept, emotionally raw films of Charlie Kaufman (as both writer and director). The fragility of identity is at the center of the narratives of both, but there is a major difference between Frankenheimer’s film and movies like Being John Malkovich, Adaptation, and Synecdoche, New York. In Kaufman’s films, personal weaknesses lead to their protagonists’ sad ends. Personal and emotional chaos fuses with Kaufman’s conceptual machinations, resulting in climaxes that are more often than not aggressively contrived sentiments—the emotional equivalent of a good indie rock song. In Seconds, however, personal foibles do not create the tragedy alone (although they make it possible), but are helped along by an inhuman corporate entity waiting in the wings, ready to turn weakness into profit.