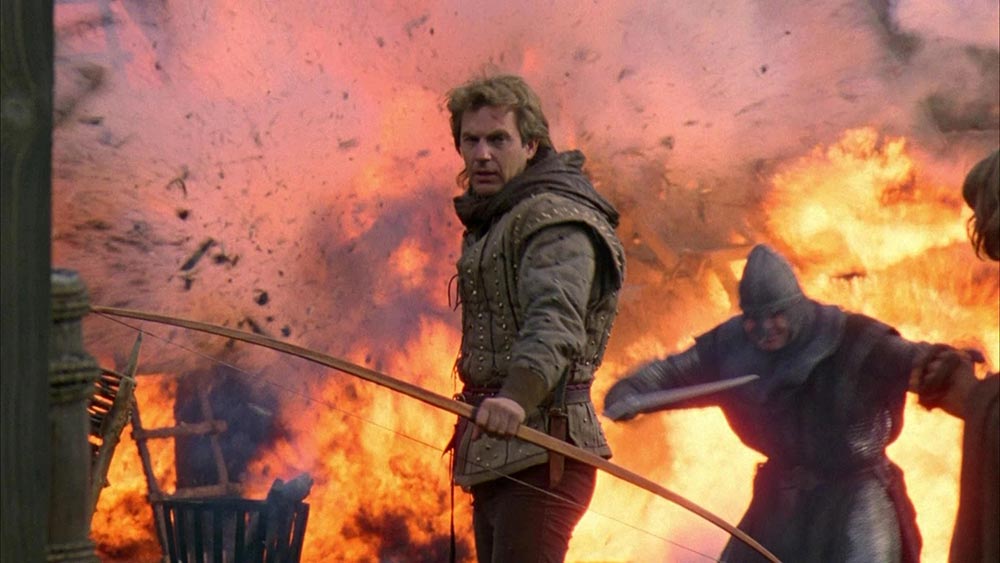 On April 22, 2021, Shrek popped up so frequently across all social media platforms I wondered if he’d died. Turns out it was just the 20th anniversary of Shrek, a film that’s become a touchstone, a sexual identity, and an inexplicable meme-quarry for a generation. Inexplicable to me, that is, as that generation is not mine. I am old, a “geriatric millennial” in clickbait parlance, coming of age when video store rentals were the norm and the closest thing to streaming were low-resolution clips on Microsoft’s Cinemania CD ROM.

So instead today I commemorate the 30th anniversary of a film that, with equal youthful inexplicability, I watched over and over: Robin Hood: Prince of Thieves. It’s a strange yet representative piece of 1990s cinema, a “socially conscious,” bloated take on a historical tale, eschewing earlier versions’ high bravado and derring-do for ponderousness and family drama — except when it whips itself up into action excess with a cartoonishly evil Sheriff of Nottingham and a coup-de-grâce Sean Connery appearance. Michael Wincott, who rasped loudest in the ‘90s, plays a villain. His historical hockey hair reflects an era moving away from, but not out of sight of, the power ballad. It was a blockbuster attempt by a company specializing in mid-budget hits (a category nearly extinct in today’s landscape), whose attempted naturalism only set its Hollywood conventions in relief.

Why did I watch this movie so often as a ten-year-old? Like Mount Everest, probably because it was there. Due to an oddball year-round school calendar, four times a year I was handed off to a random relative’s house for a week. Free from the cares of normal scheduling, after my extended family went to bed I’d stay up til dawn watching whatever VHS tapes were around. Robin Hood: Prince of Thieves was a mysterious overlap at these otherwise disparate households.

Recently, my roommate and I spent actual money to rewatch RHPoT, and it felt so long we called it quits halfway and picked it up the next night. Morgan Creek Productions CEO David Nicksay insisted “there was gold on the page” when in 1990 they dropped $1.2 million on the script less than 24 hours after receiving it, and traces of the film’s original Medieval Indiana Jones intent remain, including the flaming arrow money shot. Things start strong with a daring prison escape and roaring Brian Blessed, before getting literally lost in the woods for an hour as the film dutifully hits the legend’s beats amid shoehorned side plots. Action scenes feel cut-and-pasted throughout, and after every flash of fun, Costner steers things back to business like a stolid teacher returning to the lesson at the front of a rambunctious classroom.

It’s not surprising to learn RHPoT was a troubled production, rushed due to the threat of Fox and TriStar’s looming Robin Hood projects (eventually cancelled) and shortened by waning daylight hours as filming neared winter. Actors barely had time for one readthrough before being thrown on location. Yet initial test screenings were positive; the only problem was that audiences raved not about Costner’s Robin but about Alan Rickman’s Sheriff of Nottingham. (And how could you not, with lines like “No more merciful beheadings, and CALL OFF CHRISTMAS”?) Costner and Rickman respected each other’s performances and saw them as balancing, but it would have been safe to assume that the unhinged villain with a witch assistant would entertain viewers more than the rich kid growing a social conscience.

Nonetheless, the studio had invested in Costner and was determined to refocus audience loyalty. Reynolds was locked out of the editing room, and the studio’s final cut clipped a lot of Rickman and added a lot of Robin. A 2009 extended DVD release reveals that what was cut also nipped an overtly Satanic subplot, possibly to increase the film’s family friendliness. Roger Ebert still criticized the film as too gratuitously violent and morally corrupt for the family market. The strange result of attempting to blend family and action appeal are reflected in the film’s non-merch: Ralston’s legally unrelated Prince of Thieves cereal aiming to capitalize on the film’s popularity, whose arrow-shaped pieces unfortunately “resembled tiny, spotted penises,” and Kenner’s RHPoT playsets, blatantly recycling Star Wars’ 1983 Ewok Villages and using a Return of the Jedi Gamorrean Guard for Friar Tuck in a kid-related cash grab.

Though a snatch of its original score ended up becoming part of Morgan Creek’s studio bumper, the sole tie-in people probably associate with Robin Hood is Bryan Adams’s single “(Everything I Do) I Do It For You” and its accompanying music video featuring clips from the movie. Despite the sappy power ballad declaring loss of free will for emotional motivation, the film’s own romance is inert. Robin and Marian’s initial meeting is closer to kung fu films’ inn confrontations, and the couple’s parting after their Sherwood Forest meet-cute seems better capped with a firm handshake than with yearning.

RHPoT was also knocked as a “message movie,” though if there was a message it was as muddled as anything else in the film; despite claims of brotherhood and equality across race and class, nobleman Robin takes de facto lead of the peasants to ensure the continuing rule of King Richard I. Costner described his Robin Hood as finding "himself taking part in what is virtually a guerrilla war. He doesn't just rob from the rich to give to the poor for the hell of it. He is trying to disrupt the government.” But the film rests uncomfortably on feudal ground, like Costner’s Robin sitting among the Merry Men.

RHPoT did well enough in theaters, but it was the first crack in the armor of Costner’s sterling Hollywood reputation. He and director Reynolds would team up again on 1995’s Waterworld, in which they’d reenact their Robin Hood trauma by once again working in nature, on a crushing schedule, with Reynolds walking away from the project after the studio rejected his cut and made their own changes, only this time to far worse critical response. It’s a testament to either Costner’s strong inner conviction or mulish blind spot that he went a third round of the same with 1997’s The Postman, this time directing and getting into arguments with studio heads. I’d like to believe it’s the former, and look forward to reporting on the 25th anniversary of his post-apocalyptic mail delivery movie next year.

Robin Hood: Prince of Thieves is streaming on HBO Max or for free on Tubi.