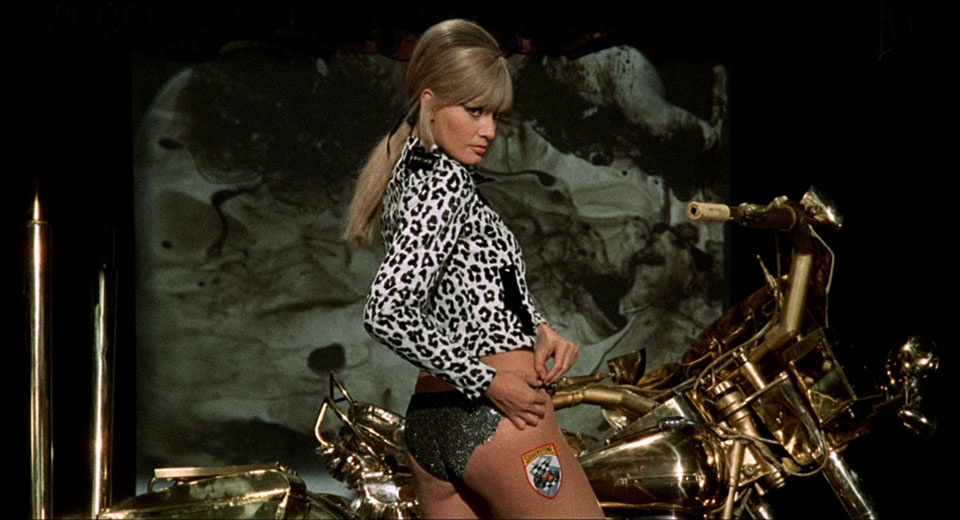 In case the opening shot of the Golden Gate bridge doesn’t alert you, Perversion Story (aka One on Top of the Other) is the rare giallo set in America, and San Francisco is a perfect setting for Lucio Fulci’s sleazy thriller with the heart of a noir. Dr. George Dumurrier (Jean Sorel), head of the failing Dumurrier Clinic, needs money fast. Helpfully, while he’s out of town with his girlfriend (Elsa Martinelli), his wife (Marisa Mell) dies of an asthma attack. Pleasantly surprised by his newfound bounty, the good doctor takes an anonymous tip and visits The Roaring Twenties, a psychedelic strip club, where he sees a mesmerizing dancer who is the spitting image of his dead wife. From there, it gets very Vertigo: the lusty, murderous underbelly of swingin’ ‘68 San Francisco seen through Italian eyes.

Everyone suspects George of killing his wife, but is he just a garden-variety cheating cad, or did he actually orchestrate the death of his asthmatic wife for the insurance money? Sorel plays the dumb-yet-perpetually-smarmy patsy well, up to and including a scene shot in the actual gas chamber at San Quentin Prison. The film’s groovy fashion — including the liberal use of well-placed body stickers as clothes in the strip club — and emphatically San Franciscan setting underline a story fundamentally about the panic over women’s sexuality. It has this in common with most gialli, but unlike its genre brethren (and rare for Lucio Fulci), there is barely any blood or even violence to be found.

Echoes of Hitchcock rattle throughout the film, from the sexy doppelganger plot and Bay Area setting of Vertigo to the psychological warfare of Gaslight. But the film doesn’t just reference the past; it’s eerily eloquent regarding our modern age, too. “The papers are always full of… fake news,” the unfaithful husband coolly says in the first reel. This kind of poisonous arrogance runs deep.