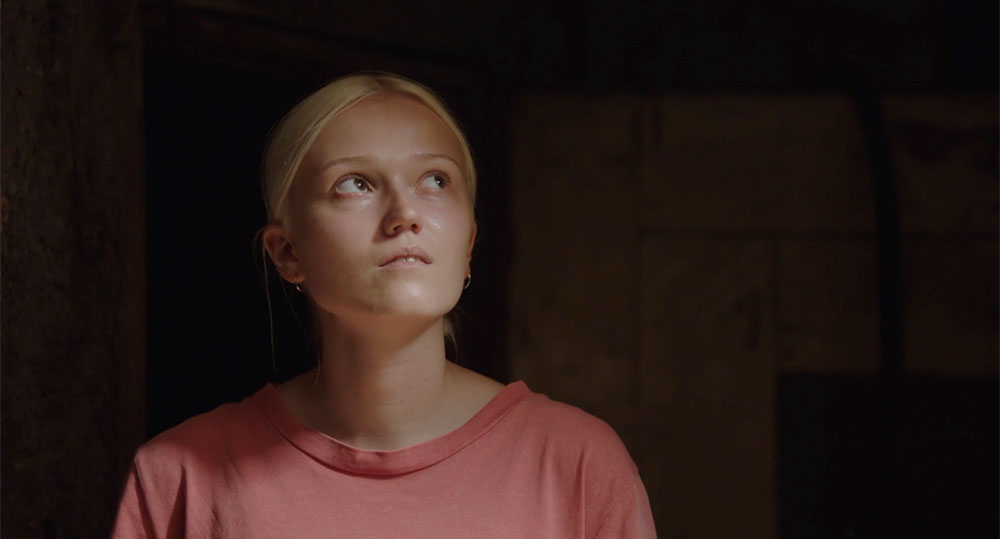 Lithuanian filmmaker Laurynas Bareiša’s harrowing first feature, Pilgrims, denudes the crime procedural of its clinical distance and suppresses its appetite for viscera. What’s left is a profound study of survivor’s rage left in the wake of violent tragedy. Bareiša is stingy with the details of a murder that forever warped his two main characters, Indre (Gabija Bargailaite) and Paulius (Gabija Bargailaite), each of whom fight despair as they visit literal “scenes of the crime” together in search of undefined closure. Every new detail revealed through Bareiša’s subtle dialogue complicates their relationship to each other, the crime, and its victim, further obscuring their investigation’s purpose. Bareiša spoke to Screen Slate last week in advance of the film’s North American premiere at ND/NF. The conversation has been edited for length and clarity.

Patrick Dahl: Congratulations on this wonderful, devastating movie. You had previously directed several shorts, but at what point did you decide that this was going to be your first feature?

Laurynas Bareiša: When I look back, it seemed like I was preparing for it through all my short films, because they are stylistically and thematically all connected. And I think they were just leading me towards this story. Pilgrims feels like an end of some chapter of my life, because I did five short films, and they were like, one year apart one after another. They were like a research project both thematically and visually into this direction. Pilgrims is like my graduation or thesis.

PD: I'm not sure how it's treated in Lithuania, but in the United States there is an ever-growing genre called “true crime.” Is this familiar?

PD: Is that genre an interest of yours?

LB: True crime was more interesting as a literary genre, you know, like In Cold Blood and David Simon's Homicide. True crime in literature made sense to me. I didn't find good references or influences in modern cinema, like documentaries or anything like that. I have a rule that I don't show the graphic, physical violence. I tried to find all other ways of talking about it without showing it because I think showing it kind of normalized it. I have a big problem with that. I think even filmmakers who have good intentions of speaking out against violence [end up] normalizing it. Also, I didn't want to show the killing and the rape in Pilgrims because I feel that there's too many depictions of them in other films, which then desensitizes us. The haunting effect of violence is more interesting. I want for people to be more afraid of violence than to understand the killer. That understanding should stay, in a sense, mysterious and forbidden. When you show it, it becomes less forbidden, I think.

PD: That's one of the predominant ways that your approach was really refreshing because so much of true crime storytelling revolves around understanding the killer.

LB: Trying to understand the killer is so unfair. You know, talking about and showing these crimes somehow glorifies the killer. I really admire the story about the person who burned this temple in ancient Greece. He yearned to become famous, so everybody intentionally forgot his name. So I think with crime, notoriety and celebrity status of murders is unhealthy.

PD: You have a lot of very observant long takes. I was wondering what the rehearsal process was like, because your staging of the actors seems so precise without feeling overdetermined.

LB: My first work in cinema was camera assistant and cinematographer and I still work as a DP. So I take a lot of the position of a camera and the framing on myself. I developed an understanding with the cinematographer who worked on Pilgrims, Narvydas Naujalis, that he was more of a camera operator, and he was responsible for the lighting. We had these night setups and we wanted to have this natural light, or natural synthetic light (flashlights, streetlamps) in the darkness, so he had a lot of work to do. It was difficult to achieve.

I tend to do a lot of pre-production by myself. I just spend a lot of time on location, trying to figure out all the angles. And then when I'm on the set with the actors, we do one rehearsal without anyone on set and do all the blocking without the camera. And then because I have all this knowledge of the location of the shots we do this kind of test run with the camera. I really prefer to work with actors on set to decide how we’ll move that day.

PD: The balance of warm and cool colors in the same frame throughout the film stands out. It's an extremely beautiful film, visually, in terms of the naturalistic lighting. Obviously the journey, the plot, the narrative is very harrowing and disturbing in contrast.

LB: I really was aware, you know, not so much of a true crime genre, but more of this Nordic noir kind of feel that I didn't want. For example a cool palette or using a lot of blue light which gives this notion that this is going to be like a detective story, or this is going to be a revenge story. I wanted to have all the shades because thematically the story has all these shades you know. You have all the coolness and the tragedy of a crime but also we have scenes with little kids that have all these human relationships. I wanted to avoid this tradition of showing this provincial life as kind of dangerous. This suburb is quiet, it's quite well off, they have an airport and they work and own houses.

PD: I wanted to ask how you came to shoot in this particular town (Karmėlava, in central Lithuania). I read that it's very small.

LB: It's my hometown. I knew all the back streets and everything, all of these kinds of strange places like this hotel, the cemetery and the school. When a character says, “That house burned down,” it was a reference to real events that I remember from my childhood. I wanted to keep the geographical logic. Of course, we didn’t need to have that geographic logic in the film, but I just wanted to have it because we lived there for a month, and the actors spent time there. And we just went to all these places for the actors to understand them and to kind of have these meanings.

PD: The pace of revelations really grabbed me because it’s gradual, but in this really intriguing way. And I think that because of the pace of each individual scene, there is time and space for audiences to process each revelation instead of just rushing to the next revelation. When you were scripting, how did you think about pacing the story, from start to finish?

LB: I was always very aware that I wanted the film to begin with the action already started. I didn’t want to have heavy exposition of the characters deciding to go on this trip. It was an advantage for me that they knew each other but are spending time together after some time apart. So there’s time for them to talk about some things but not everything. And then all the new characters that come in after the first 20 minutes give them the opportunity to reveal some things but not everything. But I knew I could not keep the viewer in the dark for too long. It’s not a detective story where they solve the crime. In a way it’s a detective story where they solve the emotion. I wanted to use information as a catalyst for emotion. I wanted the viewer to develop the habit of connecting what they are seeing to events in the story that aren’t shown. It doesn’t work if a character says, “This is where he died.” Those moments had to be silent.

Pilgrims screens tonight, April 21, at the Museum of Modern Art, and on April 28 at Film at Lincoln Center, as part of New Directors/New Films 2022.