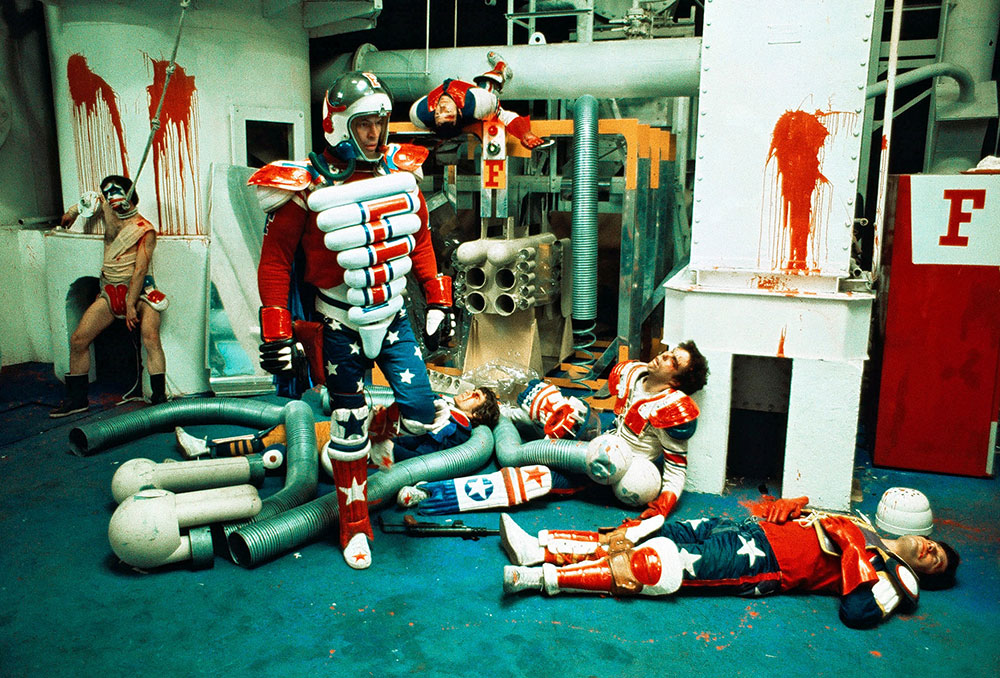 After documentary footage of riot cops evicting minorities and being welcomed with petrol bombs, a beer-guzzling sheriff dons a star-spangled suit of armor and conducts a traumatic home invasion on a Black family—the opening of expatriate polymath William Klein’s 1969 US foreign policy satire Mr. Freedom leaves no ambiguity as to where its sympathies lie. Dubbed the “most un-American movie ever made” by Jonathan Rosenbaum, Mr. Freedom is so anti-American that—not unlike Team America: World Police—it almost turns into its opposite.

As we follow Mr. Freedom’s daily routine, a clear picture of Klein’s anti-imperialist analysis of global power relations emerges: the hero’s headquarters, the Freedom Building (precursor to the Freedom Tower?), also houses the corporate offices of General Motors, United Fruit, and Unilever; his French counterpart, Captain Formidable, helped orchestrate the 1967 right-wing military coup in Greece; one of Mr. Freedom’s many slogans is “Everything I destroyed, I will rebuild better,” a distillation of the United States’ attitude towards the developing industries of every Latin American and Southeast Asian country it has invaded since WWII. Although the jokes are all on point, the way they’re delivered suggest that they’re not meant to elicit surprise or outrage, but a knowing chuckle. Instead of setting out to convince someone of something, the movie takes the viewer’s sympathy for granted, shaking its head at its friends with a resigned smile and saying, “Man, America’s messed up. Good thing we’re not America.”

Thanks to Klein’s early Parisian connections (studying under Fernand Léger and having his first book published by Chris Marker), he was able to collect a cast of familiar cinema-vanguard faces. Delphine Seyrig (introduced to Klein by Alain Resnais) plays an anti-Communist commando who defects to the side of the Soviet supervillain, Muzhik Man (Philippe Noiret, whom Klein met when working on Louis Malle’s Zazie dans le Métro). If you keep your eyes peeled during the proto-Trump rally scenes, you might recognize the floppy face of Pierre Baillot, the hapless theater troupe leader from Jacques Rivette’s Out 1. And let’s not forget Yves Montand as Captain Formidable and Serge Gainsbourg as the Freedom campaign’s staff pianist.

So is Mr. Freedom a great satire? Did it open the masses’ eyes to the horrors and absurdities of American Cold War imperialism? Probably not. Did it give activists fresh discursive ammunition to ridicule and deflate its jingoist rhetoric? Maybe. Did it become a cult classic among a small group of sympathetic admirers thanks to its rediscovery and rerelease decades later? Without a doubt.