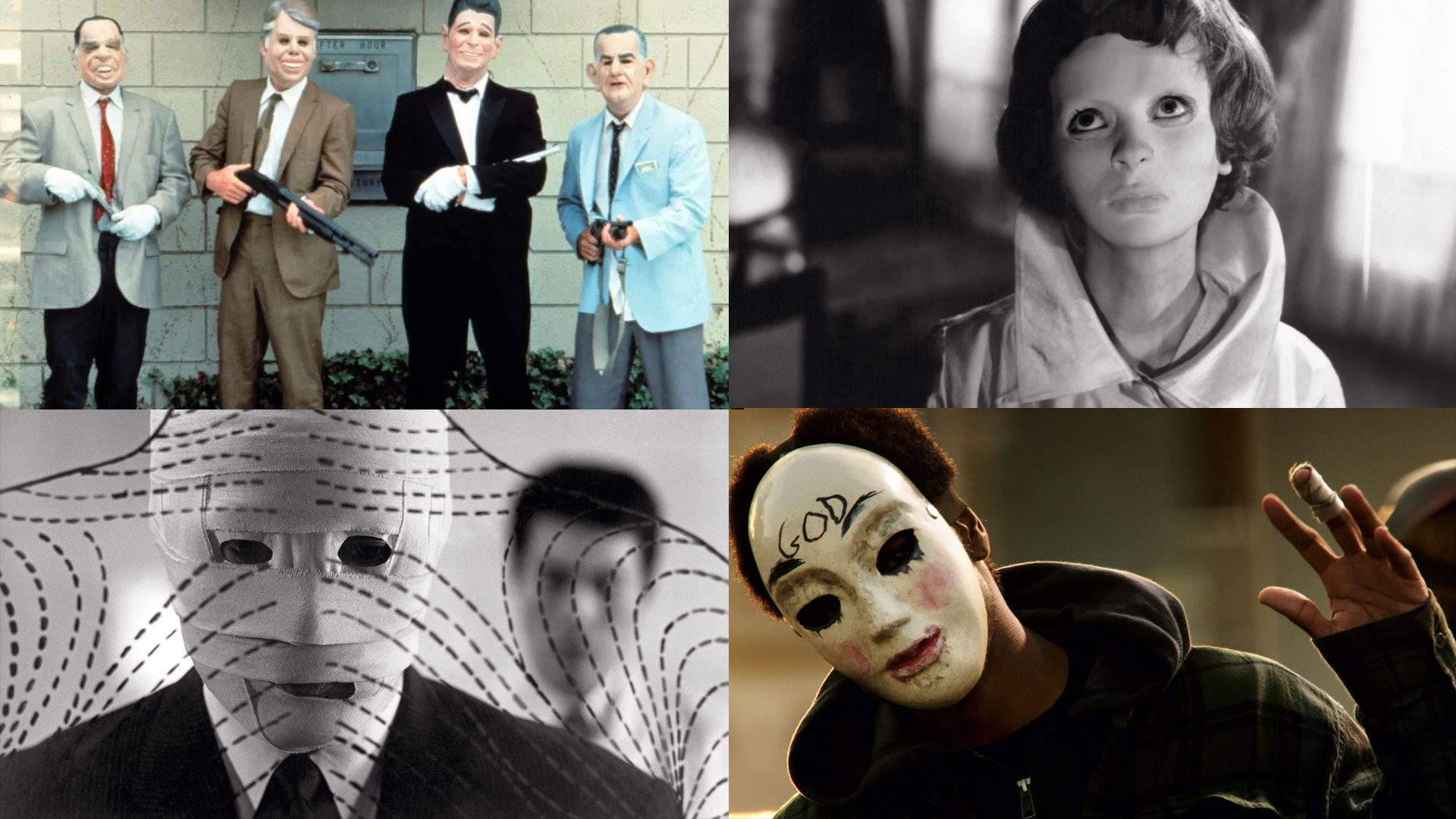 From The Masque of the Red Death to The Mask of Zorro, from Fantômas to The Phantom of the Opera, from The Face of Another to Face/Off, masks have been an aesthetic fixture of the silver screen since its infancy. Bank robbers and revolutionaries have used them to hide their identities while superheroes and psychopaths have used them to gain new ones.

In 2020, when not wearing a mask in public raises eyebrows, everyone is getting a taste of the allure of anonymity. In his preface to Frantz Fanon’s Black Skin, White Masks, Homi Bhabha writes of the moment during the Algerian war of independence when women’s participation in the revolutionary struggle transformed the veil from a symbol of subjection into a symbol of resistance. Similarly, when protests over the extrajudicial killing of George Floyd erupted in May, the COVID mask instantly changed from a symbol of fear to a symbol of defiance. As millions of Americans decided they’d had enough of quarantine, their public health concerns conveniently dovetailed with an awareness of the advantages of covering your face when expressing dissent in a surveillance society.

Masks can evoke mystery, anonymity, impunity, and, in the case of The Mask (1994) — in which a pencil-pushing white dweeb becomes a zoot-suit-wearing, hip-swinging personification of raw id — racialized fantasies of hypermasculinity. In some cases, the mask becomes a way to restore a lost identity: in Georges Franju’s Eyes Without a Face (1960), after a young woman’s face is disfigured in a car crash her megalomaniac physician father hides her behind a blank mask and works obsessively to give her a face transplant; in Hiroshi Teshigahara’s The Face of Another (1966), a man whose face has been badly burned in an industrial accident receives a realistic latex mask that ends up transforming his personality; and in John Woo’s Face/Off (1997) John Travolta and Nicolas Cage surgically steal each other’s faces to infiltrate each other’s lives. What Franju achieves through strategic concealment, Teshigahara achieves through impressive effects makeup and Woo through pure acting, as Travolta has to adopt Cage’s mannerisms and Cage has to tone down his histrionics to achieve Travolta’s contained madness. 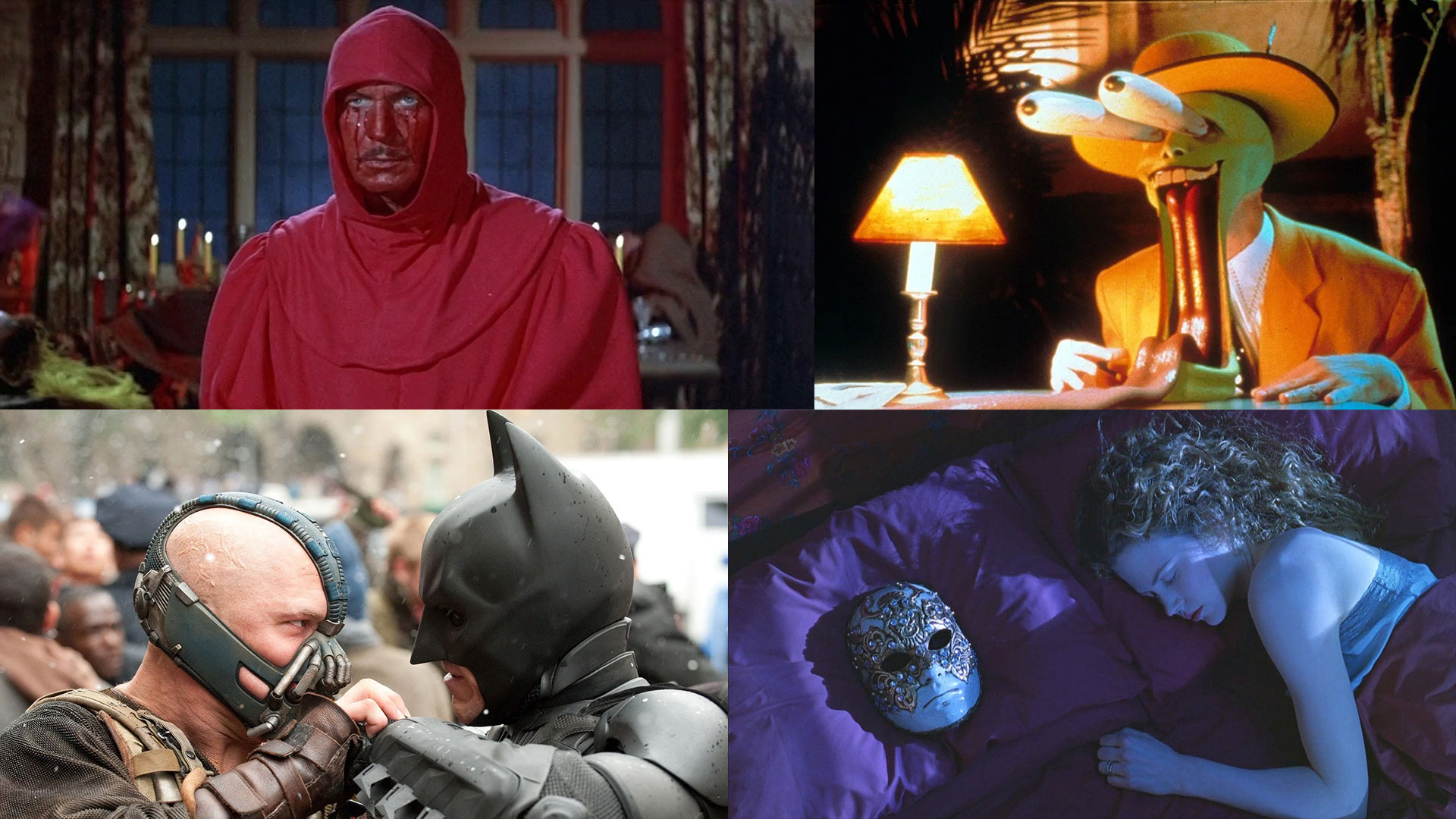 The mask is, of course, a favorite accessory of the vigilante. Billionaire Bruce Wayne puts on a mask, becomes crime-fighting Batman. But Wayne is at the apex of the social hierarchy of Gotham, and Wayne Enterprises and the Wayne Foundation are just the economic and philanthropic arms of the Wayne-Batman status-quo-affirming apparatus. Thus, when Wayne goes out at night as a one-man SWAT team, he is only continuing his daytime work of buttressing Gotham’s existing social order. In Christopher Nolan’s version of the Batman saga, masks tend to have practical functions: the mask of Cillian Murphy’s Scarecrow protects him from his weaponized neurotoxin gas and that of Tom Hardy’s Bane supplies his body with analgesics. Wayne himself wears a mask for much the same reasons that medieval executioners have traditionally been considered to wear them (although, as Hilary Mantel points out, in reality they rarely did): to escape retribution from enemies or a hostile citizenry.

Masks are a powerful visual motif when worn by large groups of people. Recall the scene in V for Vendetta where Londoners in Guy Fawkes masks flood the streets to watch Parliament explode, or all those scenes in the Purge series where armed citizens (or Russian and Afrikaner “murder tourists”) show up as Uncle Sam, a gorilla, or a creepy deer. But while The Purge is about fanatical individualism, V for Vendetta is about becoming part of something bigger; all those Fawkes masks are identical, while somehow in the Purge universe, instead of a market glutted with the same mass-produced Freddy Krueger and Trump masks that dominate Halloween, everyone’s costume is painstakingly homemade.

Masquerade balls are an obvious occasion for concealing your face. In Roger Corman’s camptastic Edgar Allan Poe adaptation The Masque of the Red Death (1964), Vincent Price is the cartoonishly cruel Prince Prospero, who has a passion for Satan. When he throws a costume party for the aristocrats in his realm, a masked figure shows up in a red robe. Prospero becomes convinced that this audacious guest is Satan himself but discovers that the answer is far more terrifying. In Eyes Wide Shut, basic bourgeois Tom Cruise finds himself out of his depth at an elite orgy in a Westchester villa. Echoing the waning years of another empire, the swanky swingers wear Venetian masks.

Remember the Ex-Presidents from Kathryn Bigelow’s tongue-in-cheek crime thriller Point Break (1991)? Four surfers-cum-bankrobbers disguised as LBJ, Nixon, Carter, and Reagan who clean out one bank after another in 90 seconds flat? The chase scene where Patrick Swayze in tails and a floppy latex Reagan mask parkours through backyards and alleys in Culver City? Or is it Redondo Beach? The geography is wildly inaccurate, down to the fact that every shot of someone actually riding a wave was shot in Hawaii. It’s Oahu masquerading as Malibu.

In his seminal study The Presentation of the Self in Everyday Life, Erving Goffman quotes sociologist Robert E. Park:

It is probably no mere historical accident that the word person, in its first meaning, is a mask. It is rather a recognition of the fact that everyone is always and everywhere, more or less consciously, playing a role … In a sense, and in so far as this mask represents the conception we have formed of ourselves—the role we are striving to live up to—this mask is our truer self, the self we would like to be.

Thus we don’t say that Bruce Wayne is pretending to be Batman. He is Batman; or rather, it is no less ontologically true that he is Batman than that he is Bruce Wayne—both are personas, masks, social identities. But then is Patrick Swayze Bodhi, and is Bodhi Ronald Reagan? Maybe Bodhi is no more an imposter Reagan than Reagan himself was. And are we merely performing a role as responsible citizens when we don our own masks every day?