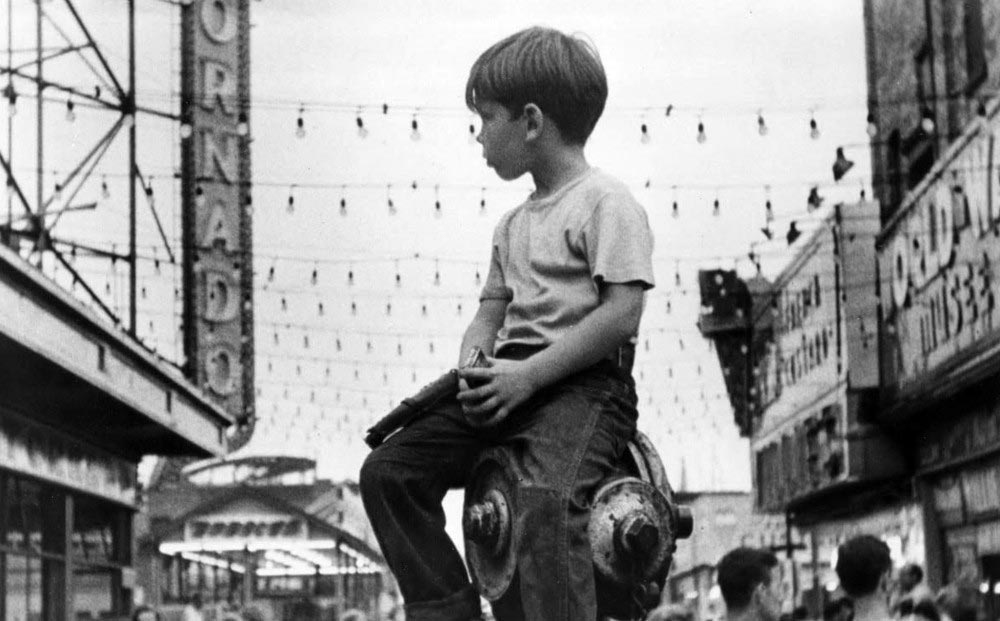 Little Fugitive (1953) is the vérité-style story of Joey (Richie Andrusco, in his only film role), a seven-year-old Brooklynite who is tricked into thinking he has killed his brother with a toy gun. He goes on the run to Coney Island, and we get to see the flashing arcades, the rides, and the ocean and beach through the big eyes of a child.

In 1953, filmmaking outside the studio system was almost unheard of; Little Fugitive was a trailblazing independent American production, largely due to the ingenuity of director Morris Engel,who wrote and directed with his wife Ruth Orkin and collaborator Ray Abrashkin (credited as Ray Ashley). Engel was a former Navy photographer, a leftist, a member of the Photo League, and a friend of Stanley Kubrick. In order to make a movie with almost no funding and no stars, Engel and Charles Woodruff developed what was, in essence, the first Steadicam prototype: a fully-portable, wearable 35mm camera that would deliver smooth, professional-caliber images. Engel used this new camera rig to capture the rhythms of childhood, putting the audience right into Joey’s confused state of mind. One other benefit of Engel’s “hidden” camera set up: thousands of unsuspecting New Yorkers visiting the beach for the day became an army of extras.

The film was a modest financial success, but its influence is ubiquitous. Kubrick loved Engel’s camera set-up so much that he borrowed it for his own projects; Jean-Luc Godard sent a producer to meet with Engel and check out the system as well. The impact of Little Fugitive can clearly be felt on a film like The 400 Blows (1959), with its sensitive and inquisitive portrayal of childhood. Francois Truffaut himself even said, “Our New Wave would never have come into being if it hadn’t been for the young American filmmaker Morris Engel who showed us the way to independent production, with his fine movie Little Fugitive.”

Little Fugitive screens on 35mm this afternoon at 4:30pm at Film Forum as part of the series “NYC’s Movie Renaissance 1945–1955.” It is also available to stream on Criterion and Kanopy.