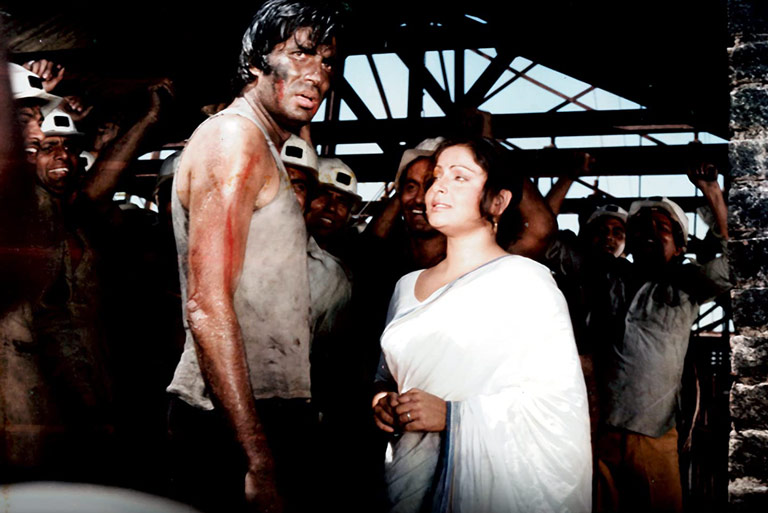 Heat. Dust. Smog. Sweat. Gray. Brown. Black. This is what paints the canvass of Yash Chopra’s Kaala Patthar. It’s also what constitutes the life that Vijay Singh (a lanky unmistakable Amitabh Bachchan, who towers over everyone in the movie) has fallen into after being disgraced as a cowardly sea captain who abandoned his crew. Part inspired by the Chasnala Mining Disaster and part re-imagining of Joseph Conrad’s Lord Jim, Kaala Patthar released in 1979 amid a transitional period in India’s political and social history, which saw a decade of grand change, national emergencies, and political betrayal come to an end.

Indian cinema is much more clearly related to the “state of the nation” than Hollywood is to American politics. The rise of Amitabh Bachchan in the 70s as a bonafide superstar matched notch for notch the rise of India’s influence and social and industrial upheaval amid the Indira Gandhi administration. India’s first nuclear-missile testing, its first war with Pakistan in 1971, and its increased presence on a global military stage matched with Bachchan’s rise to fame via action vehicles like Zanjeer, Deewaar, and Trishul.

Socially conscious and visually brilliant, Kaala Patthar represents possibly the most gorgeous film in Yash Chopra’s repertoire, despite its canvas being much murkier and pale than his trademark lush mountainscapes of the Alps and Kashmir in Kabhie Kabhie or Silsila. The lighting of the film, especially in the mines, signals a strong sense of space, reminiscent more of tunnels and alleyways in noir cinema, which become really effective in the film’s exhilarating final thirty minutes. Chopra’s contrasts in color – the dust and clouded diffuse sunlight of the mines where workers toil away, with the bright gardens and clean whites of the callous billionaire mining magnate Seth Dhanraj’s office – is unsubtle signaling of economic disparities in the nation.

Socialization and nationalization of many of India’s industries in the 70s lead to both reform but also a lot of corruption. There is a deep sense of betrayal of the people within Kaala Patthar that is reflected in its lead’s search for redemption for the cowardice of his past, and the laborers who were the backbone of India’s industrial rise, seeing a government and private interests value profit over people. After Dhanraj’s chief engineer says they can’t build a new mining tunnel without putting 400 workers’ lives on the line, Dhanraj asks about the finances. “We’ll lose 40 lakhs [400,000 rupees],” he’s informed. Dhanraj doesn’t miss a beat, condescendingly berating his engineer for being poor at math – “Don’t you know that 40 lakhs is much larger than 400?” And so the story goes…