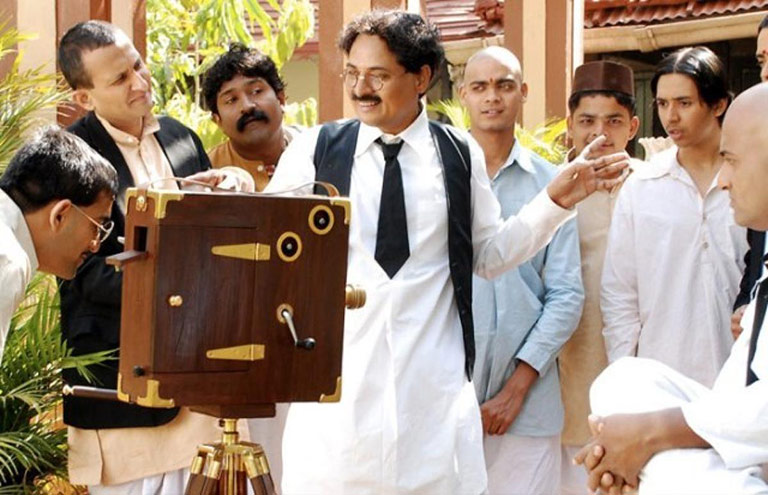 The largest film industry on Earth begins here. With Harishchandrachi Factory, a deftly sly comedy featuring a brilliant central performance by Nandu Madhav as the famed “father of Indian cinema” Dhundiraj “Dadasaheb” Phalke, director Paresh Mokashi traces back the history of India’s first movie, which sparked the creativity of future artists and angered the conservative Hindu skeptics of the small Maharashtrian town where it all began. Harishchandrachi Factory, in the Marathi language, was India’s official selection for the 2010 Oscars and arrived just a few years before the Indian film industry celebrated its centennial in 2013.

After watching Alice Guy-Blaché’s La vie du Christ (1906)in a small tent-theater in Bombay, Dadasaheb Phalke was inspired to create his own motion picture. Using British funds, he made Raja Harishchandra (1913), which recounted the life and times of the ancient king of the Ikshvaku dynasty. Mokashi’s film, guided by observational humor and family in typical Marathi style, depicts the events of its creation with a tongue-in-cheek farce that sees Phalke’s relatives terrified of his ability to make pictures “move” as a conjuring of black magic. It is a fitting beginning to India’s cinematic history, which is rife with allusions to Hindu mythology and India’s dynastic past.

Like the Kurosawa films that take place right before Japan’s transition into a modern military power, the people and places in Harishchandrachi Factory are at a constant tug-of-war between traditional customs and the slow creep of Western influence into urban life. This influence foreshadows how India’s film industries would incorporate traditional Indian structure of storytelling, melodrama, music, and dance with Western movements like noir, screwball comedy, and later during the “Golden Age,” Neorealism. It also brings to light the dependency on the British for financing and equipment required to produce the first feature film, and how imperialism placed a stranglehold on the nation’s ability to organize into a national industry, which thrived post independence.

The simplicity of the movie’s storyline and the brisk pacing lend to it being one of 21st century Indian cinema’s most eminently watchable films for the entire family – a history lesson by way of a theatrical comedy and an underdog story. Through Madhav’s twitches and great comedic timing and the hanging cloud of the British Raj overhead, Harishchandrachi Factory deftly blends recreation of one of India’s most significant cultural moments with life of a transitioning nation under imperialism.