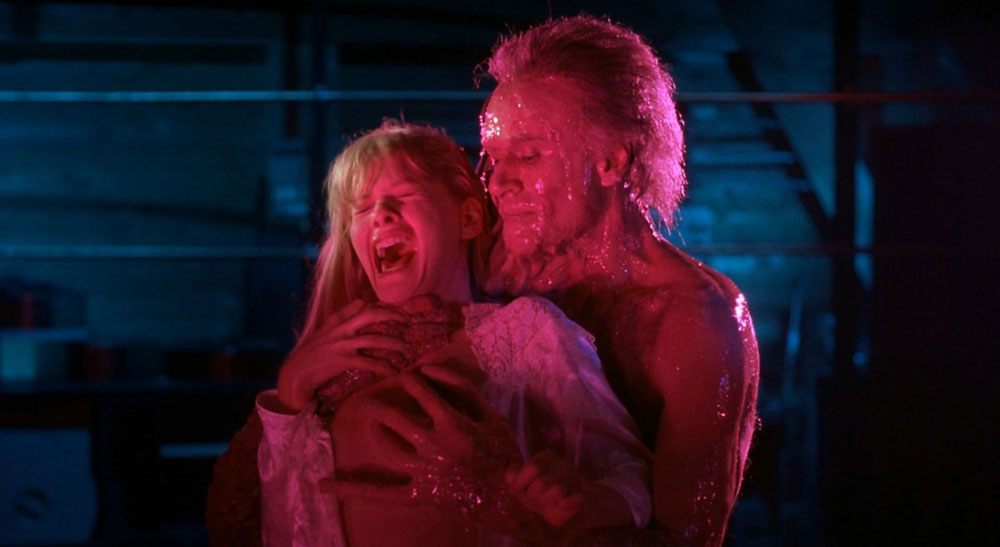 Pride of Chicago Stuart Gordon followed up his debut, the surprise hit Re-Animator (1985), with another loose adaptation of an H.P. Lovecraft tale, From Beyond (1986). Not quite the household name that its predecessor eventually became, the film succeeds in equal measure as a digest of the adolescent fascinations that Gordon lovingly deployed throughout a righteously independent career. Reveling in the dormroom profundity of cosmic ruminations colliding against pop culture worship and sexual neuroses, Gordon injected a warm absurdity into Lovecraft’s tales that preserved their speculative gifts while mothballing their mirthlessness.

Re-Animator star Jeffrey Combs returns to the Gordon-Lovecraft matrix as Crawford Tillinghast, a scientist who, alongside his creepy mentor Dr. Pretorius, has been reaching across dimensions from the attic of a gothic mansion. The mad-science gadget fetishism that kicked off with the James Whale Frankenstein films is lovingly recreated by Gordon in the Pretorius home laboratory, with the modern addition of a computer running data from the bulky gray boxes shouting through candy-colored lights. The centerpiece of their experiments is The Resonator, a fluid-filled column and glowing sphere topped by ominous tuning forks that tear at the frontiers of known physics. The machine stimulates growth in the pineal gland, an untapped sensory apparatus capable of perceiving the worlds beyond our space-time.

Once engorged, the pineal gland reveals horrific creatures folded into higher dimensions, which had always surrounded humans at every moment but were undetectable by our natural faculties. For Pretorius, the quintessential hubrist with a PhD, this fissure between worlds provides a portal of ascension to higher planes of existence. When he disappears into these realms, Tillinghast is charged with his murder. An experimental psychologist (Barbara Crampton) secures his release and returns the traumatized suspect to the scene of the crime to power up The Resonator and prove his account of Pretorius’s disappearance. Gordon then swings us into a haunted house romp while the pair (plus Dawn of the Dead’s Ken Foree as a supervising cop) and their raging glands encounter otherworldly fauna and newfound impulses toward kinky sex.

Lovecraft began his 1920 short story “From Beyond” with the phrase “Horrible beyond conception” a tidy three-word encapsulation of the problematic weird fiction master’s grand theme: the human imagination’s confrontation with its limitations. His best work offers up undescribed and indescribable cosmic entities that drive the beholder insane with incomprehension. Gordon’s adaptation is more grounded in its collection of monsters, including the veiny, gooey body horror of Pretorius’s transformation, though some of the most titillating moments of the film feature no effects other than some colored lights and closeups of actors anticipating The Resonator’s horrible magic. Gordon embellishes the story with weird sex in contrast to Lovecraft’s notorious coitophobia. Sufficiently stimulated, the pineal gland burrows through Tillinghast’s skull and emerges like a clitoris through his forehead. Gordon offers yet another genre celebration as the protruding gland sends Tillinghast on a search for human brains to devour. The sequence is a minimovie within the movie, another celebration of genre filmmaking and its ability to shock, titillate, and laugh about the Big Questions.

From Beyond screens tonight, January 24, at Nitehawk Cinema Prospect Park on 35mm. 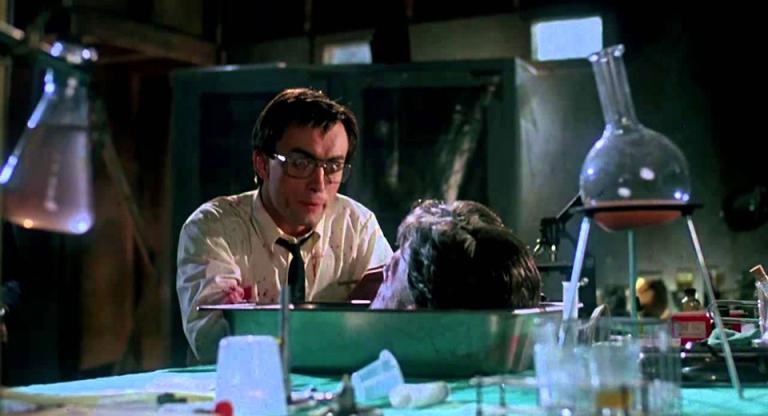