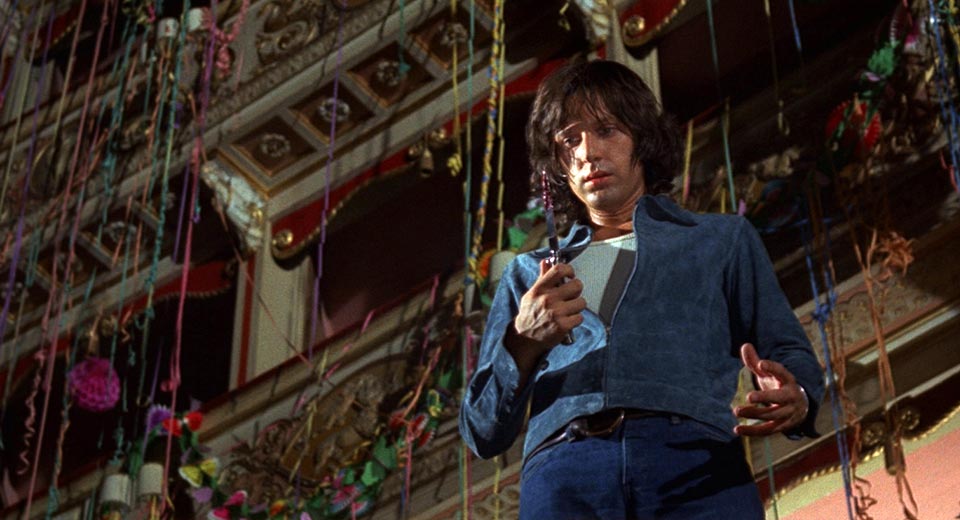 Dario Argento intended 1971 giallo Four Flies on Grey Velvet to be his swan song to the genre, but after the poor reception of 1973’s clunky comedy The Five Days he came running right back (with Deep Red and Suspiria , no less). In Four Flies , hunky young prog drummer Roberto confronts and accidentally kills a stalker, only to be photographed in the act by another stalker masked in creepy child-face. Growing paranoid, Roberto tries to find out who set him up, slowly realizing a better question might be why. As the stalker turns killer and circles ever closer, Roberto realizes they’re after something more sinister than blackmail.

Despite the grim premise, Four Flies’ constant humor hints Argento’s mind was on his upcoming comedy. Outlandish supporting characters populate the city including a morose, bumbling mailman, a flamboyantly gay private eye, and two beatnik sleuths named The Professor and God. Late in the film the beatniks meet Roberto at a Funerary Art convention—featuring Death as highly stylized product, it’s a silly microcosm of the genre. Amidst mod baroque coffins the beats offer him advice, foreground detective work dwarfed by background slapstick, including a salesman assuring a customer worried his green sarcophagus fits ‘too tight’ that no customers have ever come back with complaints.

Likely because it was supposed to be farewell, Argento went for broke pushing genre convention and visuals to their extreme. Four Flies utilized two different special slow-motion cameras, one to capture a bullet’s trajectory for dramatic effect (a first in film), and another slowing down the final horrific comeuppance to beautiful abstraction. A plot point even Argento considered ‘too fantastic’ – lifting the last-seen image from a dead retina (the titular ‘four flies’)—was included because SFX wizard Carlo Rambaldi showed him how amazing the graphics looked. Impressionistic editing turns day instantly to windy night, leaving a woman in a crowd suddenly alone and vulnerable. Identity blurs as we become killer, victim, even murder weapon – we are the knife slamming down on a hapless person, followed by a fall down stairs directly echoing Psycho‘s infamous shot. The only person whose point of view we don’t see is leading man Roberto’s—we voyeuristically experience the killer’s pleasure in his torment, watching him wear down over the full course of the film. With one ironic exception—Roberto’s repeating nightmare of a man about to be beheaded, the blade flashing closer each time. These prophetic manifestations of his anxiety become the film’s gruesome capper, Argento literally going out with a bang.